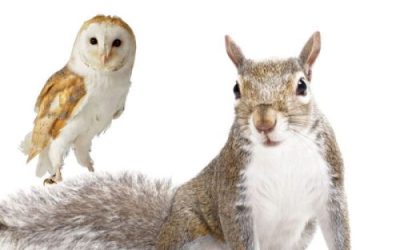 Are squirrels afraid of owls? If you have a squirrel problem you’re probably looking for a really good way to get rid of squirrels from your yard.

Squirrels are afraid of owls as they are a natural predator for them in the wild. Depending on the species owl will hunt and kill squirrels in both daylight and at night. Squirrels are most vulnerable to owl attacks when they are on the ground. Squirrels will be deterred from an area if their senses detect an owl close by.

Let’s take a look at how you can use this knowledge to keep squirrels away from your garden.

Owls are carnivores which means they survive on a diet of only meat. This meat is made up of smaller mammals, insects, and birds. Squirrels are the perfect small animals for Owls to hunt as they live in trees, close to the owls.

Not all owls will eat squirrels. The size of the owl will depend on whether they eat squirrels or not. Smaller squirrels will stick to smaller insects and mammals such as mice.

This list isn’t exhaustive, and most squirrels will attempt to hunt a squirrel if food is scarce. In this case,, smaller owls may try to attack the smaller young squirrels.

Owls are usually nocturnal animals, and squirrels are most active during the day. That means they’ll have more success killing squirrels during the dawn and dusk hours of the day.

You can use a plastic owl decoy as a way to get rid of squirrels from your yard.

The benefits of using an owl decoy to scare off squirrels are that they are:

You want to buy a large decoy owl to make sure it’s as realistic as possible. If a squirrel sees a large owl it’s running for its life. This decoy owl pack is one of the best-rated on Amazon.

You also want a decoy owl that has glass or reflective eyes. This is what will catch the squirrel’s attention and scare them away.

Owl decoys are great for using as part of a Halloween display to keep squirrels away from your pumpkin displays.

The Best Way to Use an Owl Decoy

The best way to use an owl decoy is to situate it in places where an owl would naturally rest. You want to place them up higher than the area where the squirrels are in your yard. That means putting them onto high tree branches, roofs, or outbuildings.

If you have a large yard, you may need two or more owls to deter the squirrels.

The problem with owl decoys is that often only work for a short period of time. Squirrels can easily become accustomed to these decoys and see that they pose no threat to them.

If this happens to you then try to move the decoy around your yard every so often. Or take it down for a few days at a time and then replace it.

Another way around this is to try and play squirrel sounds into your yard. This will help to make the squirrel feel threatened by both their sight and sound senses.

Some owl decoys have solar-powered eyes which are easier to see at night, or even a head that moves in the wind. These extra features can help to deter squirrels for a bit longer (This model has both features).

Hanging an owl decoy up can help to provide natural movement which will spook the squirrel nearby.

How effective are owl decoys?

The effectiveness of your owl decoy will depend on how determined your squirrels are.

For best results use the tips above for the best placement and to stop the squirrels from becoming accustomed to the owl decoy. If you set up the decoy and just leave it, then it will only be effective for a few days to a week, before the squirrel realizes it’s not a threat.

The idea is to make the squirrel feel threatened. If they don’t, then it won’t work.

Using a decoy owl is usually one of the first steps in trying to deter squirrels from your yard. You’ll likely need a tactical approach because squirrels are savvy. Using an owl decoy alongside other natural methods will help to keep the squirrels away for good.

Alternatives to an owl decoy

If an owl decoy does sound like the right deterrent for you then why not try another animal. You can buy devices that imitate fox and coyote eyes and growls. These can work pretty well if you have a lot of ground squirrels in your area. This is one of the bestselling on Amazon.

The problem with the devices is that you’ll likely need to use them every now and again just like the owl decoy. This is so the squirrels don’t become accustomed to them.

A few readers have also had success using an ultrasonic pest repellant that you simply plugin (This one gets rave reviews). These devices emit sounds that we humans can’t hear but are unbearable for squirrels to be around. The great thing about these is that you can set it and forget it. This means you won’t have to remember to move something around your yard every few days to keep the squirrels away.

Squirrels are afraid of owls because they are a natural predator. Owls are pretty much top of the bird food chain and will hunt and prey on small mammals like squirrels to eat. Naturally, this makes squirrels scared of owls.

You can use owl decoys to naturally deter squirrels for your yard. These can work for a few days at a time. You’ll need to have a strategy in place to keep the squirrel away for any length of time. Using owl decoy together with other deterrent methods can be effective against squirrels in the long term.

2 thoughts on “Are Squirrels Afraid Of Owls?”