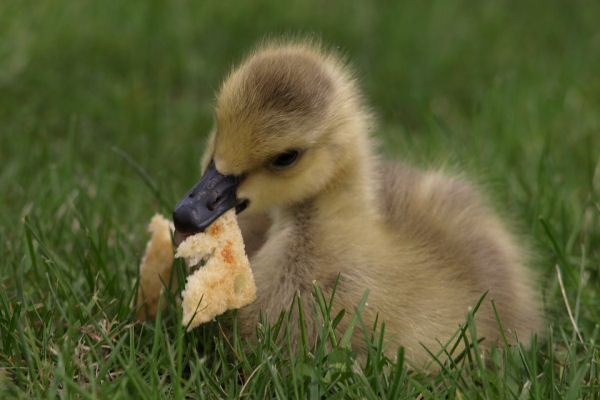 Feeding the ducks a loaf of bread at the park is a great way to enjoy nature. But you may be confused by information saying that bread is bad for ducks. So can you feed ducks bread?

Ducks can eat bread fed to them by humans. The problem is that too much bread can cause health problems for ducks. Bread is not a natural food source for ducks. Although bread is not immediately harmful to ducks it should not make up the majority of their diet.

If you want to know more about how bread can be harmful to ducks then keep reading. This guide will take you through all you need to know before you take your breadcrumbs down to the waterside.

Can you feed ducks bread?

Bread is edible for ducks, and they are able to digest bread products. That means if you feed the ducks bread, they won’t become instantly sick.

The problem is that bread is nutritionally poor for ducks. In other words, bread is like junk food for ducks. You can read more in my guide to what not to feed wild birds.

Although that may not seem like a big issue at first, you need to think of the bigger picture. It’s fine if the ducks were eating only bread from you every so often. Think of it like diet advice for us: a little bit of junk food in moderation.

Yet, you’re not the only person who goes to the water to feed the ducks. There are probably hundreds of people in your area who do the same thing. Over a short period of time, that’s a lot of bread that the ducks are eating.

That means depending on how often other people are feeding the ducks, their diet may be mostly made up of bread. Moderation is hard to judge when you don’t know how much they are getting from other people.

8 Reasons Why Bread Is Bad For Ducks

Ducks won’t protest to you feeding them bread. Yet bread isn’t a food that they would naturally forage for. That means we have to be responsible for not feeding wild ducks an unnatural diet. Let’s look at 8 reasons why feeding ducks bread is harmful in the long run.

Bread is a food that is high in calories with little nutritional value. That means ducks will eat an extremely high volume of it given the chance.

Like we’ve already discussed, bread is like junk for ducks. If we eat too much junk food then what happens? That’s right we start to become overweight.

That’s exactly what happens to ducks.

Being hand-fed a high-calorie food without having to forage for it themselves leads to overweight ducks.

When a duck becomes overweight this impacts other areas of its life. First, they may find it much harder to fly due to the extra weight.

Second, a duck that finds it harder to fly or waddle away, will also struggle to flee from predators. What’s worse is that the fatter ducks are more of a target as they’ll provide the predators with a tastier meal.

One of the most vital times for ducks is when they are ducklings. What they eat during these times will shape how they grow into an adult.

This starts as soon as they are growing in their eggshells. Female ducks who are eating a nutritionally poor diet at known to lay eggs with weaker shells, which makes the duckling vulnerable.

If the ducklings are fed nutritionally poor food, then this will impact their health as they grow.

Ducklings need a diet that is high in protein. The problem is that bread has no protein content.

When ducklings fill up on bread instead of their natural diet, they are at risk of developing angel wing.

This is a disease that affects the duck’s bones and causes deformities in their wings. The wing looks like it’s twisted awkwardly and doesn’t lay flat on its body. A duck affected by an angel wing cannot fly.

Adult ducks that have angel wings cannot be cured. A duckling may be cured of angel wing if caught early enough into their development.

This is even more significant as often duck feeding increases when ducklings are starting to forage themselves. Offering large, dry chunks of bread can also increase the risk of ducklings choking.

Offering bread to wild animals causes them to associate an area with a good food source. This means that ducks and other waterfowl will often flock to the area, as they know that they can be fed bread easily.

The issue with too many birds in one area is that they need to compete for a lot of other resources. All the species will be looking for nesting spaces to raise their babies. This often results in increased aggression for the parent bird to protect their young.

The availability of bread also gives the ducks false confidence to overproduce eggs. Once the bird species have their young, they then need to encourage them to forage for themselves. That means that there are even more mouths to feed, causing birds to become more territorial in the area.

Overcrowding in flocks also results in diseases being passed around quickly.

When ducks eat large amounts of bread they will poo a lot more. The excess of duck droppings can have a huge impact on a small water source.

The poo itself can be quite slippy and increase the risk of a fall for anyone walking near it. It can also be dangerous for pet dogs, especially those that like to eat anything they find on the ground!

The areas can become quite smell and just generally not a very nice place to relax and enjoy nature.

Too much duck poo in the water can reduce the water quality in the area. It may also cause the overgrowth of harmful algae. This impacts other animals that live in the areas and need clean water and oxygen to thrive. Animals such as fish, frogs, and crustaceans may lose their habitat.

The knock-on impact is that there is less food available for the ducks and other animals higher up the food chain.

Offering large amounts of bread to ducks means that there are often pieces of bread leftover. These soggy bits of bread are left on the ground or float to the bottom of the water.

The bread that isn’t eaten can increase the levels of the bacteria Clostridium botulinum. This bacteria is a major player in the spread of avian botulism. This is a disease that causes paralysis and can be fatal for ducks. If uncontrolled it’s been known to wipe out whole flocks.

Leftover bread parts near the waterside are a sure-fire way to attract pests such as rats, mice, and insects to the area.

These pest animals can cause huge risks to ducks by carrying various diseases which are harmful to their health.

Uneaten bread pieces will attract larger prey animals which will sniff it out. This includes raccoons, foxes, and weasels. These are not animals that they want to have with young ducklings or eggs close by.

Once these animals realize that the ducklings as near they will likely stay awaiting the opportunity to kill one that is lost or wandering.

The more that humans offer up food in front of the ducks, the more they become reliant on it. That’s because the ducks start to lose their natural foraging instincts. They may then start to approach humans for food and become aggressive if not given any.

The ducks may also try to eat garbage they find in trash cans in the surrounding area. This exposes them to more foodstuff which is bad for their health.

When ducks expect food to be available from humans, they then suffer when that food is taken away.

Starvation can be a big problem for ducks who become over-reliant on food. This happened in large numbers during the lockdowns of 2020 when there were fewer people around.

The ducks may not be able to naturally find the same volume of food that humans give them.

What to Feed Ducks

There remains a huge debate whether it is even safe to feed wild ducks or not. There is an argument that we should leave them to forage in their natural area to avoid any risk. Ducks are able to forage for themselves without human handouts.

If you still want to give the ducks an occasional treat, then you know to stay away from the bread. But learning what other healthy alternative you can offer is good to know.

Some safe alternatives to feed ducks are:

Try to stick to foods as close to a ducks’ natural diet as possible. Offer food only occasionally and only small amounts at a time. As although you are offering nutritionally good food, you’ll still cause the issues that arise with feeding ducks.

Always stick to any rules of your state or park area that you are in. Otherwise, you may find yourself getting in trouble with the law or being fined.

Ducks can eat bread, but it’s not recommended that they eat it in large volumes. The problem is that we don’t know how much bread the ducks have eaten recently.

There are a lot of issues associated with feeding bread to the ducks. This includes obesity, deformities, disease, and environmental pollution. There is an argument that you shouldn’t feed wild ducks. Although if you can give it up as a pastime then you should consider using small amounts of safe foods to feed the ducks instead of bread.