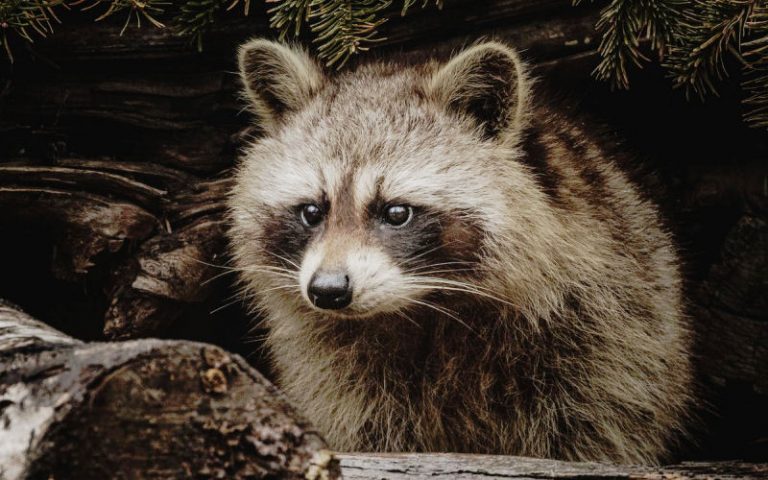 Raccoons are clever creatures and will give you hours of entertainment with their antics. You may have noticed that it’s hard to tell how old an adult raccoon is. That’s probably left you wondering how long do raccoons live?

The average life expectancy of a wild raccoon is 2-3 years old. Around half of all baby raccoons will not survive the first year of life. As adults raccoons have a 70-90% chance of survival. Several factors affect the lifespan of a wild raccoon including its habitat, diet, health, and local ecosystem.

If you have raccoons that regularly visit your yard, you may want to know how long they will survive. This guide will tell you all you need to know about what impacts a raccoon’s life. You’ll also find advice about living in harmony with raccoons and reducing the risk you may present to them.

How Long Do Wild Racoons Live?

Wild raccoons can live up to 15 years old, yet most will die at around 2-3 years old. Of course, there will always be outliers who defy the odds and can survive longer.

The reason the average age for a raccoon to die is so low is that 50% of raccoons die under the age of 1. The main cause of death in young raccoons is predators and disease.

Once a raccoon reaches adulthood they have a much better chance of survival. The average age of raccoons that survive past the age of one is 5-6 years old.

Adult raccoons need to become resilient against many factors that will impact their survival rates. Let’s take a look at what things affect a raccoon’s lifespan.

Why do raccoons have such a short lifespan?

Food availability is a major threat to raccoon survival. A steady supply of food is essential for raccoons to meet their energy requirements to mate, carry babies and nurse them too.

Raccoons have adapted over the years to low food supplies by being opportunistic omnivores. Raccoons will eat pretty much anything they can including meat, vegetation, fish, eggs, nuts grains, and trash.

Without a steady food supply, a raccoon will starve to death. This is common amongst young raccoons who are still reliant on their mother to forage for food. If the mother is killed then that means certain death for the kits who will starve.

Raccoons need to eat more than they need during the summer months. This is to help them grow a thick coat and layers of fat to help them survive the winter. Food can be harder to find in poor weather conditions or when the ground is frozen over.

Often raccoons will raid urban gardens for easy food sources such as trashcans, pet bowls, or bird feeders. A diet that relies heavily on these sources is likely to cause nutritional deficiencies which makes a raccoon vulnerable in the wild.

Raccoons are prey for a lot of other animals higher up the food chain.

Most raccoons are eaten when they are young and immature. This means they are smaller and don’t yet have the skills to fight back or escape. Some predators will follow the female raccoons and attack the kits in their den when the mother leaves to forage.

Domestic dogs are also a big risk to wild raccoons. A dog can easily catch and kill a raccoon that is foraging in your yard.

Adult Raccoons are aggressive and can often hold their own during a predator attack. Baby raccoons will be taken out to forage at around 8 weeks old. This helps to reduce their time alone in the den which makes them vulnerable to predators.

Human trapping and hunting also pose a large threat to a raccoon’s survival. Humans kill hundreds of thousands of raccoons in the USA each year. Most of these are killed for sport, meat, and fur.

Raccoons are also killed due to their pest status, killing crops and poultry, as well as spreading disease.

A raccoon’s health has a large impact on their survival rates. Disease and parasites are one of the main killers amongst wild raccoons.

These diseases are just a few of the most common ones raccoons will contract. There are lots of diseases that can affect raccoons especially if they are young, injured, or starving.

Most of these diseases will attack the raccoon’s internal organs and cause multiple organ failures. Until they die the raccoon will become more unwell and be unable to find food or maintain their safety.

The habitat in which a raccoon lives can make them at greater risk of injuries. An injured raccoon is vulnerable to predators, unable to search for food, and can contract an infection.

Raccoons that live near urban areas are at the highest risk of injury due to their interactions with humans. Common injuries that a raccoon can sustain are ones when they trespass on land or in gardens. This may be caused by dogs, gunshots, or poison.

Raccoons are also prone to injury from car collisions. Most raccoons will die immediately after being hit by a vehicle. Some may suffer broken bones, significant internal injuries, or large open wounds.

Devices used by hunters or trappers can also result in raccoons sustaining a life-threatening injury. If the raccoon does die immediately it’s likely they die through exposure to predators or from starvation.

Raccoons will sustain injuries when escaping predators or fighting to defend their territory. Relocating a trapped raccoon most often results in the death of the raccoon from aggressive males in the area.

Raccoons will often spend time in climates that have harsh winter weather. A raccoon won’t hibernate in the winter. Raccoons need to make special adaptations to survive.

Winter brings with it extreme weather conditions such as snow and ice. That means limited food supplies and dangerously low temperatures.

When the temperature dip below 59 °F (15 °C) then raccoons are able to go into a state of torpor. This helps raccoons to slow their metabolism so they can rest and go for long periods without eating.

It’s important that raccoons find a safe place to shelter as they may be exposed to harsh winter conditions. Often raccoons will find a den and settle down with a few other raccoons to share their body heat. Without a good sheltering space raccoons will likely freeze to death.

If a raccoon has not stored enough fat during the summer and fall seasons they will need to brave the winter conditions to find food. This will often result in death by starvation, exhaustion, or hypothermia.

Wild raccoons don’t have a long lifespan. This is mostly due to diseases they contract in the wild but also a good part is due to human influences. There are a few ways that you can live peacefully with the local raccoons, minimize your impact on them and help them to survive a little bit longer.

Let’s look a 5 ways you can help wild raccoons to live longer.

You won’t be able to stop wildlife predators from killing raccoons. Yet you can reduce the impact that your dog may present to them. Dogs can cause raccoons injuries by attacking them when they trespass in your yard.

Keeping your dogs indoors during times that raccoons may be foraging will help to prevent either animal from getting injured. It’s in your dog’s best interest to stop them from attacking raccoons. That’s because raccoons can pass on diseases to dogs which will make them ill.

Raccoons will use your yard to forage for food. It’s really important that you don’t encourage them into your yard by offering them food.

Once a raccoon realizes your yard is an easy food source, they’ll carry on visiting. For raccoons, this may mean they end up with nutritional deficiencies from eating food not intended for them. For humans, it means raccoons associate them with food and may become aggressive if they don’t get any.

Raccoons are a pest and present a risk to your health, so you don’t want them hanging around your yard.

If you kill or trap one raccoon that doesn’t solve the problem. That one will be gone but if your yard remains attractive to raccoons another one will just take its place.

You should never trap and relocate a raccoon as it’s an almost certain death sentence for them. Around 50% of relocated raccoons die within the first two months.

A relocated raccoon will have to venture into new territory and most likely be attacked by any existing raccoons or predators. They’ll also need to find food supplies in an area that is unfamiliar to them.

A trapped raccoon may also be a female that has a litter of kits depending on her. If you remove the mother then the babies will be left to starve to death or become easy prey for nearby predators.

If you have found orphaned, sick, or injured raccoons then you should call a wildlife rehabilitator for advice on what to do.

These guys are specialists in dealing with wildlife that needs help. They will be able to collect and care for the raccoon appropriately. Depending on the issue they may be able to nurse the raccoon back to good health and then rerelease them into the wild.

Never try to trap a wild raccoon and take it to a rehabber, contact them and tell them the location of the animal. This keeps you safe from any risk that a stressed raccoon may present to you.

To find a wildlife rehabilitator in your area check out this list from the humane society.

How long do raccoons live in captivity?

Raccoons in captivity can live for up to 20 years. The oldest known captive raccoon was 22 years old. Captive raccoons live longer as they do not need to deal with the stresses that wild raccoons do. This greatly improves their chances of survival.

Raccoons in captivity are protected from predators, have a steady food supply, and can be treated for any diseases they may contract. The main reason a captive raccoon will die is through ill health or from old age.

The average age of a raccoon in the wild is 2-3 years old. This number is low as half of all raccoons will die before they reach one. Once a raccoon survives until adulthood it will usually live until 5-6 years old.

The longevity of a raccoon will depend on its lifestyle. This includes food availability, habitats, health, and predators impacting their survival rates.

Humans can have a large part to play in a raccoon’s ability to survive longer. There are things you can do to reduce your impact on the local raccoon population.