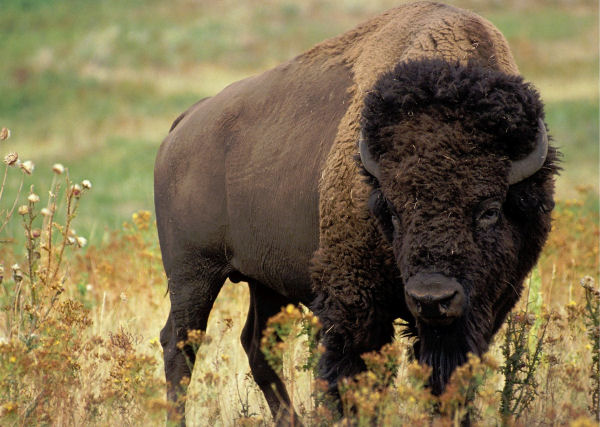 Bison are the largest mammals in North America. So surely an animal that size needs a lot of food to keep them going. But what do bison eat in the wild?

Bison are herbivores that mainly eat grasses and plant matter. The bulk of their diet is made up of graze vegetation. They will adjust their diet to eat what is available to them seasonally. Bison are very selective about the types of grass and plants that they eat.

It’s quite surprising to learn that an animal as large as a bison is a picky eater. After all, you’d think they would need to eat everything in sight to get to the size they do. Although their diet is quite specialized they do eat quite a variety of foods.

This guide will take you through everything you want to know about the bison’s eating habits. You’ll learn all about the foods they eat and some of their eating habits too.

What do Bison eat in the wild?

Now, you may be confused about how an animal so large can survive mainly on meadow and prairie grasses. The reason is that bison continuously eat for 9-11 hours a day. On average they consume around 24lbs of food each day. But, males can eat up to 70lbs (32kg) per day in the summer.

After eating that amount of food, it takes the bison about 80 hours to fully digest it all. This extremely slow digestion allows the bison to extract as many nutrients as possible from the grasses.

Bison are not very selective about the type of grasses they eat, although they often have preferences. They will often eat in a patchwork fashion to eat grasses before any other ground vegetation.

Bison also really enjoy eating burnt grass after a fire, due to its high nitrogen content. This allows the land to recover by clearing the way for fresh vegetation after such devastation.

Grasses that bison enjoy eating are:

Bison are also known to eat leafy vegetation known as forbs. This makes up around 5% of their diet.

Forbs are the leafy green vegetation that you see grow sporadically amongst the grasses. You’ll think of forbs as weeds or wildflowers.

Bison don’t eat forbs as much as grasses due to their tendency to die out when overgrazed. Grasses withstand the high volume grazing that bison need to do each day. Yet, they will eat the forbs to make way for grasses to take over.

It’s also common for bison to leave large patches of forbs in favor of grasses. This makes it easier for other animals such as deer or rabbits to find food to eat.

Bison will eat most of their forb consumption in summer when volumes are high. They also eat similar amounts in winter when there is less grass to go around.

You’ll be more familiar with browse as woody-stemmed plants or trees. Bison will eat much more of this type of vegetation during the autumn and winter months when large amounts of grasses are harder to find.

Bison are known to peel off thin layers of bark from trees or woody stems.

Common browse that bison eat are:

Although trees provide nutrients there is also another reason bison strip them. This actually kills the trees off. The reason they do this is to prevent large trees from flourishing. Too many large trees mean less sunlight and nutrients for grasses to grow.

Bison will find fruits as they forage near wooded areas or shrubbery.

Fruit that bison enjoy eating are:

As herbivores bison are also likely to eat vegetables if they find them whilst foraging. They won’t specifically go out of their way to find vegetables to eat.

Bison will more likely eat the green vegetation above ground on root vegetables. This includes veggies such as carrots, beets, and leafy greens.

A few of the food that bison will eat whilst foraging are fungi, moss, ferns, and nuts.

Mushrooms are usually plentiful in the autumn months. They will provide bison with nutrients and salts which keep them healthy. Bison will often find these when foraging around trees or stripping the bark.

Another food found near or around trees is nuts. These give bison a good source of fats for a vital energy boost in winter.

Eating tree seeds and nuts is another great way for bison to keep the tree population down. Too many trees mean less grass for bison, so it’s in their best interest to prevent overgrowth.

On rare occasions when grasses are harder to find during colder seasons, the bison will turn to grains as an alternative.

Some grains that bison eat are:

This is a short-term food solution as too many grains can cause the bison’s digestive upset. This is due to the grain causing an overgrowth of the stomach bacteria that break down their food.

These grains can help wild bison to bulk up quickly for the winter. For this reason, bison ranchers will often bulk up their livestock with grains before going to market.

Baby bison (calves) will drink their mother’s breastmilk for the first year of life. Unlike other bovine animals, the bison breastmilk is more of a thick colostrum than a cow’s milk. The reason is that it’s high in fats to make the baby bison grow very quickly.

Bison calves will drink only milk for the first 6 months. They will then start to wean onto the usual grasses and forbs that the adult bison eat.

Surprisingly large bison cows only have enough breastmilk for one calf at a time. That means if they have more than one calf, they will have to eventually abandon one of them to make sure at least one survives.

Abandoned baby bison don’t survive long in the wild. As other females also have poor milk supplies they don’t get adopted by another herd. Sadly they will starve to death or become prey for a nearby predator.

Bison do not eat meat as they are true herbivores. They will only eat various plants and vegetation as part of their diet. The bulk of the bison’s diet is made up of grasses.

Bison may accidentally consume small insects when they are foraging in the grasses and plants. Yet, animal matter is not part of the bison diet, as they are not designed to digest high protein foods.

What do bison eat in winter?

Bison will stick to their usual diet of grasses even in the wintertime. Although it’s a lot harder for them to eat the same large volumes they do in the warmer months.

Bison are known to push heavy snowfall out of the way with their head to find grasses below. They can dig as deep as 4 feet of snow. If they can’t find the grass, they will turn to browse vegetation or grains.

The bison will overeat in the summer so they can put on large fat stores. This helps them survive the harsh winter months and eat smaller volumes of food when less is available.

Many years ago bison would migrate over hundreds of miles during winter to seek food. Yet modern-day bison are confined to only a few national parks across the USA and Canada. They still migrate to seek better food sources but the most is around a 70-mile range.

Wild bison are herbivores that primarily eat grass. They also have a few other food sources that use to supplement their diet. Depending on the season they will also eat weeds, wildflowers, woody vegetation, fruits, fungi, and grains.

Bison eat large volumes of food each day, yet, they take over 3 days to fully digest it all. This helps them to eat lots of low-quality vegetation whilst remaining healthy.

Baby bison will be nursed for up to a year, however, milk supplies are limited. This often means babies need to be abandoned to ensure the survival of one.

These are the adaptations the bison have made to their diet to survive as best as they can in the wild.