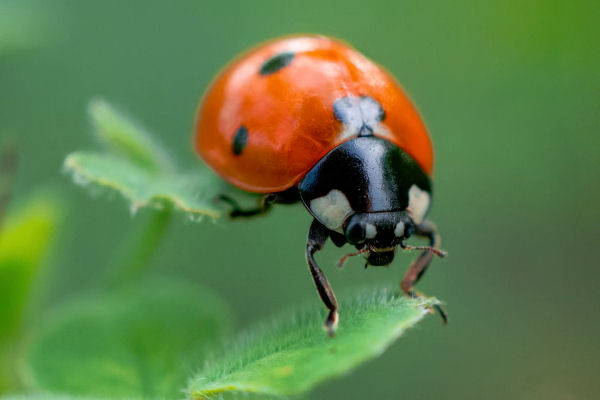 Ladybugs are tiny, popular insects that often remind us of warm and bright summer months. You’re maybe wondering if the rest of the world has ladybugs too. So, where do ladybugs live?

Ladybugs live in gardens, grasslands, woodlands, riversides, and urban and rural areas worldwide. The only places where ladybugs don’t live are extreme desert and arctic climates. Ladybugs are generally found on leaves and green vegetation as this provides them with shelter, water, and food.

If you want to know more about where ladybugs live, keep reading. There are over 5000 ladybug species are adaptable to live in such a huge variety of habitats.

What is a Ladybugs Habitat?

Ladybugs live all over the world and are highly adaptable to most climates. Although ladybugs often go by different names in different countries. They are also known as ladybirds or lady beetles.

Regardless, it’s all describing the same beetle species from the Coccinellidae family.

Ladybugs need a habitat that suits their daily needs. Knowing what a ladybug requires for survival will help you understand why they choose their habitats.

Ladybugs are insects and, therefore, easy prey for many larger animals such as birds. This means they need a habitat that can provide them with cover to offer physical protection.

Ladybugs don’t live in nests or build any homes. They need to use the environment around them to create cover.

Ladybugs roam on plants, vegetation, and trees. You’ll also find them under logs and in rock crevices. These places offer physical cover and provide shade in low-light conditions.

Ladybugs will often use the underside of leaves to lay their eggs or mature during their early life cycle. During this time, the ladybugs are immobile, and their survival is under threat. This placement keeps them out of the eyesight of nearby predators.

Ladybugs need a good food source to survive. A water source isn’t as important. Ladybugs can get a lot of their water from their food. However, they do much better in habitats with fresh water available.

Ladybugs have a voracious appetite and eat a lot of small insects, mainly aphids. They eat vegetation and sweet foods such as nectar and secretions. All these foods rely on a regular water source.

Ladybugs are generally solitary insects. They will only interact with other ladybugs during the breeding season around May. The females will often lay the eggs in groups of around 20. This means that ladybug larvae will usually hatch together.

Ladybugs can also huddle together in large swarms, which people can see as an infestation. This is aggregation and usually happens from November to February.

This behavior is to share body heat between the mass to help them survive. It also provides a level of protection from safety in numbers. A predator may attack one tiny ladybug, but a swarm of red with black spots is an ample warning in nature.

Where do ladybugs live in the world?

Ladybugs are native all over the world. This includes The Americas, Europe, Asia, Africa, and Australasia.

Although with so many species, they don’t all take on the red and black spotted shell that we associate with ladybugs.

Let’s look at what ladybugs exist in each part of the world.

There are around 500 subspecies of ladybugs that can be found in North and South America. Some species are non-native. This means they have been introduced from other countries.

The most common ladybugs native to North America are:

Ladybugs are found over the whole of mainland USA, South America, and southern and central Canada and Alaska. You can even find a ladybug native to Hawaii aptly named the Hawaiian ladybug.

Ladybugs are not found in the arctic areas of Canada or Alaska due to the freezing climate.

The number of these native ladybugs is slowly declining. This is due to introduced ladybugs such as the Asian lady beetle and the seven spotted ladybug.

Ladybugs are well-loved in the USA. They are the state insect for Delaware, Massachusetts, New York, New Hampshire, Ohio, and Tennessee.

Ladybugs live throughout Europe, although they are more commonly known as ladybirds. You’ll find them in mainland Europe, Great Britain, Scandinavia, and the Mediterranean.

Ladybugs don’t live in the northernmost tip of Europe, including northern Scandinavia. The climate here is subarctic and too cold for the ladybugs to survive.

The Asian beetle was introduced to areas of Europe in the 1990s to control aphids. Yet they have become distinctly invasive. The impact is a decline in the number of the native seven spotted ladybugs.

Ladybugs live throughout Asia. The only place they are not found is in the uppermost northern tips of Russia due to the arctic conditions.

The most common ladybug in Asia is known as the Asian lady beetle. It’s native to China, Russia, Korea, and Japan. The harlequin ladybug is another name for the species.

This ladybug species gets a bad reputation as it’s a highly invasive species in the rest of the world. It has been introduced such as Europe, North American, and South America. They have seen a massive decline in the native ladybug species due to the Asian ladybug.

There are over ten different morphs of the Asian lady beetle. But, they have orange and black coloring rather than the typical red and black. They are also larger than most ladybug species and gather in large swarms.

Asian lady beetles are much more problematic for homeowners as they tend to overwinter in people’s homes. This can be a problem when large groups leave yellow stains over walls and are generally a nuisance.

In some areas of the USA, the Asian beetle is starting to become known as the Halloween beetle. That’s due to its tendency to invade homes at the end of October.

Ladybugs live in most areas of Africa, with a higher population at the coasts and near the south. These areas have better access to freshwater sources and vegetation for the ladybug to thrive.

Some species of ladybugs in Africa include:

In this range, ladybugs often have a different appearance. You will see varying colors of yellows, oranges, black and brown shells. Their marks can often be more striped than spotted.

Like other areas around the world, the Asian ladybug is becoming more and more common.

Ladybugs live in Australia and New Zealand. Like other areas of the world, Australia is host to over 500 species of ladybugs.

Australia has some fascinating species of ladybug, including one which eats fungi. Another great subspecies is the steel blue ladybug. This ladybug has a gorgeous oil-slick appearance. It has also been introduced into New Zealand.

The Asian ladybug is not as widely spread in Australia as in other world areas. That’s surprising since Asia is so close. Australia is a country that has a strict biodiversity policy.

They recognize the impact of introducing invasive species. They try to reduce the number of Asian lady beetles as much as possible to protect their native ladybug species.

What Climate Do Ladybugs live in?

Ladybugs mainly live in temperate climates yet, have adapted to survive in most world areas.

The only areas where ladybugs will not survive are extreme arid (desert) conditions or arctic climates. These areas are just too harsh for insects. Plant species need to be able to thrive and provide a food source for the ladybugs.

Ladybugs have a preference for humid climates. This is because water is essential for healthy plant growth. This attracts insects which are the primary food source for ladybugs.

The introduction of non-native species of ladybugs around the world demonstrates their adaptability.

Where do ladybugs live in winter?

Ladybugs hibernate in winter to survive the cold months like all other insects. They will go into this state known as diapause in the fall.

They will find an area with a lot of shelter and cover. This keeps them hidden from predators as they remain immobile. Familiar places they seek refuge in winter are in rock crevices, under leaf litter, or bark and crevices of trees.

Ladybugs choose a place to hunker down for a few months. Usually, they will spend around six months hibernating through fall and winter.

Most ladybug species will not hibernate in human homes. Yet the Asian lady beetle is the one exception that will invade homes to hibernate. Unfortunately, they will often gather in large swarms in homes.

Ladybugs are highly adaptive insects that survive in most areas of the world. With over 5000 species, there are ladybugs native to North America, South America, Europe, Africa, Asia, and Australasia.

Most ladybugs are solitary and live alone. The Asian lady beetle is problematic in non-native areas. These invade homes in swarms to find heat. Plus, they’re incredibly invasive outside their range in Asia. This is impacting the number of other ladybug species all over the world.