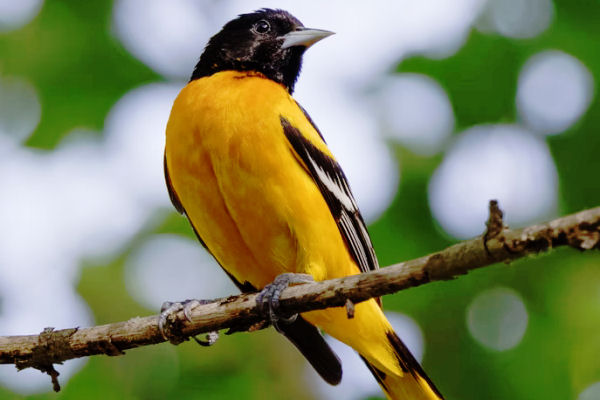 If you’ve been enjoying watching the orioles in your backyard, you may have wondered where they have suddenly disappeared to. So do orioles migrate?

Some species of oriole do migrate seasonally. The North American species such as the Baltimore orioles, Bullock’s orioles, orchard oriole, and Scott’s oriole migrate to central and South America in early fall. Orioles migrate for warmer weather conditions and better foods supplies to help them to survive through winter. They return to North America in early spring to breed.

Why Do Orioles Migrate?

Bird migration is when birds will travel from one part of the world to stay in another. They’ll do this as they are following the climate and resources available to them in the area. More food and ideal weather conditions help them to survive longer. Let’s look closely at these two factors.

The reason only some species of orioles migrate is that they live in areas where climate changes with the seasons. In North America, winter weather conditions are harsh for wild birds. They need to survive low temperatures, frozen environments, and snowstorms. This is why it’s mostly only North American oriole species that migrate.

The South American oriole species experience a warm climate year-round. They will have hotter periods of the year, yet orioles are a neotropical species so they are adapted to survive tropical weather conditions. Winter in South America has wet conditions rather than freezing.

Another reason why orioles migrate is food availability. There are three main sources of food that oriole eat:

The problem is that all three of these food sources rely on warm weather conditions. Fruit, flowers, and insects are plentiful in North America in the spring and summer. When the winter months come around all the fruit has fallen, flowers are dead and the insects have gone dormant.

These conditions make it much harder for the oriole to find consistent food sources in North America.

In South America, fruits, flowers, and insects are available all year round, even in their winter months.

When Do orioles Migrate?

Orioles have two peak periods of migration in the spring and autumn. Let’s look at what happens each season.

Spring is a peak time for Orioles migrating north. That means they leave their overwintering spots in south and Central America and slowly move up throughout North America.

For orioles, the summer months are spent building nests, mating, and raising their chicks. By June most oriole have eggs or chicks to care for.

Some Baltimore Orioles may even start to migrate south from the beginning of July.

Oriole Migration down south starts in late August and September. They will leave their breeding grounds and make the long journey to their overwintering spots. The orioles can only do this once their young chicks have developed their flight feathers and can join the flock.

Orioles are molt migrators which means they shed their flight feathers and grow new ones before migrating. Although the Bullocks oriole is known to take pit stops whilst migrating south to do this.

Most Orioles will have reached their overwintering ground by October, you won’t see many migrating orioles after this time.

Most migrating orioles have arrived in central or southern America by the winter months. There will be some straggling oriole who can take up until November to December to reach the spot thieve chosen to overwinter.

Some Orioles may choose to overwinter in your area, so you may get to see them throughout the winter.

The oriole will stay throughout the winter months. Come February, some will start migrating north. Although their journey keeps them in Central America until early spring.

How do Orioles Migrate?

Orioles migrate by flying together in large flocks. This gives them safety in numbers from predators when they are covering new and unknown territories. Orioles usually stay paired with their partner and will fly together, rather than the males flying ahead.

Migration will usually take place overnight. This gives birds further protection from large bird predators. Night migration also helps them navigate using the stars and the air is much calmer.

During the day the Oriole will stop to rest and forage for food to give them the energy to fly. They won’t stick around for too long as they have a long journey ahead of them. Although they may need to stick around if there are bad weather conditions stopping them from flying safely.

Where do orioles migrate?

The migration range and locations of the oriole will depend on the species. Keep reading to find out where each specific oriole species travels during migrations.

Some oriole species can also migrate longitudinally from east to western coastal states for winter.

North American orioles are usually long-distance migrators. This means they will fly thousands of miles during migration seasons.

This is often seen in some of the hotter states such as coastal and Baja California or Florida.

There are 33 species of new world orioles found throughout the Americas. Let’s take a look at the migration behaviors of some of the most common species.

Baltimore Orioles are the most common type seen in Canada and the USA.

These species are seen in mostly south Canada as well as central and eastern US states during mid-April through to August.

Baltimore Orioles will overwinter mostly in central and southern America. However, they will also stay in Florida. Some Baltimore orioles may even migrate longitudinally. This is from east to west to overwinter in coastal California. They will stay here from September to March.

The Bullocks Oriole is the second most common type seen in Canada and the USA.

Bullock Orioles are seen in mostly southwest Canada as well as central and western US states during mid-April through to August.

Bullock orioles will overwinter mostly in Central America yet some will stay in south coastal California. They will stay here until March when they will start to move back up through the southwestern states.

The orchard orioles are seen in mostly southeast Canada as well as central and eastern US states from mid-April through to August.

Orchard orioles will overwinter mostly in central and South America. Yet some will migrate to coastal California to overwinter. They will stay here until March when they will start to move back up north.

The Scott’s Oriole is found in some southwestern states of the USA from March to August. They are also known to be a permanent resident in Baja California and Mexico.

Scott’s orioles mainly live in states with a warm climate. Due to this they are medium distance migrators often moving a few hundred miles to Central America.  Migrating Scott’s orioles overwinter until early March when they start to travel back to their breeding grounds.

The spot-breasted oriole is a permanent resident of the Central American specific coast. A small number of the Spot-breasted orioles can also be found in southern Florida after it was accidentally introduced to the area.

The Altamira oriole is a permanent resident of Central America. This species can be seen along the pacific south coast of Mexico, the gulf coast, and Belize.

The hooded oriole is mainly a permanent resident of Baja California and the Gulf of Mexico. It can also be seen migrating to breeding grounds in the USA from March through mid-September. The hooded oriole breeds in southwestern states of the USA including California, Arizona, and Texas.

They will then migrate back to Mexico for winter from September through to March.

The Audubon oriole is a permanent resident of the Central American Pacific coast. It can also be found year-round in the Gulf of Mexico, extending up to southwest Texas.

The Streak-Backed Oriole is a permanent resident of northwestern coastal areas of Central America. Although, there have been rare sightings of this species in some southwestern states such as California and Arizona.

Can orioles stay year round?

Most oriole species that you’ll see in the USA are migratory. But, there are some areas of the USA that have orioles as permanent residents. This includes southern Florida, southern California, and southwest Texas. These states have much milder winters and don’t experience the harsh conditions that more northern states do.

Although there may be some orioles that break the mold and will overwinter in some states rather than migrating. They are able to do this if the winter conditions are mild and there is a good food supply for them.

Some orioles can be seen as far north as New Jersey during the winter. These types of sightings are rare but are becoming more common.

Usually, orioles seen in late winter are flock stragglers. This happens with any migrating bird species.

If you see orioles overwintering, try to offer them food and a fresh water source to help them survive. Fruit, berries, and suet are ideal for them at this time of year.

Most North American orioles will migrate to a warmer climate in the winter, and return from breeding in the spring and summer. The most common species travel from North America to South America. The orioles follow this pattern each year of their lives.

Some orioles travel much longer distances than others. Although some species don’t migrate at all and will be found all year round in Central America and southern states. Each species has its own migration timing, routines, overwintering, and breeding grounds.

The migrating orioles generally arrive in the USA spring and leave early fall. This is the time you’ll see them most in your yard. If you’re lucky you may even get some stragglers who choose to overwinter in your yard.