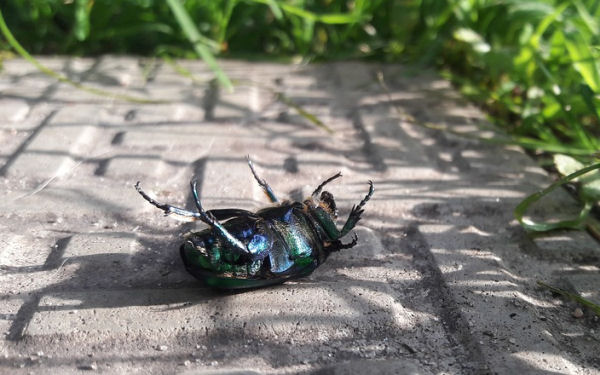 You may be familiar with June bugs in the summer. Just like their name suggests they arrive in swarms in June. But how long do June bugs live?

June bugs live for around 2-4 years. Most of the June bugs’ life is spent as a grub underground. June bugs remain as grubs for around 1-3 years. Once they emerge as adults, June bugs will live for less than one year. The lifespan of a June bug will depend on their access to food and the environment they live in.

June bugs can be a nuisance to have around your yard. Not only are they annoying as they fly around, but they also attract large pest animals to your yard.

Learning about the June bug life cycle will help you understand how long they live and the factors that affect this.

This guide will take you through everything you want to know about the June bug’s lifespan.

How long do June bugs live?

It’s a common misconception that June bugs live for less than a year.

The reason for this misinformation is that they are only considering the time that June bugs spend as an adult. That’s the time that you see the annoying bugs flying all around in the warm months.

The reality is that there are three stages of the June bug’s life before it reaches adulthood. And as we’ve already discussed, the June bugs spend much more of their life in these three stages than they do as an adult.

You’re usually not aware of how many June bugs are around, as they spend the majority of their life underground. Some June bugs will live in the soil for up to 3 years before they emerge as an adult.

The lifespan of the June bug will depend on the many different conditions they experience. This includes food availability, predators, and human interference.

There are over 900 species of June bug (Phyllophaga) so they all face slightly different life circumstances.

Female June bugs lay clutches of around 50-200 eggs at a time. They lay their eggs in the soil of grassy areas such as lawns. The eggs are laid around 2-5 inches deep in the soil. Laying eggs in the soil keeps the eggs well-hidden and protected from predators.

The summer months are when the June bugs lay their eggs, and they will hatch around 2-4 weeks later. Laying eggs at this time of year ensures that they have a lot of food available to them as soon as they hatch.

Once the eggs hatch they emerge as larvae or what you may know as a grub. They are soft and will grow to be around 1-2 inchs long.

June bug larvae are voracious eaters and will eat as much as they can to grow quickly. The larvae feed on mainly plant roots and will eat most organic material in their path.

The grubs will move closer to the soil surface depending on the season. Summer provides them with lots of fresh plant material to feed on. As winter comes around they move further down into the soil.

The length of time the June bugs stay in the larva stage will depend on the subspecies. Some larvae will stay underground for one year and others for up to three years.

The adult June bugs do not return to care for their offspring. This means they have to fend for themselves for the moment they hatch. So finding food and protecting themselves from predators will come from their natural instincts.

Once the grubs are large enough they will start the pupa stage of their life cycle. This is the process of turning into adult June bugs.

During this stage, the June bug stays underground whilst it undertakes lots of physical changes. The June bug will create a cocoon-like structure and stay in the same spot during this time. This makes the pupae vulnerable to parasitic predators as they are immobile.

This stage of the June bugs life cycle takes around 3 weeks.

Once the pupae are formed, the adult June bugs will emerge. Yet they stay beneath the soil to overwinter.

Once winter is over the fully formed adult June bugs emerge in May to June. Their purpose is to find other June bugs to mate with and lay eggs in the soil.

As the June bugs emerge they are extremely vulnerable as they are unfamiliar with the dangers that await them outside the soil.

For some June bug species, the time they spend above the soil will only last two months and others six months. The adult period only lasts one year in total.

How do June bugs die?

There are a few conditions in the June bug’s environment that will impact their ability to survive. Let’s look at common ways June bugs die.

June bugs need a lot of food to survive. The larvae stage is a time when they need a constant food supply to survive.

The June bugs are herbivores and their diet is made up of mainly plants and foliage. The larvae, they will feed on the plant’s roots and organic material in the soil.

The problem with relying on vegetation is that it is only available in large volumes in the warmer months of the year. That means the June bugs have a short period of time to eat a lot.

In the colder months, the June bugs will lay dormant to survive.

It can take a long time for some June bugs to get enough food to be large enough to form as an adult. For some species, they remain as grubs for up to 4 years.

Without a consistent food supply, the June bugs will undergo a period of stress. This can impact their growth and may even result in death. Lack of food impacts the number of adult June bugs that emerge to mate.

June bugs are a vital food source for a lot of other animals higher up the food chain. Predators are one of the biggest threats to June bug survival.

June bugs are most vulnerable to predators when they are underground. Although the soil provides some protection from some predators, they are not safe from them all.

Predators such as skunks and raccoons will dig into the soil to find lots of big juicy grubs to feast on. The grubs don’t stand a chance as they are too slow at moving and can’t yet fly. The egg and pupa stages are completely immobile.

Adult June bugs at least have the advantage of being able to fly away to protect themselves. The problem is that adult June bugs are not great at flying at all.  This is the reason they appear to bumble around completely uncoordinated.

Yet, this is a behavior that can work in their favor. It makes them unpredictable and may help them by confusing any predators.

The general health of a June bug will have a big impact on how long they live. June bugs don’t carry diseases that they can pass on to other bugs or humans. However, parasites have a massive impact on their health.

These insects will often infect the June bug grubs by laying their eggs inside the grubs. The June bugs will then serve as a host or a food source to incubate the eggs, then likely end as a food source once they hatch.

As insects, June bugs are extremely susceptible to life-threatening injury. An injured June bug is usually unable to flee from predators or seek safety and will likely be eaten quickly.

Humans also cause a lot of injury to June bugs. The use of pesticides is often fatal for June bugs. If the June bugs ingest any of the chemicals from insecticides, they will die from poisoning.

Gardeners will often use insecticides on their plants to keep other more destructive bugs away. Yet they will also use natural insecticides such as biological nematodes to attack the June bug grubs in the soil.

You can check out my guide on how to keep June bugs away by using these methods.

Other common injuries are often caused by devices used to trap or kill any bugs. Sticky tapes and glue will often catch the June bugs and leave them to slowly die.

Zapper lights (like these) are a common way that June bugs die. That’s because June bugs are attracted to bright lights and will often die from light exposure. This is why you’ll commonly see a lot of June bugs dead around a light source.

June bugs can also easily cause themselves an injury due to their haphazard flying. If they lose a wing, it will affect their ability to fly and flee danger.

Adult June bugs have the purpose to mate and then die off. So once they achieve this they will naturally die off once they have laid their eggs.

This is a natural part of the June bugs life cycle and should be expected each year. They have laid their eggs which will replace the large numbers that will die off. This means the species will continue to survive.

Usually, a June bug at the end of its life cycle will have a failing nervous system. Once this is too affected the June bug will no longer function and will die.

Do June bugs have a purpose?

Having read the life cycle of a June bug, it may seem pointless for them just to live underground, mate, and repeat the cycle. They are also a huge nuisance to gardeners and their grubs can destroy large crops for farmers.

So it can be difficult to see how they are of any benefit.

June bugs do play an important role in their natural ecosystem. Not only do they provide a rich food source for lots of animals, but they enrich the soil with lots of organic nutrients.

Without a huge supply of June bugs to go around, there would be a large protein deficiency for various mammals, birds, and other large insects. These animals rely on June bugs as an essential part of their diet to remain healthy.

Adult June bugs are nocturnal insects that are not suited to living indoors in a human environment.

The reality is that most June bugs will likely die within a few days of living in a human home. The main reason is overexposure to light. This is known to kill June bugs quickly.

Unless the June bug finds a dark, undisturbed place, it won’t survive long.

That being said, homes aren’t ideal environments for June bugs. They want a place that has lots of fresh green vegetation, other June bugs to mate with, and soil to lay their eggs. All this can be found outdoors.

Most June bugs will live for around 2-4 years depending on the species. They spend most of their life underground as grubs. Only one year of their life is spent as the flying adult insects we see in summer.

The longevity of a June bug will depend on common lifestyle factors such as food availability and predators. Humans also play a large role in their survival as they are often killed for being a nuisance.

Yet, June bugs will reproduce in such large numbers that they ensure the survival of their species despite the dangers they face.