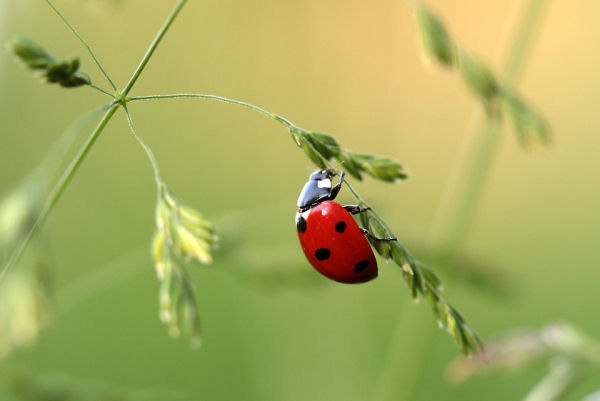 If you love seeing ladybugs in your yard then you’ll know that offering food they love is a great way to attract them. But what do ladybugs eat?

Ladybugs mainly eat aphids and small insects. As a general rule ladybugs are omnivores who will eat a variety of insects and plant material. Most ladybugs also like to eat nectar which they can source from flowers, vegetables, fruit, and herbs. To supplement their diet Ladybugs can also eat fungi, leaves, pollen, and tree sap. Ladybugs generally stay hydrated from the high water content in their food.

This gives you a basic idea of the ladybug diet. But you may have questions about the specifics of each of these foodstuffs.

This guide will take you through everything you want to know about the ladybug diet. We’ll also discuss some of the particular eating habits that ladybugs have.

What do Ladybugs eat?

Most Ladybugs are omnivores who enjoy a varied diet of insects, plants, and secretions. The subspecies of a ladybug will dictate the main source of their diet. Usually, this will be due to what foods are plentiful in their environment.

In general, ladybugs will seek energy and nutrients for a variety of foods. Let’s look at each of these.

Insects make up a large part of the ladybug diet. And there is one insect in particular that they love to eat most.

Ladybugs love to eat aphids. They will eat around 50-100 aphids per day. They have an insatiable appetite for these tiny insects.

In fact, Ladybugs are so good at killing aphids that gardeners and farmers release them in their yards and crops.  It’s a natural insecticide option that helps to control aphid problems. Ladybugs save the agriculture industry billions by preventing crop damage each year.

Ladybugs particularly like aphids because of the sugary secretion that they produce known as honeydew. This sweet-smelling liquid attracts ladybugs straight to a good source of aphids.

Although aphids are the primary target, ladybugs will eat a general range of small insects.

Other insects that ladybugs eat include:

This is just a general selection of insects that ladybugs will eat. You may notice that they are mostly soft body or scale insects that are slow-moving and easy to prey on.

Ladybugs will often prey on the eggs and larvae of larger insects. At this stage of their life cycle, these insects can be found in large quantities and are small enough for the ladybugs to easily eat.

Small insects and aphids are easy for ladybugs to source on most plants and leaves. They will crush the insect’s soft body and then eat them whole.

Insects provide ladybugs with a good source of protein, fats, and energy. Insects are also an excellent source of water in the ladybug diet to keep them hydrated.

Ladybugs are extremely active insects and need a lot of energy every day to stay healthy and well-fed. Feeding on a source of nectar can give ladybugs the energy they need to forage, fly and lay hundreds of eggs.

Nectar-producing plants attract ladybugs. That’s because the ladybugs can help with cross-pollination. The plant feeds the ladybug and in return, the ladybug helps the plant to reproduce.

Ladybugs can find nectar from a few surprising plant sources.

One of the best sources of nectar for ladybugs is herb plants with nectar-producing flowers. That’s because the flowers on herb plants are often flat-topped. These flowers are shaped like tiny bouquets made up of lots of flower heads on the stems.

Each of these flower heads produces sweet nectar which the ladybugs can eat. As the flowers are so small it makes it much easier for the ladybugs to easily access the nectar.

Popular herbs that ladybugs like to feed on are:

There are a lot of companion plants found beside herbs. These are often sweet-scented plants with nectar-producing flowers that attract ladybugs.

The ladybugs will find these are both a good source of insects and nectar for their diet.

They also like composite flowers such as daisies, cosmos, tansy, and dandelions. That’s because these flower heads are made up of lots and lots of tiny flower heads combined into one. Each of these tiny flower heads produces nectar for the ladybugs to feed on.

Vegetable plants are another great source of nectar for ladybugs. We mostly think of vegetables as the part of the plant we eat and forget that vegetable plants often produce flower blossoms.

The ladybugs will use these blossoms as a good source of nectar in their diet.

Common vegetables that ladybugs are attracted to are:

Ladybugs like to eat fruit as part of their diet. You may have noticed they have a bit of a sweet tooth and are attracted to foods high in sugar, so fruit is perfect for them.

They particularly like very sweet fruits which are soft, watery and have low acidity. This makes the fruit easy for the ladybugs to access the soft flesh and fruit juices inside.

Some harder fruit can be eaten by ladybugs if they are overripe and naturally become softer to eat. Ladybugs don’t like citrus fruits as they are too acidic for them.

Another good source of food for the ladybugs is the nectar that can be found in the fruit blossom. This is usually only available for short periods of the year.

Although this species isn’t into eating mushrooms. They eat mildew which is a very fine powdery substance that can often be found on the leaves of plants and vegetables.

Fungi is a great source of minerals and salts that are essential for the diet of some subspecies.

The 22 spotted ladybugs are one of the few mushroom-eating species. Mushrooms have soft flesh that is easy for these ladybugs to eat.

Adding leaves to their diet gives them a source of sterols, such as cholesterol. This helps with healthy reproduction for both males and females. Without this essential nutrient, the ladybugs can’t produce as many healthy offspring.

There are some ladybug sub-species that are herbivores and eat leaves and vegetation as the main part of their diet.

The two most common herbivore species are the Epilachninae and Henosepilachna. These are mostly found in Mexico and Kentucky state. They are commonly known as Mexican bean beetles and squash beetles.

These can often be considered as pest species due to their ability to destroy crops that they eat in large amounts of bean and squash crops.

Ladybugs are pollinators, as they help plants to reproduce by spreading pollen. Yet they also eat a lot of the pollen that these plants produce too.

When foraging for nectar in plant blossoms, ladybugs will often eat pollen at the same time. The pollen can also be found consumed when the ladybugs are looking for sticky nectar to eat.

These small amounts of pollen are beneficial for ladybugs as it’s a rich source of protein in their diet. This can complement the carbohydrate-rich nectar they eat from the blossoms.

There are some plants that ladybugs visit because they enjoy the pollen content. That means that these plants have to produce a large amount of pollen to ensure there is some left for the ladybug to pass on to other plants.

Pollen that ladybugs enjoy is:

Ladybugs can also eat tree sap and honeydew as a source of food. These are sticky substances you’ll see running down the tree bark. This is often caused by Tree aphids which attack sap-filled trees. And wherever there are aphids, the ladybugs aren’t far behind.

Tree sap is high and sugar which can give the ladybug energy, just like nectar. Tree sap is also rich in other nutrients such as minerals and amino acids. Honeydew is the sticky waste left by aphids, but ladybugs love it. Consuming these can help the ladybugs remain healthy and full of energy.

Ladybugs can’t easily get access to tree sap and rely on other animals or insects to break through the hard bark layers first. But finding a source of tree sap means ladybugs will take the opportunity to eat it.

Sap filled trees ladybugs are attracted to are:

How do ladybugs eat?

Ladybugs have a mouthpiece known as a mandible that allows them to chew. Their mouth a similar to the human mouth but on a much smaller scale.

Mandibles allow the ladybugs to hold and crush food and prey. They use a grinding motion to break the food down into smaller pieces. Ladybugs chew from side to side rather than an up and down motion.

What do ladybugs drink?

Ladybugs don’t need to purposely drink any liquids in addition to their food. That’s because the foods that ladybugs eat have a high water quantity which hydrates them at the same time.

A lot of the foods that the ladybug eat such as nectar, sap, and honeydew are basically sugary water. Although ladybugs will also drink small amounts of water they find on leaves and plants as they forage.

Honey is not a natural food in a ladybug’s diet, and they won’t actively seek it out in the wild. That’s because it would be too risky to try and raid a beehive and anger the bees inside.

That being said, a ladybug who is offered honey from a human is likely to try it. Honey is a sweet sticky substance that is like the saps and honeydew that ladybugs eat in nature.

Don’t expect a ladybug to eat a large amount of honey. A small drop is more than enough for them the sip.

Ladybugs do not eat ants. The two often come into close contact with each other as they compete for the same food sources of aphids and honeydew.

On their own, the two species live quite civilly. Yet, ladybugs can often cause ants to lose a big food source if they come along to gobble up a load of aphids. If there is a herd of ants against one ladybug then they can attack and kill it. So although they aren’t a predator, ants an be a threat to ladybug survival.

So unfortunately ladybugs can’t be used to keep an ant problem under control.

Most ladybugs are mainly insect eaters, with aphids as their insect of choice. This means that ladybugs are extremely beneficial for both gardeners and farmers to have around.

Ladybugs will also eat various sweet liquids such as nectar, sap, and honeydew as an energy and water source. This means they are attracted to various nectar-filled plants.

Ladybugs will also supplement their diet with other vegetation such as leaves, pollen, and fungi. This helps them meet all their nutritional need to stay healthy.

With such a wide variety in their diets, ladybugs are always sure to have a good supply of food around them.