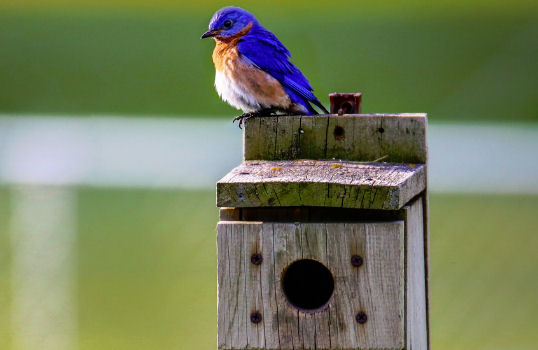 Bluebirds are popular birds that you probably love to see in your yard. You’re maybe wondering if bluebirds are found all over the world. So where do bluebirds live?

Bluebirds live in gardens, grasslands, woodlands, and parks of mainland USA, Canada, and Mexico. They prefer large open lands with foliage to perch on. Bluebirds prefer to build their nest in natural cavities or nesting boxes near grasslands.

There are three main species of bluebirds that have adapted to live in different environments. If you would like to know more about where bluebirds live then keep reading.

What Habitat do Bluebirds live in?

Bluebirds are medium-sized birds that you’ll see visiting your yard. Like most birds the bluebird lives in a nest they make themselves.

The preferred location for a bluebird to nest is in a natural cavity or manmade nesting box. Bluebirds love the protections and shelter that a small cavity space can give their chicks.

Bluebirds will often pick spots that suit their daily needs. Let’s take a look at what they need for survival.

Bluebirds are cavity-nesting birds. The problem is they can’t create cavities themselves and so they need to seek out ones that are naturally occurring.

Ideal spaces for bluebirds to nest include hollow trees, stumps, or rotted fence posts. These cavities are the dead and dying part of a tree also known as snags. Bluebirds will also seek out old woodpecker nesting spots.

Cavities provide cover for the young chicks during nesting seasons. Chicks can be prey for nearby predators. Keeping well-hidden gives them extra protection whilst their parents forage.

In the winter bluebirds use their cavity nests to shelter during bad weather. This means they get physical cover from cold, rain, and high winds.

Bluebirds need a good food source to survive. The bluebird diet is made up mostly of insects, and they will need to have a good supply nearby. In addition to insects, bluebirds will also eat fruits.

To have a good supply of insects and fruits you need to have a lot of vegetation nearby. These plants will grow the fruits and also act as a habitat for the insects.

If the bluebirds don’t have enough food nearby, they need to migrate to locations where food is more abundant. Bluebirds migrate north in spring to breed and south in winter for overwintering.

Bluebirds will get a lot of their water intake from high insect consumption. Fruits can also provide some water.

If bluebirds are relying on foods provided at garden feeders, such as mealworms, they require an additional fresh source of water close by.

Bluebirds are reliant on good areas to perch near their nest. They will often choose to perch on the branches of a nearby tree.

Perches are essential to bluebirds to help with their foraging. Bluebirds love to search for insects in large open lands. The perches give them an excellent lookout to prey on nearby insects. The positions allow them to swoop down onto the insects from above.

Ideally, old and dying trees should be left to decay without being cut down. This helps provide bluebirds with natural perches for their habitat.

Where do bluebirds live in the world?

Bluebirds are native birds only in the Americas. This includes the Mainland USA, Canada, and Mexico.

There are three subspecies of bluebirds who all live in different areas of the Americas.

Let’s take a look at the range that each species covers.

The most common bluebird found in the USA is the Eastern bluebird. In the mainland USA, they live east of the Rocky Mountains.

They will live all year round in the south East of the USA. In the spring and summer months, they will migrate into the northeast states. The bluebird is the state bird of Minnesota and New York.

Eastern Bluebird numbers in the USA are growing rapidly. It’s thought this is due to birdwatchers providing more nesting areas in the form of bird boxes. This has certainly helped the eastern bluebird populations to spread further west.

During breeding season eastern bluebirds can also spread into south-eastern areas of Canada. They will cover as far as Ontario, Quebec, and Nova Scotia.

Eastern bluebirds will also live year-round in Mexico and even as far down as Nicaragua.

Another common subspecies found in mainland USA is the western bluebird. This subspecies lives to the west of the Rocky Mountains.

Western bluebirds will live year-round in warmer states. They range over California, Arizona, New Mexico as well the south of the Rocky Mountains.

Western bluebird numbers in the USA are slowly declining by around 2.2% each year. This is due to loss of habitat, extreme weather changes, pesticide use, and removal of snag trees.

During the breeding season, western bluebirds will migrate up to Washington, Oregon, Nevada, and Montana. They will also move slightly into Canada into southern British Columbia.

The western bluebird will also live in Mexico year-round. Some of the species that spend the rest of the year in more northern states will migrate to Mexico over the winter.

Mountain bluebirds cover a similar range to the western bluebirds in mainland USA. Both species cover the states west of the Rocky Mountains.

The species live year-round in the central west coast states of Nevada, Utah, Colorado. Arizona and New Mexico. They also extend slightly up the pacific west coast from northern California into Oregon. The mountain bluebird is the state bird of Nevada and Idaho.

During the breeding season, the mountain bluebirds will move into the northwestern states.

The mountain bluebirds are the species with the longest migration range. In the winter months, the species will then make a long journey south to Mexico. They will travel as far down as Mexico City to overwinter.

Do Bluebirds live in trees?

Bluebirds do live in trees, yet they don’t live in the open branches. Bluebirds are cavity-dwelling birds. That means they like to build their nests in a small enclosed space. This is within old woodpecker cavities or larger snag holes in the trees.

You won’t see bluebirds building a nest in the open branches of a tree. They need the cover of a small cavity to build their nest.

If you don’t have any cavities in nearby trees, bluebirds also love to nest in a bird box. Hanging a nesting box on the tree will provide the bluebirds with a potential place to build their nests.

Where do bluebirds go in winter?

All species of bluebirds will migrate in the wintertime. Although some will travel very short distances and stay within a short-range.

The mountain bluebird can have a significant migration range for winter. This can be as far away as Alaska down to Mexico.

Bluebirds need to migrate so they have access to insects to eat during the winter. The northern states have climates that are too cold, so the insects go dormant during this time.

Dormant insects mean much less food for the bluebird to survive. The bluebirds would likely starve if they stayed in Canada or the Northern USA.

Weather such as snowfall and blizzards would also make it much harder for the bluebirds to source insects or even berries.

Migrating to warmer climates helps the bluebirds prevent problems that would threaten their survival.

Bluebirds are migratory birds that will change their location depending on the season. The three subspecies cover a large range over mainland USA, Alaska, Canada, and Mexico.

Bluebirds will move to improve their chances of survival. Finding insects and shelter from harsh winter weather is their priority. This is why you may see them coming and going at different periods throughout the year.