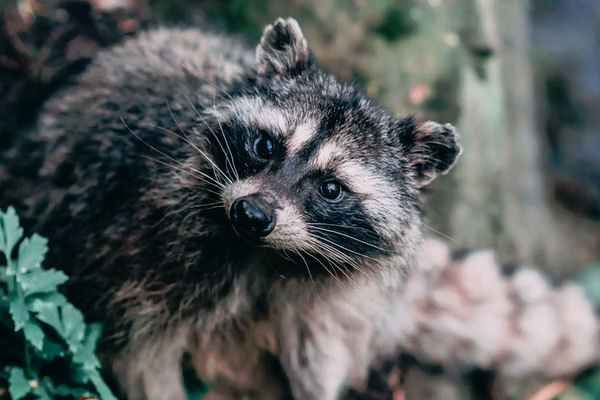 If you’re seeing a lot of signs that raccoons are around your area, you’ll know they have a den close by. But where do raccoons go through the day, and can you only find them in the USA? What you really want to know is just where do raccoons live?

Raccoons live in forests, marshes, mountain ranges, prairies, and urban areas of North, Central, and South America. They can also be found in specific areas of Europe and Asia. Tree and rock crevices are preferred denning areas for raccoons. They will also use dens abandoned by other wildlife or human property for safety and shelter.

Where do Raccoons Nest?

Raccoons will nest pretty much anywhere that they can build a den. Knowing what a raccoon looks for when choosing a den will help you to understand why they may choose a certain habitat to stay in.

Just like any wild animal raccoons need to feel protected in their dens. That means they’ll want to build a nest with as much cover as possible.

Cover helps to keep raccoons hidden from predators and sheltered from bad weather conditions. An ideal den is dark, warm, and secluded. Raccoons don’t like to have a den that is out in an open area.

Shelter is really important when raccoons are raising their young. This allows the babies to stay out of sight from predators when the mother raccoons are out foraging for food.

A good nesting area for a raccoon will have a good food source nearby. This means raccoons won’t have to waste so much energy by traveling too far.

Water is another important feature for raccoons. They will try to live as close to a source of water as possible. This water source may be natural or manmade.

Raccoons need water to help give them sensory feedback from the food they eat. Natural water sources are also the best place for raccoons to find large parts of their diet. They use these for access to crustaceans, fish, amphibians, and reptiles.

Raccoons are solitary creatures so they often choose a den where they have just enough space for snuggling up to sleep.

Yet they may also look for spaces that are slightly larger, such as when they are looking to birth baby kits. It’s not uncommon for raccoons to buddy up in nesting areas during the winter. This helps them to survive by sharing body heat and protecting themselves from hungry predators and harsh winter weather.

Where do Raccoons live during the day?

Raccoons are nocturnal animals so they’ll do a lot of their foraging during the night hours. During the day they’ll spend most of their time in their dens resting. Yet this will all depend on if they are in a rural or urban area.

Let’s look at the common places that raccoons make their dens.

Raccoons have adapted pretty well to humans living nearby. They’ve quickly realized that human property offers them a lot of benefits when it comes to creating their own habitats.

Common places that you can find raccoons on your property are:

Raccoons are excellent climbers and will easily gain access to your home through gaps or vents. These areas are all ideal for providing raccoons with shelter, warmth, and space.

Plus they have access to food sources such as birdseed, pet food, fruit trees, and trash cans. Raccoons will also use your lawn to dig for June bug grubs in the soil.

Raccoons in urban areas can often be seen during the day. That’s because they don’t have as much fear of humans as rural raccoons do.

If you’re having problems with raccoons in your yard check out my guide on 14 humane ways to deter them.

Raccoons that live in rural areas, will look for the same features from a den, but ones that are naturally occurring. Raccoons can be quite lazy so they won’t go to great length to create a den, they’ll want something they can move straight into.

Common places to find raccoon dens in the wild are:

Raccoons will often lookout for old dens abandoned by other wildlife. Foxes are the best animal for this as they are large enough to accommodate a raccoon.

In the wild, a raccoon isn’t too fussy about the den it picks. That’s because they will change to a new denning area every few days.

Where do raccoons live in the world?

Raccoons are native to the Americas and have been introduced to the Caribbean, Europe, and Asia by humans.

Let’s look at where each raccoon species lives.

The common raccoon (Procyon lotor) is the species you’ll be most familiar with. Common raccoons are native to North America and can be found in Canada and most territories of the mainland USA. Raccoons are not found in Hawaii or Alaska. That’s because they’re not native to these states and they have not adapted well to these areas.

There are some areas of the USA where you won’t find raccoons. This includes the rocky mountain range and desert environments found in states such as Arizona, Nevada, and Utah.

The common raccoon has many subspecies found all-around specific areas of the USA.

Unlike the USA the most common raccoon species found in central and South America is the Procyon Cancrivorus.

They are like the common raccoon but have shorter and coarser fur. They also can often be found near large water sources and get their main food supplies from eating crabs.

There are several smaller species of raccoons found in central and South America. These species and are much more adapted to subtropical temperatures.

Where you’ll find Raccoons in Central and South America

Island raccoons is the name given to a few different species which have been introduced to Caribbean islands hundreds of years ago.

The two main species in these areas are the Bahamian raccoon (Procyon lotor maymardi) which are found on New Providence Island in the Bahamas.

Another Caribbean species is the Guadeloupe raccoon (Procyon lotor minor). These can be found on the Guadeloupe islands of Basse-Terre and Grande Terre.

The Procyon lotor species have also been introduced into some areas of Europe. These raccoons made their way into the wild and started their own population contained to certain areas.

Places you can find significant raccoon populations in Europe are:

Europe has considered raccoons an invasive species since 2016. That means they are not allowed to be imported, bred, transported, or released into the wild. Due to their impact on the native wildlife Raccoons often have a pest status and are extensively hunted to control the species numbers.

Similarly, the Procyon lotor species have been introduced to various places in Asia, both in the wild and as pets. Yet once these pet raccoons get too big or aggressive they are often released into the wild too.

The issue with this is that these raccoons have no natural predators in these environments. They’ll take habitat and food away from local wildlife without having anything to control their populations.

Places, where raccoons can be found in Asia, are:

What Climate Do Raccoons live in?

Raccoons are animals that live in areas with temperate climates. They adapt best to hot summers and cold winter. Raccoons can also adapt well to climates with heavy rainfall throughout the year. They have a strong preference for wet, woodland areas.

Raccoon’s don’t cope well in dry climates. This is because raccoons rely on water for food sources and also eating behaviors.

Humans have tried to introduce raccoons to sub-arctic climates such as Alaska and Russia. The raccoons did not acclimatize well to these environments and quickly died off.

The common raccoon species covers a large range of land over the Americas. Due to this, they have also adapted to mountain highlands as well as subtropical rainforests.

Where do raccoons live in winter?

Raccoons do not migrate or hibernate in winter. They usually stay within a few miles range their whole life. Raccoons survive the cold weather of winter by making several physical adaptations.

Raccoons will try to find dens that keep them sheltered and warm from the weather. Although normally solitary, raccoons have been known to group together in dens over winter to keep warm.

Have you ever noticed that raccoons aren’t as visible in winter as in the other months? This is because they decrease their activity to save energy. They are able to go into short periods of torpor when the temperatures are extremely low outside. Periods of torpor enable raccoons to survive longer when food is in short supply.

Do raccoons live in trees?

Raccoons do live in trees but only in hollowed-out areas or crevices. You may have seen a raccoon asleep on a tree branch, but they will use this only for short periods of rest. Tree branches are not denning areas for raccoons. They don’t provide them with enough shelter from predators or the weather.

Trees can also be used by raccoons for shade to cool down when they are too hot. Raccoons will usually only do this when they can’t find a water source nearby when they are overheated.

Raccoons are highly adaptive animals that can live in both rural and urban habitats. They are native to the Americas yet have also been introduced to areas of Asia and Europe. Raccoons prefer to live in woodland near water sources, but they can be found in mountainous or grassland areas.

Raccoons have adapted well to living alongside humans. They will use your property as an area of shelter as well as a nearby food source.