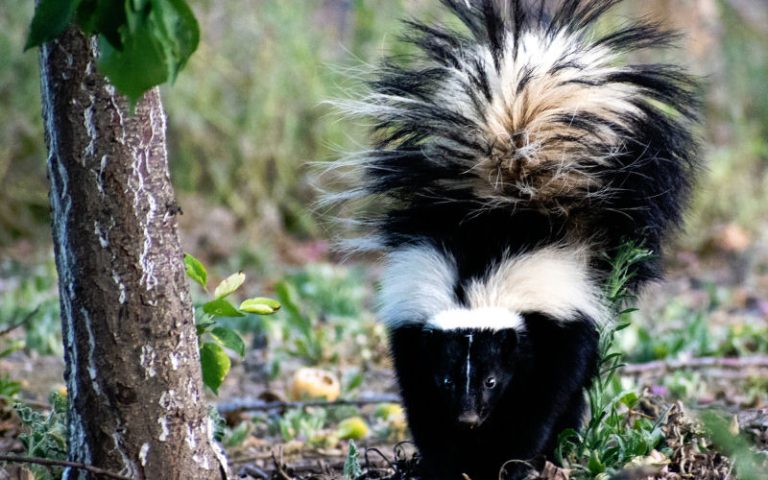 If there is one thing that skunks have a reputation for it’s being stinky. The toxic smell they emit is feared by many. But you may be wondering why do skunks spray?

Now that you know that a skunk spray is a defense mechanism you probably have a lot more questions about how it all works. This guide will take you through everything you want to know about skunk spray.

Why do Skunks Spray?

Skunks spray as a defense mechanism against predators. As smaller mammals skunks can be easy prey for larger animals such as bears, badgers, foxes, bobcats, and owls.

It’s a natural behavior that skunks do to protect themselves from being taken as prey. Skunks have really poor eyesight, so they can’t tell if an animal that’s close to them is a threat or not. Yet skunks won’t spray just anything that is close to them. They’ll first perform a series of warning behaviors before they release the spray.

Spraying for a skunk is the last resort. They would rather run away without needing to spray. So first they do a warning dance. This includes them puffing up their fur, raising their tail, stomping, and hissing at the predator. If this doesn’t work then they will release their spray onto them.

A skunk spray is so offensive it will stop any large animals in its tracks. The spray will also cause a stinging and irritation in the predator’s eyes which results in temporary blindness for around 15minutes. This allows the skunk to flee whilst the predator is distracted.

Skunk spray is usually effective enough to alert that animal not to approach a skunk again. You’ll find most mature predators won’t approach a skunk as prey. Usually, animals which approach skunks are young and immature and yet to experience the spray.

Skunks may also spray as a natural reaction to sudden loud noises or being startled. So it’s best to deter skunks from coming into your yard in the first place to avoid any stinky surprises at night.

How do Skunks Spray?

Skunks spray by pointing their tail at the threat, raising their tail, and then releasing the pungent liquid mist. A skunk spray isn’t gas, it’s made of a yellow, oily substance.

Skunk spray is stored in two glands at each side of the skunk’s anus. The spray is made up of organic chemicals known as thiols. These are pungent sulfur-smelling chemicals that smell like a mix of garlic and rotten eggs.

A skunk cannot spray if it doesn’t raise its tail. That’s because the muscles they need to use require them to raise their tail first. If the skunk can’t lift its tail then it can’t spray.

A skunk will usually spray as it’s being killed. This is due to the release of bodily fluids from the sudden attack.

If the first spray doesn’t work the skunk has enough liquid to spray up to 5 or six times. They will only use this amount as the last resort.

It takes a skunk around 10 days to replenish the substance if it’s been used up in one attack. During this time skunks are extremely vulnerable to predators if they can’t use their spray.

How Far can skunks spray?

A skunk can spray as far as 15ft from the threat. This gives them enough of a distance from the predator that they can’t attack and the skunk can get away.

How long can skunk smell last?

Once sprayed by a skunk the smell will linger for up to 3 weeks.

The length of time it takes for the smell to go will depend on how the spray is managed. Wild animals don’t have access to cleaning facilities other than water. As the skunk spray is an oil substance, water alone won’t remove the smell. This is effective for the skunks as it acts as a long-lasting warning for the predators not to mess with a skunk again.

For humans and pets, we have the luxury of using cleaning chemicals to remove the skunk stench. If treated with the right chemicals, you’ll be able to completely remove the scent. However, using only basic shampoos you’ll likely still have a faint scent lingering for around 2 weeks.

It’s best not to use water on yourself or a pet straight away. Applying soaps first will help break down the oily barriers. If you put water on first, this can compound the smell and make it harder to wash away.

Read More: Whats Do Skunks Eat In the Wild?

Can you stop skunk spraying?

You won’t be able to stop skunk spraying, but there are ways you can reduce your risk of being sprayed.

The good news is that skunks are nocturnal creatures that mostly roam around at night. That means that unless you’re out late at night you will normally be free of suddenly bumping into and startling a skunk.

You may however stumble across one when taking out the trash or the dog for a walk at night.

If you see a skunk and they look angry then head back the way to came. Or you may be able to step sideways across a street. Don’t go in the direction the skunk is going or you’ll get caught out. Remember skunks can spray up to the length of 3 humans away.

You may have a skunk in your yard or crawl space that keeps emitting a stench. In that case, try not to make any sudden loud noises or movements until the skunk is removed. Even walking on flooring with heavy shoes can be enough to startle a skunk underneath the floor.

How to get rid of skunk smell

If you or a pet is unlucky enough to get sprayed by a skunk then don’t worry. There are ways that you can minimize the stench they’ve left on you.

Don’t listen to the advice to use tomato or lemon juice to remove the smell. You’ll just smell like tomato and lemon juice mixed with rotten eggs!

You can buy de-skunking shampoos from amazon (This one is the one you want). These are great if you don’t have the time or the ingredients available to make your own spray.

You can make your own de-skunking spray at home, this is the mixture advised by the Human Society.

Mix all the ingredients together and wash down any clothing, pet, or surface covered in the skunk spray.

Don’t store this mixture in a bottle as it can expand and explode. Also be mindful to rinse the mixture off with water immediately as the bleach can discolor hair, surfaces, or fabrics.

Your clothes should be placed into the washing machine with your regular laundry detergent and a cup of baking soda.

Skunk use their spray as a defense mechanism against predators. They will activate the spray if they feel threatened or surprised.

The spray is so foul it allows the skunk to flee, but also warns off predators from attacking a skunk again. The stench can last a long time if it goes untreated.

If possible try to observe the skunk behavior to avoid being sprayed. If your pet is sprayed then you can use specialist shampoo to remove the foul stench so you can get them back to smelling normal.