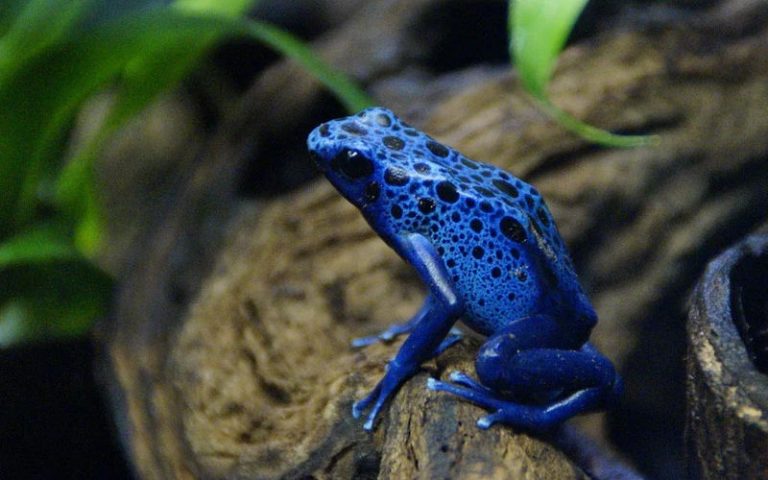 Frogs are slimy creatures with mucus-like skin. If you’ve come across one in your yard you may be wondering are frogs poisonous?

Now you know a frog’s toxins aren’t going to kill you, but you probably want to know more. Perhaps if those poison secretions can harm small children or pets in any way. This guide will take you through everything you need to know about how dangerous frog poison can be.

Are Frogs Poisonous or Venomous?

All frogs are considered toxic. The way they deliver these toxic chemicals to their victims will determine whether they are poisonous or venomous. Let’s look at each one.

A poisonous animal is one that secretes toxic chemicals that are harmful when eaten.

A poisonous frog is one that produces harmful chemicals on its skin to stop predators from eating them or more of their species.

All frog species release some form of toxic chemicals on their skin. The toxins that a frog releases can range from harmless to deadly for both animals and humans.

For animals, they will normally encounter these poisons on a frog’s skin when they try to eat one.

For humans, the poisons from the frog are absorbed into their skin or from hand-to-mouth contact after handling a frog.

A venomous animal is one that bites or stings to secrete harmful toxins.

All though all frogs are poisonous, not all frogs are venomous. To be considered venomous a frog needs to have some way to pierce the skin of another animal to deliver its venom.

There are only two species of venomous frogs:

Both of these species deliver this poison venom by head-butting their victim with tiny spines on their skull.

These spines can pierce through human skin. Although animals may be trickier due to thick hides, fur, or feathers. It’s thought that these frogs get a better effect by piercing inside the animal’s mouth.

The venom of these frogs is 2-25 times deadlier than the most venomous snakes in Central and South America. The good news is that these venomous frogs live in Brazil.

How To Tell If A Frog Is Poisonous

All frogs are poisonous, but learning which frogs are harmless and which ones are dangerous can be lifesaving. The most poisonous frogs are the ones that will kill or seriously hurt you if you touch their skin.

There are two families of highly poisonous frogs:

There are around 200 known species of poison dart frogs and 16 species of Mantella.

Although these frogs are tiny some have enough toxic secretions to kill ten adult men. In fact, the poison dart frogs got their name from Native Americans who used their secretions on blow darts for war and killing prey.

Mantella frogs are highly toxic to humans but not as deadly as some poison dart species.

The best way to judge if a frog is poisonous is by its coloring. Poison dart frogs will have some degree of bright coloring on them.

The vibrant colors of a poison dart frog are a natural warning sign for predators to stay away.

Producing bright coloring and poison secretions takes a lot of energy for frogs. That means often the species have to rely on animals being scared by the color rather than the toxins they deliver.

Where do Poisonous frogs live?

Poison dart frogs live in the wet, tropical forests in Central and South America. The Mantella species are native only to Madagascar.

Both these frog families need high temperatures and humidity to thrive.

Most poison frogs live in the leaf litter or near water sources in the rainforest. Yet some live high up in the tree canopies and don’t come down.

There are no deadly frogs that are native to the mainland USA. Any known poison frogs in the USA are in captive care, such as zoos or the pet trade. However, some poison dart frogs have been introduced to the islands of Hawaii.

What makes a frog poisonous?

Frogs are able to create poison secretions on their skin, through their diet. That means they are able to transform the components of their diet into toxic chemicals.

For poison dart frogs they can become so toxic due to their insect diet of ants, mites, maggots, spiders, and beetles. The frogs derive their toxins from these insects. That means that when they stop eating a diet of these insects, they become non-toxic.

As frogs in the USA don’t have a diet of these insects, they can’t make the same poisonous secretions as the tropical frog species.

The types of toxins a poisonous frog secretes are lipophilic alkaloid toxins such as:

These chemicals are effective neurotoxins. That means they will damage, destroy, or impair the nervous system of animals and humans.

The potency of each chemical will determine the severity of the side effects. This ranges from mild symptoms such as nausea and vomiting right up to paralysis, brain damage, or death.

There is a traditional practice among South American natives that use frog poison in a ritual known as Kambo. The frog poison is used to cleanse to the body of various health conditions, bring luck, and improve energy.

Some people believe Kambo can cure:

Scientists believe Kambo can have a placebo effect due to the side effect of the toxins. This can result in blood stimulation, muscle relaxation, and brain stimulation. There is no scientific evidence to prove or disprove the practice of Kambo. Yet there are dangers as incorrect use of the poison has resulted in death.

Despite this, the toxins from the poison dart frog can create medicines. One such medicine is the painkiller Epibatidine. Other medical uses for frog toxins are being trialed. This includes medication for is muscle relaxants, heart stimulants, and appetite suppressants.

Are frogs poisonous to dogs?

There are no species of frogs in the USA that are poisonous to dogs. You may find that your dog has a negative reaction if they eat or lick a frog. That’s because the frog will emit foul-tasting chemicals into the dog’s mouth.

Two dangerous species of toad that live in the USA are the Cane Toad and the Colorado River Toad.

Toad toxicity can cause vomiting, increased salivation, mouth-frothing, pain, and seizures. If left untreated a dog can die from toad poisoning.

Are frogs poisonous to cats?

In the USA there are no species of frogs that will poison a cat. Even if a cat eats or licks a frog, it will not die. They may vomit or lose their appetite for a while due to the foul-tasting secretions.

Once a cat has eaten a frog it will normally not try another one due to the taste. That way you can see how these secretions are effective at protecting frogs from predators.

Just like dogs, cats can fall victim to toad poisoning.

Be aware that toad toxicity can happen from eggs or even tadpoles. That means your cat or dog can be at risk from outdoor water sources.

As a general rule green tree frogs are harmless. Like all frog species, they secrete toxins to ward off predators. These toxins are not dangerous to humans or pets.

If your dog or cat eats a green tree frog, they might vomit or go off their food. That’s because all frogs taste horrible. However, a green tree frog does not secrete enough toxins to kill your pet.

All frogs are poisonous, but the degree of toxicity will vary depending on the species. In the USA there are no frog species that secrete toxins that are harmful to humans. Frog toxins can affect pets but no more than an upset stomach.

There are deadly frogs that can kill through poison secretions on their skin. These are small frog species that live in the rainforests of South America and Madagascar.

Even though these frog species live in captivity in the US, they are non-toxic. This is due to the fact that they do not have the correct diet which allows them to create the toxic substances found in their skin.