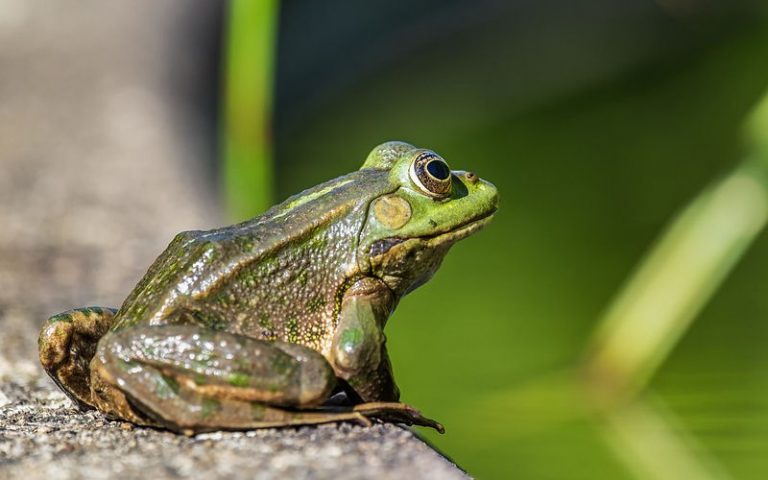 We all know the characteristic ribbit sound that frogs make to communicate. However, frogs you may be wondering how other frogs hear these sounds.  After all, they don’t appear to have earlobes like humans. Which now has you thinking do frogs have ears?

Frogs do have ears, however, they have no visible outer ear structure. A frog’s external hearing system consists of a tympanum, a type of eardrum held in place by a cartridge.  The Tympanum is located on the side of a frog’s head behind its eyes. The purpose of a frog’s tympanum is to send vibrations to its complex inner ear structure to process sounds.

Now that you know frogs do have ears, you’re probably curious about how they work. This guide will take you through everything you want to know and a frog’s sense of hearing.

Sound good? Then let’s get started.

Why do frogs need to hear?

Frogs are like any animal, they use hearing as a sense to navigate their world. Hearing is an important part of a frog survival strategy for many reasons including:

Frog have adapted their hearing systems over millions of years to give them the best chances of survival. As frogs live on land and in water, they need to adjust their hearing to adapt to both of these environments.

How do Frogs hear?

Frogs have 2 parts to their ears:

Let’s take a look at how each part works.

The frog’s middle ear is the part that you can see on the frog’s head. It starts with the tympanic membrane or tympanum. This is like the human eardrum.

The tympanic membrane is stretched over a piece of cartilage known as the tympanic ring. This stretching allows the frog to pick up vibrations.

These vibrations and transmitted along a thin piece of bone called the columella and onto the Operculum. This structure leads the sounds to the frog’s inner ear structures.

The purpose of the frog’s middle ear is to transmit the external sounds and not to process them.

A frog inner ear structure is quite a complex bony structure with eight specific fluid-filled areas.

How the frog ear works

A description in a scientific paper on the mechanics of the frog’s ear describes the function of each part:

If that’s all a bit too scientific for you let’s look at it in more basic terms.

The frogs ear structure are lined with cell and hairs which pick up the vibrations sent from the middle ear. This movement in the cells causes the frog to create an electrical signal to their brain.

Yet frog hearing is much more complex. Like humans, the frog’s inner ear structures are linked to their sense of balance.  Also, a frog’s hearing system is actually connected to other parts of its body including the lungs and mouth.

Do Frogs hear with their lungs?

Frogs don’t hear with their lungs, but they have an important part to play within their auditory system.

As the frog can pick up pretty much any vibration around them, they need a way to sift out the noises they need to hear. For female frogs, they want to hear the calls of the male frogs.

The frogs will fill its lung full of air. This helps to reduce a lot of unnecessary noise and only let through the vibrational frequencies of their own species calls. Scientists believe this works like using noise-canceling headphones.

The frog will still hear other noises. But by using their lungs they are more attuned to hearing mating calls, which improves reproductive success for the species. Otherwise, a frog would be wasting energy responding to unnecessary noises.

Do Frog hear with their mouth?

As a general rule frogs don’t hear with their mouth. They do have structures connected to their mouths which helps to improve their hearing.

There is a ‘deaf’ species of frog known as the Gardiner frog. Although this frog is not truly deaf, they don’t have the same middle ear structures as other frog species.

Instead of a tympanic membrane, the Gardiner’s frog will use their mouth to detect sound vibration onto bony structures. So effectively the Gardiner frog does hear with its mouth.

Do frog hear with their eyes?

Frogs do not hear with their eyes. The tympanum of the frog is found close to their eyes but is not involved in the eye anatomy.

Frog eyes and ears are not connected to each other. However, a frog will use both sight and sound to assess its environment. The two senses together help the frog to find prey, mates, and avoid danger.

How good is a frogs hearing?

Frogs do have good hearing with situations they need to help their species survive. That’s because a frog has adapted their hearing to work as well as it can in situations they encounter thought their life cycle.

Frogs will generally hear and communicate at sound below 12 kilohertz (kHz). Scientists have found that the Endemic Bornean frog is the only known amphibian to have ultrasonic hearing (>20 kHz). Studies have found that this frog species can hear at frequencies up to 38 kHz.

Although frogs have good hearing it is very specific to what they need to hear to survive. Situations such as hearing mating calls, detecting prey, and avoiding predators.

Frogs have actually been known to adapt their behavior around environmental human noises. For example, frogs will reduce their mating calls around areas of high road traffic. That’s because they are aware it’s harder for females to hear calls when they hear competing with loud external noise.

Fogs use their tympanum to detect sound vibration underwater. Together with the eastucuan tube they can equalize the water pressure and detect the direction of sounds.

Similar to being on land the frog will cancel out any sounds that don’t relate to their species’ vibrational frequencies.

Even frog tadpoles have adapted to this and will ‘scream’ at the right frequency when in the water.

Frogs have ears, but not the way that mammals do. They use a tympanic membrane as an external eardrum to transmit and process vibrations.

The structure of a frog’s ears allows them to use their mouth and lungs to make special adaptations. This helps to drown out sounds or to hear specific frequencies.

Although frogs don’t hear the same way as humans do, they can hear around the same frequency ranges as humans. All Frog species have adapted their hearing system well to hone in on survival tactics and adapting to their environment.