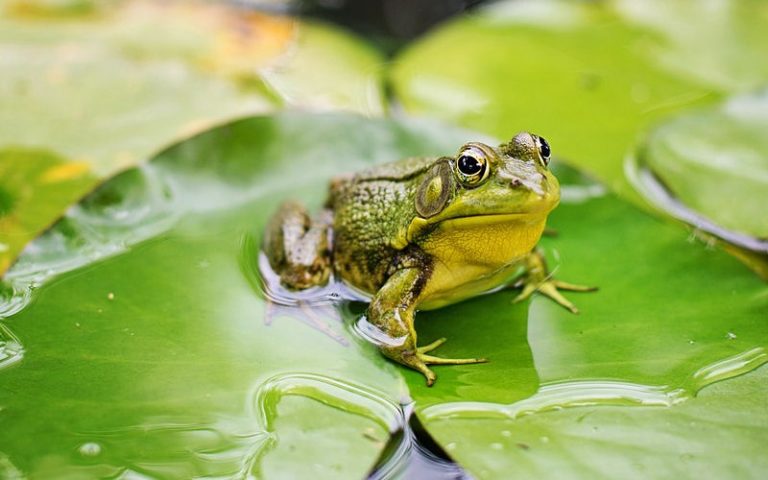 As the ponds and lakes start to freeze over in the winter, you’re probably wondering what happens to the frogs that live in them. Where exactly do they go? And do frogs hibernate in winter?

Frogs do not hibernate in winter. As cold-blooded amphibians, they go into an inactive state known as brumation. This winter dormancy is essential to help frogs conserve energy, and survive harsh weather conditions and lack of food. Brumation slows a frog’s metabolism and temporarily stops essential activities such as eating, drinking, defecation and movement.

Now you’re probably wondering what’s the difference between hibernation and brumation? And where do frogs go to bruminate? This guide will take you through everything you need to know about what frogs do during the winter.

Sound good? Then let’s jump to it.

Do Frog Hibernate or Bruminate?

Hibernation and brumation are both states of dormancy and will often be used interchangeably when you read about frogs.

Let’s take a look at why frogs bruminate rather than hibernate.

Hibernation is an extreme state of dormancy. The prolonged period of activity only applies to behavior that warm-blooded animals do over the winter months.

Hibernation is made up of extended periods of torpor which allow animals to:

The slowing of regular body activities helps animals to save energy and function for long periods without food. During this winter this is helpful as it means animals can escape cold weather conditions and low food supplies.

Animals such as bats can hibernate for periods of up to 6 months at a time. However, hibernators will wake every few weeks to forage and defecate. Changes in climate and animal hormones trigger hibernation.

Brumation is the same as hibernation but for cold-blooded animals (ectotherms) such as amphibians and reptiles. Frogs and other ectotherms rely on their environment to provide them with heat rather than their blood.

Animals that bruminate will find a habitat that is safe and warm to stay inactive. Brumation causes frogs to:

Just like hibernation, a period of brumation will help animals save energy, but not as severely as hibernation.

During brumation amphibians and reptiles can’t lower their temperature as this is weather dependant.

Periods of Brumation can last from a few days to 4 months.

Do Frogs Remain Inactive During Brumation?

Frogs don’t stay inactive during the whole winter period. They will occasionally increase their activity and forage for food. How often they do this will depend on the weather. Milder days will cause frogs to stop brumating and become active again. If the weather gets colder, they will return to a state of brumation.

That’s why the main difference between brumation and hibernation. Those periods of activity are completely weather-dependent due to frogs being cold-blooded. Their bodies cannot function at extremely low temperatures.

Do Frogs Die In Winter?

If you’ve ever encountered a frog that appears frozen to death, don’t be fooled.

Frogs can actually appear frozen and still survive. Its heart will even stop beating, and its lungs will stop breathing. That’s because although they look frozen on the outside, they aren’t frozen solid on the inside.

A frog’s liver can produce high levels of glucose high acts as an internal antifreeze and stops its internal organs from freezing over. As long as the frogs maintain around 30% of their body in the antifreeze state, they will survive.

Frogs can die if they begin to thaw out too early and are then hit with a sudden cold snap. This is known as ‘winter kill.’ The frog will die because the process of waking uses up those vital glucose stores to prevent their organs from freezing.

This anti-freezing behavior starts when temperatures reach 32°F (0°C) and can keep frogs safe up to a temperature of -4°F (-20°C).

What do Frogs Do in Winter?

In winter, food supplies are limited, and weather conditions are harsh for all animals.

Frogs need to prepare so that they to survive the winter period. This winter preparation will help to keep them safe, warm, and protected as they bruminate.

Let’s look at how frogs achieve this.

During the warmer season, frogs will eat as many insects and meat as possible. In fact, they will eat much more than they need for their daily energy. The reason they do this is to store as much glycogen as they can to use during brumination.

Unlike mammals that store fat, glycogen is much easier for frogs to use. That glycogen is essential for that antifreeze effect during the winter.

If frogs don’t have enough glycogen stored to see them through winter, then they’ll die off before the temperatures begin to rise.

For a successful brumination period frog needs to find a good location the stay for prolonged periods. A good brumination spot will be one that keeps them as warm and safe as possible. The choice of bruminatation spot will depend on whether a frog is aquatic or a land dweller.

Frogs that mainly live in water will also bruminate for the winter in the water. They do this by going under the water surface and sitting still on the mud layer below.

Moving Water is surprisingly good at insulation and will keep the frog above freezing temperatures. That’s why frogs go under the surface.

They can breathe by diffusing oxygen through their skin rather than taking breaths. This is a process called cutaneous respiration. As the frog is most inactive they don’t need as much oxygen as they do when they aren’t bruminating.

Frogs do not burrow under the mud when in the water. This would cover their skin and prevent them from getting a good oxygen supply for the water.

If the pond the frog chooses to bruminate in is too shallow there is the risk it can freeze over and kill the frog.

Frogs that spend most of their time on land, such as tree frogs, will usually find a warm place to burrow or hide away during the winter.

Land frogs can be found under leaves, bark, small burrows in the soil, or crevices in trees, rocks, and logs.

Land-dwelling frogs are at greater risk of freezing than aquatic frogs. These are usually the species that will use their glycogen stores. This will prevent their organs from freezing when exposed to winter conditions.

Land-dwelling frogs may also be at greater risk of being found by predators such as hungry raccoons. They often come across frogs as they forage when supplies are scarce.

A frog’s ability to survive the winter will depend on how inactive it can stay. Brumination allows frogs to have short periods of activity the forage for food and defecate.

Too much activity during inter will reduce the frog’s energy supplies. Especially when food sources are scarce and not readily available to replace that lost energy.

If the frog uses up too much of this energy they may not have enough energy left to bruminate and will likely freeze or starve to death.

Do Frogs Migrate in Winter?

Some species of frogs will migrate to more shelter areas or deeper pools of water during the winter.

Moving to these locations can help to ward off the issues that frogs have when trying to find a good place to bruminate over winter.

Deeper water reduces the risk that an aquatic frog will freeze. Moving to a sheltered environment means land-dwelling frogs have better protection from the weather. They also have a better food supply and keep themselves safe from predators.

You won’t see frogs doing a cross-country migration like bats or birds. However, they will travel distances as far as 3 miles (5km) from their breeding sites.

Once frogs come out of brumination in spring they will start to return to their breeding sites.

Frogs go through a period of inactivity in winter known as brumination rather than migration.

Although the two terms are used to describe dormancy, they are often used interchangeably. Yet Brumination is for cold-blooded ectotherms like frogs. Hibernation is for warm-blooded endotherms.

Brumination allows frogs to slow down their body activities to save energy and survive cold weather and low food supplies. Frogs usually bruminate below the water in ponds or in soil burrows and crevices.

To avoid dying over in cold conditions frogs can prevent internal organ freeze. They prepare for this by overeating in the arm months and using the sugar to prevent their blood from freezing.

Frogs can also migrate to help them find a better brumination spot. A good one won’t freeze over or make them an easy target for predators when they are inactive.

2 thoughts on “Do Frogs Hibernate? Where Do Frogs Go In Winter?”