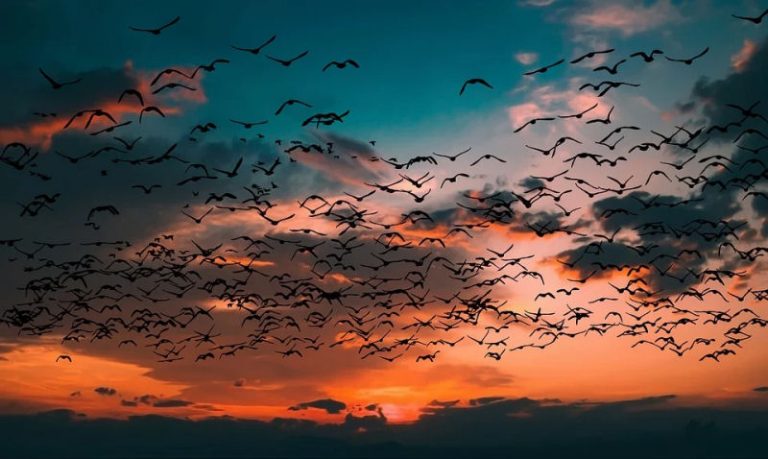 You know that birds are active during the day, but they seem to disappear once the sunsets. You may think that most birds will go to sleep at night, but you‘ve also heard them chirping away in the small hours of the morning. This has probably left you wondering do birds fly at night?

We’ll go through 9 reasons why you might see a bird flying at night.

So let’s jump right in.

Do birds fly at night?

Flying is a habitual behavior that all birds will do. All birds can fly at night, but the frequency will depend on a lot of different reasons.

Nocturnal birds tend to live away from urban areas. You’ll mostly find them in woodlands, near water, or at sea.

Diurnal birds (those that are active in the day) will try to sleep at night as much as they can. This allows them to rest and avoid predators. Yet diurnal birds will fly at night if they need to. Diurnal birds don’t have eyesight which is accustomed to low light levels. That means that night flying isn’t natural to them, but more of a survival instinct.

Birds fly at night as a way of moving.

When birds fly they need to move from their current location. Just like we would walk or run, a bird will fly.

Let’s take a further look at why birds might need to move during the night.

9 Reasons Why Birds Fly at night

Birds will fly at night to find good sources of food. Nocturnal birds are usually found foraging at night. This is a time when a lot of insects or small animals will be active for the birds to prey on.

Flying around help the birds to carry out various behavior which they can catch insects mid-air or swoop down to attack and kill prey.

These birds will often stay on a perch and watch closely. Once they see the perfect opportunity they will take off into flight to catch their meal.

Food helps to provide birds with enough energy to fly around during their active hours.

Flying at night is part of the mating rituals for nocturnal birds.

Springtime can be a particularly busy time for birds to carry out flying displays as its prime breeding season.

Male birds will use various flying techniques such as wing flapping, diving, and feather flashing. This helps them to attract the attention of female birds. These flying displays will often happen alongside lots of singing and chirping. The males with elaborate displays are attractive to the females and most likely to mate with them.

Diurnal birds will mostly rest at night, but one thing is sure to make them move, and that is any sign of danger.

If a bird thinks a predator is near it will become very noisy and will fly away to flee from danger. The fact that birds can fly means they will be able to get to places that most predators can’t reach.

The fact that a bird who is normally only active during the day is awake is a big warning sign for other birds in the area. It’s almost like a big alarm sounding to let them know predators are around.

If the bird has left behind eggs in a nest it may continue to fly around the nest whilst swooping and diving at the predator. They do this to try to scare them from eating the eggs or young chicks who can’t fly.

Birds will choose an area of land that they claim as their range of territory. This is very carefully selected to give them a better chance of survival.

A good territory will provide birds with food, water, and cover to nest. Good territories are in high demand and once a bird finds a good one they do not want to give it up.

Flying is a way that birds can defend this territory. The males will often fly around the area to scope out if there are any other contenders for the space.

Flying allows birds to show aggression towards other birds. Chasing is a technique that birds will use if other birds are trying to muscle in on their territory.

Birds that are normally active during the day can become easily disoriented. This can cause day birds to fly during the night.

The most common reason for birds to become disorientated is light pollution.

Urban street and house lights can cause diurnal birds to become disorientated at night. That’s because the birds can’t tell the difference between natural daylight and artificial lighting.

It’s common for birds in urban areas to wake earlier than birds in rural areas. This happens as some species rely on light to regulate their sleep cycles.

Loud noises or movements can also cause disorientation in birds. This can cause birds to startle awake and fly away in an attempt to flee for safety.

The night is a much better time for some birds to migrate as nightfall brings with it a cooler and calmer atmosphere. This helps birds to conserve energy as they don’t need to work so hard at flying and also lose less water.

Birds of prey will often need warmer conditions to fly so will make migration flights during the day. This means smaller birds can avoid these predators by flying at night.

The birds will call to each other through these flights to make sure that they stay together. Flying together at night ensures safety in numbers for a lot of bird species that are flock orientated.

Birds also fly at night to maximize the daytime they have in a new environment. Landing in a new place at night can leave birds more vulnerable to predators that the birds can scope out during the daytime.

Nocturnal birds will do what diurnal birds do but during the night. This includes young chicks learning to fly.

Nocturnal baby birds need to combine instinct and practice to perfect their flying skills. They will do this under the watchful eyes of their parents during the night.

Learning to fly is a process for baby birds and it will take time for them to get the hang of it. Once they do, they will practice their skill by flying at night as much as they can to try out their newfound freedom.

Learning how to fly allows nocturnal birds to learn to survive as adults. It gives them the freedom to forage, find mates, seek shelter, defend territory and protect themselves from predators.

Birds are intelligent animals and they will learn a lot through socializing and playful behaviors. Birds need a lot of mental stimulation which interacting with other birds can bring.

Socializing with other birds can help young birds learn how to fly, find food, interact and look out for each other. Chasing and taunting other birds is a common form of flight play that birds will do. This can be between birds of the same or different species.

Flight is a big part of play and socializing between birds both diurnal and nocturnal.

Birds can often be seen together in swarms which gather and fly together around sunset. The bird most well-known for this is the starling who will carry out a behavior known as a murmuration.

These behaviors are usually designed to confuse predators and to keep warm before they settle down for the night. Once the flight routine has subsided and full darkness sets in the birds will rest for the night.

Which birds fly at night?

Most birds that fly at night are nocturnal species. But, some species are crepuscular which means they are most active at sunset and sunrise. Let’s look at which birds you may see flying at night.

Owls are nocturnal birds of prey. They are designed to fly at night with their big eyes seeing better in the dark. Most, but not all, species of owls are nocturnal. The most common owl species you’ll see flying at night is the great horned owl.

Nightjars are another nocturnal species of bird. They are quite noisy birds that like to hunt for insects during the darkness. Common nightjars you’ll see flying at night are whip-poor-wills, common poorwill, Paranaque, and nighthawks.

Herons are a bird species that are active at night. They mainly use the dark hours to ambush prey at the water’s edge. The herons will fly to and from water sources overnight to reach a good supply of food.

A lot of shorebirds are crepuscular in nature. This is due to the rising and lowing tides exposing their access to food at dawn and dusk. Shorebirds that you’ll see flying at night are the American woodcock, oystercatchers, plovers, and stilts.

Some seabirds will fly over the water surface at night searching for food. Ocean animals are a good source of food for them and they are much easier to catch when they rise to the surface at night. Seabirds you’ll see flying at night are murres, albatross, and petrels.

During the summer months, waterfowl bird species are usually more active at night. This changes once the winter weather sets in. Waterfowl will mainly fly around to feed at night. It’s thought that some species of waterfowl are adapting to night feeding to avoid human activity during the day.

Common waterfowl you’ll see flying at night include ducks, Canada geese, coots, loons, and scoters. You can often recognise geese migrating due to their loud honks as they fly.

Which bird migrates at night?

Diurnal birds that you see flying at night are more than likely moving from predators. Yet a lot of diurnal birds will migrate before the winter arrives. This is most common in September and October. Here are some common birds you’ll see migrating at night:

A few of these bird species will normally fly together in flocks. You may be able to identify them by the distinct flight call that they make to each other. This swarming behavior helps the flock stay together whilst navigating new territory.

So to wrap it up, birds do fly at night. The frequency that they do this will depend on the species of birds. Some birds are nocturnal and are instinctively more active at night, just as any other bird would in the day. This includes them finding food, mates, shelter, and socializing.

Migrating birds will often fly at night as it provides them with many benefits such as saving energy and safety from predators.

If you’re unsure which bird you’re seeing flying at night, you can try to identify them by their distinctive flight calls.