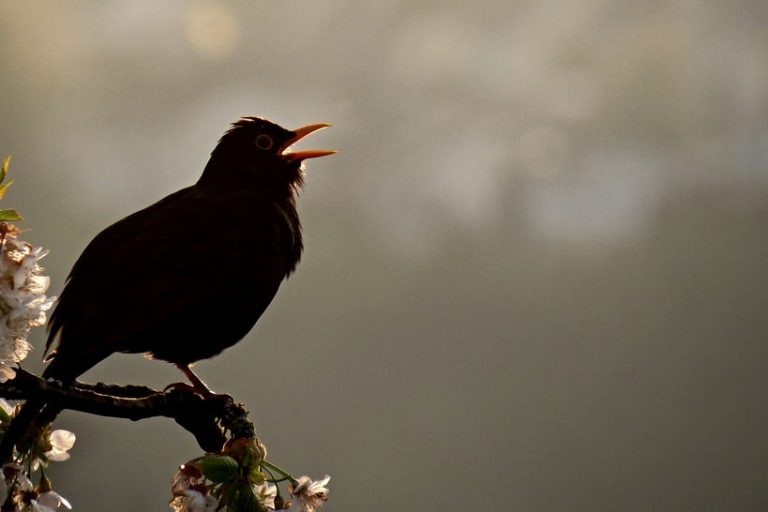 Ever been lying in bed listening to birds chirping away and wonder ‘why do birds chirp at night?’

They’ve been flying around all day, don’t they need some sleep like the rest of us?

Instead, they are singing away in the dead of the night. The official name of birds chirping in the night is nocturnal vocalizations.

Although chirping at night is natural for birds, it can be very annoying for you.

As a light sleeper myself I understand, it can be hard to fall asleep when you have birds being noisy in your yard. Then lack of sleep impacts you the next day.

Before you throw your pillow out the window at your chipper yard visitor, read this guide.

An understanding of why birds chirp at night can help you to contain your frustrations with your night-time disruption.

And since you’re awake you can always use it as a time to do a rare bit of backyard bird watching at night.

Why do birds chirp at night?

For most birds, it’s habitual behavior.

Let’s take a further look at what birds might be trying to communicate when they chirp at night.

9 Reasons Why Birds Chirp At Night

Birds are very careful about their territory as a good area will help them to survive better.

A good territory that provides shelter, food, water, and nesting sites. Once a bird finds this, they want to hang on to it.

Chirping and singing is the most common way a bird signals that territory belongs to them. They will even negotiate territory boundaries through song.

If another bird is trying to muscle in on their territory, birds are likely to make a lot of noise trying to chase the newbie away.

Chirping and singing is part of most birds’ ritual to find a mate.

Springtime can be noisy with bird sounds at night as it’s prime breeding season.

Males will sing to attract the attention of the female birds. Females usually choose the males with the most complex songs.

If you have a noisy male bird near you, expected little nestlings to come along soon.

Food gets birds excited and they will make all sorts of noises when it’s available.

Social birds will often signal to the flock about a new food source.

If there are a few birds around a new exciting food source they tend to chirp and squabble when fighting each other for the food.

Birds chirp and sing more when they get extra food.  It’s thought this is a good signal from a male bird that they can provide for females.

It could also be down to birds having extra energy from the food to sing.

When birds are in danger they and become very noisy.

Predator attacks and loud noises cause birds to become distressed and they chirp loudly as a way of sounding an alarm.

This can also help to protect other birds in the area by alerting them to potential danger.

Other birds react to these warning chirps, which has a ripple effect on noise levels.

Birds that are active during the day can easily become disorientated. This causes them to chirp through the night instead.

The most common reason for this is light pollution.

Urban Street light can cause confusion for birds. They can’t tell the difference between artificial and natural daylight.

Loud noises or movements can disorientate birds too. This wakes them early from rest and triggers them to chirp and sing.

Most migrating birds will fly at night as the moon and stars help them to navigate.

Migrating birds are often heard chirping in unison. Flight calls are the official name of these chirps.

These flight call chirps are a teamwork strategy used by birds. It helps them stay together and keep safe when in an unfamiliar area.

Hatchlings and nestlings are helpless little baby birds. They need constant care from their parents.

So why do baby birds chirp at night?

Like a human baby would cry, baby birds will chirp to tell their parents they need caring for.

With more mouths to feed parent birds spend most of their time out of the nest foraging for food. These chirps let the parents know they need to be back at the nest.

These chirps might mean the nestlings are hungry, thirsty, cold, scared, excited, or sick.

Birds will often chirp or sing because they are perfecting their bird calls.

Nocturnal baby birds will try to mimic songs or chirps they hear from their parents. This will help them to communicate with other birds.

Practicing their singing and chirping is an important social skill for birds. Learning to sign is vital to their survival.

Have you ever seen a large flock of birds gathering and start to chirp together?

It’s thought that birds do this behavior as a kind of bird census.

When gathered, the volume of noise gives the flock an idea of their population numbers. With this knowledge get an idea of how easy or difficult it will be to compete for resources such as food and water.

Top 6 birds that chirp at night

Owls are the most famous nocturnal birds, so it’s no surprise that the Barred owl made the top 6 list.

You’re thinking that owls are more known for their hooting noises.

Well, the barred owl is one of the most vocal around. They can display up to 12 different calls. This includes chirps, whistles, scream, sirens, and wails.

Barred owls pair up during the breeding season and sing to each other.

Whip poor Wills are nocturnal birds that camouflage themselves well.

You may not be able to see them but you sure will hear them.

In fact, their name comes from their chirp. The sounds are like they are chanting ‘whip-poor-will’ repeatedly.

Male whip poor wills can repeat this chirp for hours during the breeding season.

Mockingbirds are prolific singers. They will take any opportunity to show off their songs.

If you’ve ever heard a constant stream of a different bird call in your yard, it’s most likely a mockingbird.

The males can learn over 200 songs in their lifetime.

Mockingbirds are also known to sing more when there is a full moon.

During spring breeding season, Yellow-breasted chats are one of the main birds you’ll hear chirping at night.

It’s unlikely you’ll hear them the rest of the year as they tend to migrate to South America for winter.

Their bird song is a strange mix of chirps, cackles, clucks, whistles, and hoots so it’s not one you’ll easily miss.

Hermit thrush have a melancholic whistle like bird call which you’ll hear most of the year-round.

You’ll catch Hermit thrush singing in the wee hours of the night in early spring and late fall.

Male hermit thrush will use a variety of songs which can make it difficult for you to identify by their chirps.

Robins are one of the birds most affected by human life in city areas.

Artificial street lighting easily disorientates robins and causes them to sing at night.

Studies[1] have found that traffic noise during the day disorientates robins. They adapt to this by singing at night when it’s more peaceful.

A Robin’s cheery chirp is quite distinct and easy to recognize.

This article has shown you 9 reasons to your question ‘why do birds chirp at night?’

The simple answer is to communicate.

After the sun sets these chirps are likely nocturnal birds trying to communicate with each other.

This may be to protect territory, signal danger, seek a mate, learn new skills or interact with the flock.

We’ve looked at the most common birds that make noise at night.

So next time those chirps are keeping you awake, you’ll have a better understanding of the birds in your area.

Let me know in the comments below which birds you’ve seen or heard chirping at night.

14 thoughts on “Why Do Birds Chirp at night?”