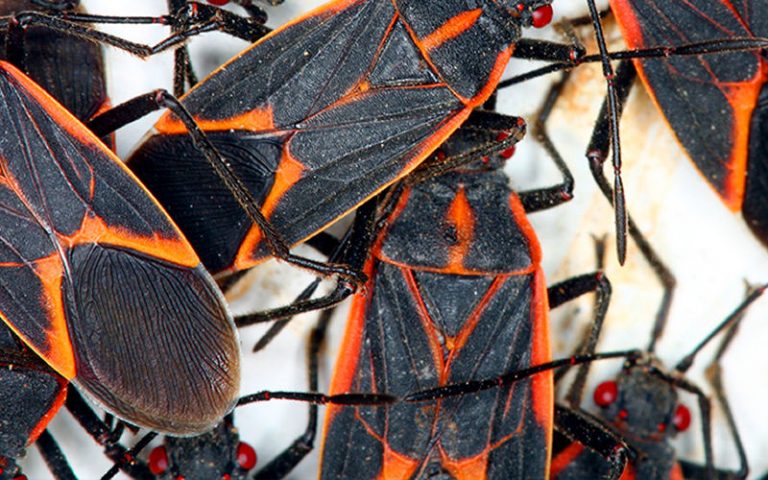 Do boxelder bugs bite? That’s a great question to ask if you’ve just stumbled across some in your yard or even your home.

Boxelder bugs can bite. They do not bite using teeth, however, they can cause injury to your skin by piercing with their mouth. This puncturing action can be painful, draw blood and cause irritation. Boxelder bugs are generally harmless and will only attempt to injure you if they feel threatened.

So you’re maybe wondering if there is anything about a boxelder bug that you should be concerned about. Perhaps even if they are safe to have around children or pets. This guide will take you through everything you need to know about how dangerous boxelder bugs are.

Sound good? Then let’s get started

Boxelder bugs, also known as elder bugs or maple bugs, are ‘true bugs’. This means that they have a special mouth for feeding called a proboscis.

A boxelders bugs proboscis is like a long extending tongue. You’ll be familiar with seeing a proboscis on a mosquito or a hummingbird. These tongues are designed to piece through a plant and suck out the tasty sap or nectar inside.

The Boxelder bugs proboscis is quite delicate and is intended to be used of soft plans and not animal skin. Box elders are not looking to bite you or your pets.

A boxelder bug may puncture your skin with their proboscis if they are feeling threatened in any way. This is a defense mechanism to protect themselves from harm.

If a boxelder bug does happen to injure you then it will look like a mosquito bite. The affected area will look like a small red dot on your skin, rather than a cluster of bites.  You may also notice the skin has a little bump where there is a tiny area of swelling. This is normal for any type of minor skin injury.

As the area starts to heal you’ll probably notice the affected area becomes very itchy. This is just your bodies way of healing and protecting you from any disease that may get into the broken skin.

What to do if a boxelder bug bites

On the rare occasion that a boxelder bug pierces your skin, you do not need to seek emergency help. You can treat the ‘bite‘ at home.

A boxelder bug is not venomous or poisonous. The area may draw blood and is likely to be slightly sore and itchy for a few days.

Boxelder bugs are not known to transmit disease. It’s always good practice to care for any injury you get from an insect to prevent infection. These are the steps you should follow if you are injured by a boxelder bug

Boxelder bugs are not harmful to humans, they are more of a nuisance bug. Although a boxelder bug may injure you they will only do this in self-defense or if they feel threatened in any way.

You may find a boxelder bug causes a tickling or uncomfortable sensation as they crawl on your skin. This is not harmful and is only a mild sensation.

One thing about boxelder bugs that frightens people is that they do tend to swarm at times. This can be scary and make you feel like you’re being attacked. A swarm of boxelder bugs is not dangerous in any way. They are simply looking for a warm place to settle.

Can Boxelder Bugs Pinch you?

A boxelder bug cannot pinch you as they have no pincher part on their body. The piercing action they may with their mouth can feel like a pinch. In the rare instance, you are injured by a boxelder bug, this will be by them puncturing your skin rather than piercing the skin.

Boxelder bugs do not have a stinger part on their body. If a boxelder bug does puncture your skin it will feel similar to a sting, as the skin is broken. A boxelder bug ‘bite’ does not deliver any type of venom that you may be allergic to.

One thing you’ll notice about boxelder bugs is their distinctive poop. Boxelder bug poop is bright orange or red.

The good news is that the boxelder poop is not harmful.

The worst part is that boxelder bug poop stains really easily. It will leave small brown or yellow stains wherever it lands, even after you clean it up.

That’s because their poop is designed to be really smelly to deter other animals from killing them. You don’t want to go around killing box elder bugs in your home as it stinks and will stain valuable clothes and furnishings.

Are boxelder bugs dangerous to pets?

Boxelder bugs are not dangerous for pets such as dogs or cats. And just like humans, a boxelder bug will not ‘bite’ a pet unless they feel threatened.

The risk with pets is that they may attempt to eat a boxelder bug. Cats and dogs both like to eat insects as they play around in the yard. Boxelder bugs can be particularly annoying for them, especially in swarms.

So don’t be surprised if you see your pet eating a boxelder bug.

The problem is that the boxelder bugs have extremely foul-tasting and smelling poop. And that’s all released when you or a pet squishes them. The purpose of the foul smell and taste is to discourage animals from wanting to eat more. It’s usually quite effective and your pet will stop after eating one.

If your dog or a cat eats a boxelder bug they may start to drool a lot or may even start to vomit. The boxelder bug hasn’t poisoned your pet but they’ll be trying to get rid of the foul taste.

You shouldn’t need a trip to the vet. But, do watch your pet over the next few hours as excessive vomiting can cause dehydration.

Boxelder bugs are not poisonous and don’t make any kind of venom that is harmful to humans or pets.

The problem is that boxelder bugs eat a lot of plant material. If gardeners are using chemical insecticides the box elder bugs may build up a level of chemicals in their bodies.

If your pet eats one of these boxelder bugs it won’t kill them. However, your pet may get digestive upset due to the pesticides. This is only likely to happen if your pet eats a lot of box elders bugs at once.

The good news is that due to the stink that boxelder bugs make, your pet is unlikely to eat enough to get to this stage. Your pet is more likely to be sick straight away to get the horrible taste out of their mouth.

Try to keep your pets from eating dead boxelder beetles as they will still contain the pesticide chemicals.

Now you know that boxelder bugs are generally harmless, but nuisance insects. It’s unlikely they’ll bite you, but might try to if you threaten them.

Try to keep your pets from eating boxelder bugs as it may cause them to vomit or end up in digestive discomfort.

3 thoughts on “Do Boxelder Bugs Bite? {How Dangerous are they?}”