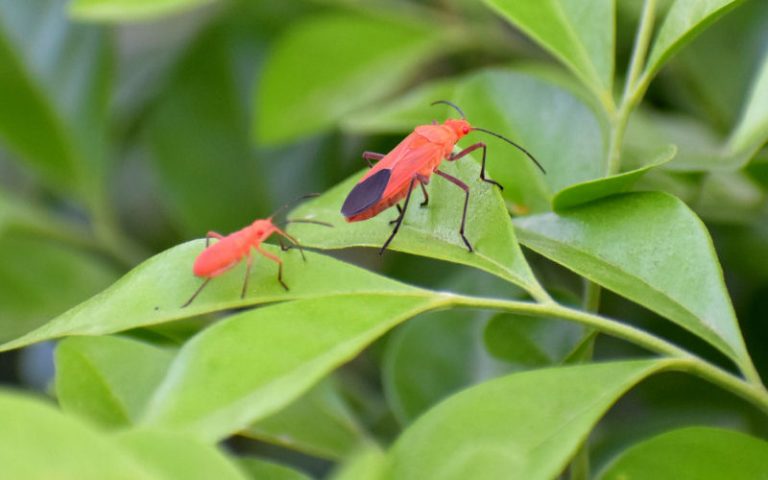 Box elder bugs are large insects that are black with orange markings. You may also know them as elder bugs or maple bugs. You’ll find them in your yard hanging around yard and maybe even in your home. Boxelder bug can be a nuisance bug that you want to deter. So you may be wondering what attracts boxelder bugs?

You may also wonder if there’s anything else that attract boxelder bugs to your yard. Perhaps you want to know what boxelder bugs they like to eat, where they prefer to live and what their habits they can get up to in your yard. With this information up your sleeve you can use this to deter them or learn more about them.

To learn more about what attracts boxelder bugs to you yard keep reading.

There are lots of things that attract box elder bugs to your yard. But the main reasons are always the most basic for survival. We’re talking food, shelter and mates.

Let’s have a look at each one.

Food is the main priority for boxelder bugs. They’ll be attracted to your yard if you have the food they like to eat. Food will give them energy to do other things like flying around and mating.

So, what do boxelder bugs eat?

Box elder bugs feed on the sap, nectar and liquids of trees and plants in your yard. They’ll get the sap from the twigs, leaves and seeds.

Other trees which attract box elder bugs are

Boxelder will mainly only feed on these trees rather than living on them. If you are looking to permanently remove boxelder bugs then you need to consider removing these trees.  I recommend you replace them with another non-seedbearing tree

Where do Boxelder Bugs live?

You’ll find that wherever box elder tress grow, there will be boxelder bugs.

Boxelder is found in mostly eastern and northern states in the USA.

The boxelder bug live on the surface of trees. They have everything they need on the tress as they feed on the sap then lay they eggs in the trunk and leaves. That way when the eggs hatch the baby’s have an instant food source.

Home which are tall and get a lot of sun are attractive to boxelder bugs. The good news is that in the summer they’ll want to stay outdoors.

In the winter when he weather get colder they are looking for somewhere warm and cosy to hibernate. They’ll start to look for safe, sheltered places such as the nooks and crannies of your home.

If you home has a southern or wester exposure, you’re more likely to have box bugs hibernating over winter.

The best way to keep them out of your home is to seal up any cracks in the outside of your home, especially the sunniest facing walls.

Box elder bugs love the light and warmth.  If you have any part of your yard which get a lot of sunlight or reflection then the boxelder will be all other that. Think porches, windows and walls.

Boxelders start to emerge in spring as the weather start to get warmer and the sun is out. The change in weather awakens them from their winter hibernation.

If you want to deter the box elders form these warm and sunny spots then you’ll need to cast some shade. Just remember as soon as you do the boxelder bugs will just move to the point where the sunlight falls.

Finding food is the only thing more important to boxelder bugs than the warmth.

You’ll likely see large swarms of box elder bugs sunning themselves after a bout of cold, rainy or windy weather in the summer.

Boxelder bugs are attracted to other boxelder bugs. That because they start to seek out other box elder bugs by releasing a pheromone to alert them to where the rest of them are.

Having other Boxelder bugs around means that they have safety in number, a good food source and plenty of bugs to mate with. Before you know it a few boxelder bugs turn into swarms of them.

Having so many boxelder bugs together helps to keep them in the warm state that they love.

How do you keep box elder bugs way?

As boxelder bugs are here for the food, then removing the offending tree is the most obvious solution. However it’s likely that that the cheapest or most practical solution you want. So let’s look at a few ways you can keep the boxelder bugs from annoying you over summer.

By removing an easy source of food such as seeds and leaves, the boxelder bugs will find it harder to get an easy food source from your nearby tree.

You may find that regular tree maintenance will cause most boxelder bugs to move onto another nearby tree in the neighbourhood.

Boxelder seeds on your lawn is like having a big advertising board in your yard for the bugs to visit. If you regularly mow your lawn your scoop up all these excess seeds and remove the easy food source from the boxelder bugs.

3. Vacuum the bugs up

If you want to remove a large swarm of boxelder bugs quickly then you can vacuum them up. A bag less, wet-dry vacuum is best for this. Had a bit of warm soapy water into the vacuum to kill the bugs off without causing a stink or releasing the pheromone.

4. Bring out the hose

You may have some success with blasting the box elder bugs with a hose to simply disperse them. It’s likely they’ll come back, but it’s a human way to keep them away for a short period of time.

It’s always good to understand that boxelder bugs are only around for a few short months of the year. As the weather starts to cool down the boxelder bugs are off to find somewhere warm for winter. If you can put up with them for a few months then you don’t have to worry about seeing them over the autumn or winter months.

What Not To Do

There are a few things you shouldn’t do to get rid of box elder bugs.

It’s best not to try and kill boxelder bug by squashing them.  If you do squash a boxelder bug they release there faecal matter which smell pungent. But more than that they also release that pheromone talked about before. So killing them will actually attract more in the long run.

If you try to kill a boxelder bug in your hand you may risk them trying to bite in self-defence. This can cause you irritation for a few day or even lead to infection if you don’t care for it properly.

You may even cause damage to your yard or furnishing by squashing a boxelder bug. They happen to leave bad stains for the liquids they release, so any clothing, furniture or outdoor décor may be ruined by killing the boxelder bug.

If you have trouble with insects then of course you may automatically think that pesticides are the best way to get rid of them.

The issue with this is that by using pesticides you’re putting other animals such as pets or wild birds at risk. That’s because insects will crawl all over the plants spreading the chemicals that the other animals will come In contact with.

Plus is a bird or a pet eats and insect with insecticide into its system them it can cause them a lot of harm. A wild bird may die or your pet may become sick with vomiting or diarrhoea.

Ok so now you know that boxelder bugs are attracted to foods, shelter and other boxelder bugs. IF they are a nuisance for you during the summer you can try some of our tips to get rid of them safely. Try to be mindful of other animals in your yard and keep them safe too.