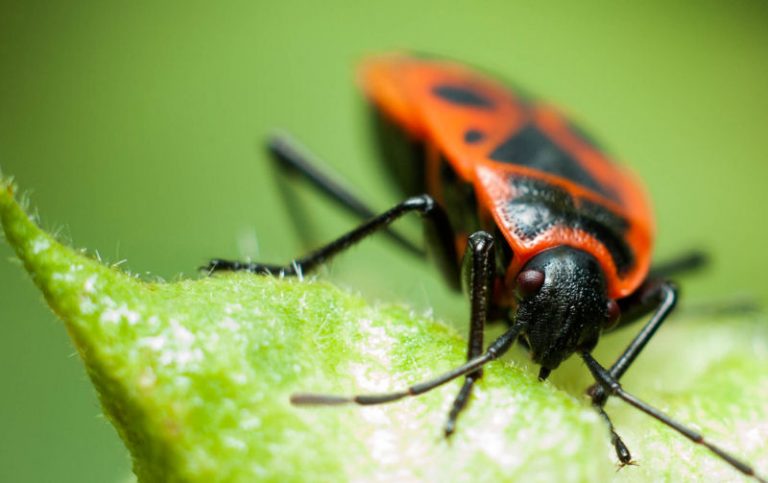 Swarms of black and orange boxelders bugs are everywhere in the summer and fall months. With so many around you’re probably wondering if there is some type of food that’s attracting them to your yard. But what do boxelder bugs eat?

Boxelder bugs eat sap and juices from trees, leaves, and seeds. Seed-bearing trees such as boxelder, ash, and silver maple trees are their favorite. Boxelder bugs will sometimes feed on the juice of fruits and vegetable foliage. Boxelder bugs do not eat in the winter months as they are in a state of hibernation.

What Do Boxelder Bugs Eat?

Boxelder bugs are sap-feeding insects. That means their diet consists of only the sap and liquids in plants, foliage, and fruits. The boxelder bugs do not eat the actual plant itself.

Boxelder bugs get their name from the fact that they have a preference for the boxelder tree. They are attracted to seed-bearing trees, which can provide a lot of food for swarms of box elder bugs.

The boxelder bugs will lay their eggs on the boxelder trees. This means when they hatch, the baby boxelder nymphs have a rich food source.

You may see boxelder bugs on other trees such as ash, elder, or fruit trees. However, they cannot complete a life cycle on these trees. That means they will always need a boxelder or maple tree close by.

How do boxelder bugs feed?

Boxelder bugs have a proboscis which is a long sucker-like mouth you see on mosquitos.

Their mouth will only pierce through the surface of plants, fruit, or seeds. Then suck the sap or liquids inside. Think of it like you would drink out of a juice pouch, pierce with the straw, then drink.

The sap is full of sugary nutrients and water that the boxelder bugs need to fly around, mate and lay eggs.

Boxelder bugs do not have any type of chewing mouth, stinger, or pincers which they use to feed on other smaller insects. Their mouths can only pierce and drink sap and liquids.

Boxelder bugs do not eat any insects, including:

A boxelder bug will only bite another insect or animal if they are under threat. This is a piercing action in self-defense to hurt the predator.

Other bugs will prey on boxelder bugs to eat them. As a method of protection, the boxelder bugs release a pungent odor and vile taste. This happens once dead to ward off other animals from eating more.

As boxelder bugs snack on plant foliage, they may be considered pest bugs. Yet, even in swarms, boxelder bugs usually do very little damage to plants.

The boxelder bugs don’t eat the actual plant itself, only the liquids inside. At most, they may cause a bit of superficial discoloration, leaf curling, or bruising.

That means that boxelder bugs are of little concern to gardeners and won’t destroy any crops or plants.

You may see boxelder bugs on fruit. They are not eating the fruit flesh but only the fruit juices inside.

You’re likely to see boxelder bugs on softer fruits such as:

The boxelder bugs will leave a surface level of damage on the fruit. If you look at the fruit skin closely, it will have tiny holes. This is where the boxelder bug has pierced its mouth through the surface.

Another issue is that boxelder bugs can cause an early fruit drop by dehydrating the plants and fruits. This is more likely to happen if you have a large swarm of boxelder bugs feeding on your fruit trees.

Boxelder bugs may not feed on the fruit but more so on the leaf foliage. This is more common with soft fruits such as strawberries or tomatoes.

Boxelder bugs prefer sweet liquids like sap, they are not known to eat vegetables. However, you may find them on the foliage of your vegetable plants. It’s likely the enjoying the plant leaves rather than the vegetable itself.  Boxelder bugs also love sunny places, so they may just be resting in a warm sunny area.

You may find boxelder bugs on the leaves of sun-loving vegetable plants such as:

Boxelder bugs don’t eat flowers. However, they may try to drink nectar from nectar-producing flowers. This would only normally happen if the food was scarce for the boxelders bugs.

They try to avoid this by keeping close to the trees they like to feed on.

What do boxelder bugs eat in winter?

Boxelder bugs go into a state of hibernation over winter. That means they don’t eat anything over the winter months.

Insect hibernation means that the boxelder bugs do into a dormant state. This means a complete shut down of their body so it can survive without energy.

During this time, boxelder bugs will try to hide in a warm, safe shelter place in foliage, homes, and under rocks.

What do boxelder bugs drink?

Boxelder bugs will get hydration from drinking the liquids they suck out of the plants. They do not need to find extra sources of fresh water.

The liquids which boxelder bugs get from plants are full of nutrients. This helps them survive and thrive.

What do Box Elder bugs eat in my home?

You may find a boxelder bug in your home over winter. They will be in a state of hibernation and will not be eating anything.

Suppose you find a boxelder bug in your home over the summer. Don’t worry. Boxelder bugs are not destructive to your property. It probably stumbled onto your property by accident. But more likely looking for a place to keep warm or hibernate for the winter.

Boxelder bugs will not be eating your clothes or any wood in your home. They simply don’t have the correct mouths to eat these materials.

What do boxelder bugs hate?

There are a few plants you can use in your yard to deter boxelder bugs from tying the feed or even rest there.

The most effective plants to use are:

These plants most likely won’t stop them from coming altogether. But, they will make it uncomfortable for the boxelder bugs to stick around. Boxelder bugs are not so bad in small numbers, but large swarms are what people find most of a nuisance. If you grow these plants near areas near a boxelder bug food source, it may help to reduce the swarms.

You’ll see that boxelder bogs are mainly sap eaters. This means they’ll only at the liquids from trees, plants, leaves, and fruits.

Despite them eating in large numbers, they don’t do much damage to plants, fruits, or vegetables in your yards. That means if you’re a keen gardener, you won’t need to worry about them destroying your displays or crops.

If you have a boxelder, maple, or ash tree nearby, you’ll likely see a lot of boxelder bugs in summer and fall. You can try to deter large swarms by planting lavender, clove, or sage to keep their numbers down.

10 thoughts on “What Do Boxelder Bugs Eat? {Do They Cause Damage?}”