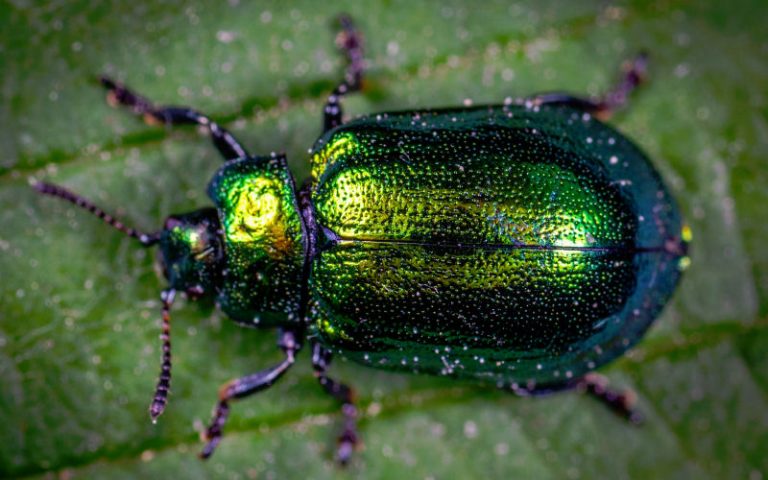 June bugs or Green June bugs are everywhere in the summers. There is just no getting away from them. Because there are so many around, you may be wondering, do June bugs bite?

June bugs can bite. They have a mouth shape that allows them to eat by gnawing and chewing on leaves. Adult June bugs will not use their mouths to bite humans or animals. June bug larvae may attempt to bite you as they are very destructive at this stage. June bugs are generally harmless and will only hiss or jump on you if they feel threatened.

So you’re maybe wondering if there is anything about June bugs that you should be concerned about. Perhaps even if they are safe to have around children or pets. This guide will take you through everything you need to know about how dangerous June bugs are.

Sound good? Then let’s get going.

June bugs (Cotinis nitida) are also known as June beetles or green June bugs.  These are common beetles found in the USA from the Scarabaeidae family. These beetles get their name from the large numbers of adults flying around in the month of June.

June bugs eat leaves, plants, and vegetation. To do this they have a mouth known as a mandible. This type of mouth allows the June bug to hold the food, cut it into small pieces and chew.

That means that June bugs do have the ability to bite. The good news is that adult June bugs are not aggressive. On the very rare occasion, they did bite it would likely be in self-defense and a very small nip.

June bug larvae are quite destructive as they need a lot of food to grow quickly. Due to this, they can be a ‘bite happy’ at this stage. June bug larvae don’t bite intentionally, it’s simply a natural reaction to them wanting to eat. Just like a human baby who bites on everything as they are learning to eat.

A June bug bite will not have a distinct look. It may appear like one small red area on your skin. This area may have a tiny bit of swelling. You may also find the skin is itchy or irritated. That feeling is due to your skin trying to heal, rather than anything the June bug has done to you.

What to do if a June bug bites

On the very rare occasion a June bug does bite, you don’t need to attend the emergency room. There are simple ways you can treat this very minor injury at home.

A June bug bite will feel like a small sharp nip. It’s unlikely you’ll need any type of medication to help ease the pain.

Keeping the area clean not itching it for a few days will prevent you from getting an infection in the area where the skin is broken.

Are June bugs harmful to humans?

June bugs are not harmful to humans. At most, they are annoying insects.

June bugs may sound harmful as they can jump on you and start to hiss when they feel threatened. Often this is their own doing from flying into your hair or objects near you. This hissing noise can be quite threatening if you’re afraid of bugs or too young children.

June bugs may also feel prickly as they walk on your skin. That’s because they have small spikes on their legs which helps them to grip. These spikes do not stab you in away way, but they may feel uncomfortable.

A confused June bug can also get a bit frantic and start to flail around, this is normal and they won’t try to hurt you as they do this. Just give them time to sort themselves out and they’ll soon fly off. This frantic behavior can be quite scary if you don’t like bugs flying near you, as it may seem like they are attacking.

Can June Bugs Pinch you?

June bugs don’t pinch people. They have the ability to pinch, but they use this action for holding leaves as they eat and not to attack.

If you feel a pinch when a June bug lands on you, it’s likely to be the gripping hairs they have on their legs. These spikes are not strong enough the pierce your skin.

Why do June bugs hiss?

June bugs make a small hissing noise if they are frightened or disturbed. This sound can be quite scary. However, it’s not dangerous in any way. This is simply a defensive noise but it poses no risk to humans.

The noise isn’t made from their mouths but actually from their wings. They push the air out between their wings and as the air is forced out it makes a noise.

Do June bugs attack you?

June bugs do not intentionally attack you. However, if you find yourself in amongst a swarm of June beetles it may seem like they are attacking you.

June bugs fly around in a large swarm of hundreds of beetles. They are slow and clumsy and don’t have any pattern to their flight path or buzzing around. The uncoordinated flying behavior will cause the June bugs to fly into your body and hair.

If the June bugs touch you or get tangled in your hair or clothes they will squeal and hiss until they are free. They will not try to bite you.

You may find June bugs will appear to ‘attack’ you if you are near something they like. This will usually be another June bug, food, or light. They are not trying to attack you, it’s just that you’re in their way.

Are June bugs dangerous to pets?

June bugs will not bite your pets. You may hear the June bugs hissing and squealing near them, but it’s more than likely they just feel disturbed.

Pets are much more likely to try and attack or eat the June bugs. That means the June bugs will feel threatened and irritated around your cat or dog.

Cats are hunters and are likely to chase June bugs around your yard.

Don’t worry, June bugs are not harmful to your cat in any way. If your cat does happy to eat a June bug it won’t do them any harm.

A June bug won’t injure your cat as they play around them. Plus June bugs are non-toxic so eating one or two won’t be dangerous to your cat.

Dogs are much more likely to want to eat June bugs as they will find large swarms annoying.

Just like cats, the June bug won’t try to bite, pinch or sting your Dog. At most, they’ll hiss and squeal.

Your dog may be successful in eating quite a lot of June bugs if they are open-mouthed in amongst a swarm.

The June bugs aren’t toxic or poisonous. But eating large amounts of insects may cause your dog to have a bit of digestive upset. At most your dog may have a bit of diarrhea or vomiting after eating a lot of June bugs.

Just watch your dog for any signs of dehydration if they are sick for a short period after eating June bugs.

June bugs themselves are not poisonous and don’t make any kind of venom that is harmful to humans or pets.

Yet June bugs can be poisonous if they’ve come into contact with pesticides or insecticides.

Gardeners can use these pesticides to keep bugs off their plants and crops. The chemicals can stay in the soil and on the plants and be eaten by the June bugs.

June bugs can build a resistance to some insecticides, but they can stay stored in their body.

When animals such as pets or wild birds eat these insects these chemicals will be ingested by them. For larger pets, this won’t be an issue. At most, it will cause digestive upset.

The bad news is that these chemicals may just be enough to harm smaller wild birds. In fact, insecticides kill millions of birds every year.

Should I kill June bugs?

No Don’t Kill Them

June bugs have a really important part to play in your yard ecosystem.

They are a good food source for birds and wildlife. June bugs provide a great source of protein for young birds. This helps local bird species to thrive and survive.

If you want to watch wildlife in your yard, then June bugs are a great food source that will attract them.

Another issue is that when you start using pesticides you are harming other wildlife. The chemicals in insecticides can accumulate internally. Then other animals and birds will ingest them when they eat the June bugs.

Trust Mother Nature to allow the birds and animals to naturally control the June bugs in your yard.

Remember you can just wait it out as the adult June bugs start to die off in the late summer and early fall months.

Yes Do Kill Them

Swarms of June bugs can be a huge nuisance, especially if you’re a keen gardener.

June bug grubs can do a lot of damage to grass, crops, and flowers. If you like to grow roses, then June bugs love to attack their roots.

Adult June bugs don’t cause much damage. However, the grubs that feed underground are hugely destructive. They want to eat all the time to help them grow quickly.

June bug larvae stay underground for around 2 years before they become adults. They can cause a lot of damage in that time.

Then the more adult June bugs that are around, the more eggs they will lay underground.

If you do decide that getting rid of the June bugs it’s the best thing to do, then I recommend using natural methods.

Chemical insecticides are harmful to the wildlife in your local area. That’s because the chemicals spread through the food chain.

Try to attract birds and wildlife that actually eat them. This helps to benefit everyone and keep your yard ecosystem in check.

Animals and bird that eat June bugs are:

If the infestations are too large you can use a biological spray. This one is the bestseller on Amazon and is non-toxic to humans, birds, or plants.

Yet, I’d be cautious of overusing this as you’ll be taking out a big protein supply for the local bird and wildlife.

Now you know that June bugs can bite, however they won’t bite you or your pets.

You don’t need to worry about them hurting you in any way. They are pretty clumsy and will at most hiss at you. The larvae June bugs are the most aggressive but only because they constantly want to eat and will try to chew anything that might be food.

Your pets won’t be at any harm from eating June bugs, but just monitor them for any signs of an upset stomach afterward.

They are pretty much nuisance insects however they are a good source of food for your local bird and wildlife. If you’re fed up with a large infestation try to attract birds that will kill them off. At the very most, use natural sprays to keep numbers down.

2 thoughts on “Do June Bugs Bite? {Should You be Worried By Swarms?}”