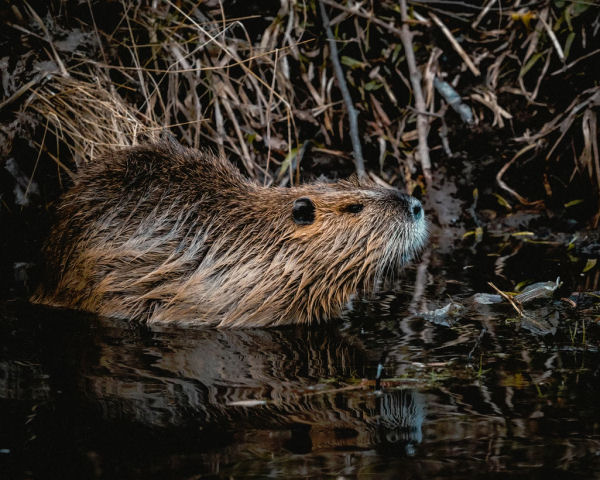 Beavers are clever creatures that build their life around their survival. Yet have you ever noticed how hard it is to tell how old a beaver is. So you may be wondering how long do beavers live?

The average life expectancy of a wild beaver is 8-10 years old. As adults beavers have around a 70-80% chance of survival. Several factors affect a beaver’s lifespan including their environment, health, predation, and food availability.

You may be quite surprised how long beavers can live in the wild. In fact, they survive as long as other much larger wild animals. This guide will take you through all you need to know about what impacts a beaver’s life. You’ll also learn how they adapt to prevent these issues.

How Long Do Beavers Live?

Wild beavers can live up to 15 years old in the wild, although most will live until around 8-10 years. Surprisingly unlike most animals, the average lifespan is quite high for a medium-size wild animal.

Like most wild animals, around 50% of beavers will die under the age of 1. Yet unlike other animals, the majority of this number is from baby beavers that die during pregnancy.

Young beaver kits have a surprisingly high survival rate once they are born. That’s because of how protected they are by the family unit. Their lodges provide a lot of protection from predators, which is often the main cause of death for young wild animals.

Adult beavers are resilient and survive extremely well. Yet old beavers start to become much more vulnerable and are at a greater risk of death.

Human activity poses the biggest threat to beaver survival. But let’s take a look at what other factors threaten how long a beaver will live in the wild.

What Affects a Beavers lifespan?

Beavers usually keep well resourced with food throughout the year. That’s because they will often keep food caches near their lodges when supplies are high. This survival technique allows them to have a continuous supply of food, even during winter.

A beaver’s diet consists of mainly aquatic plants and woody vegetation. They eat this as part of their diet all year round and don’t make seasonal adjustments to the type of food they eat.

As beavers build their lodges in a water source with nearby forests, they ensure they have the best access to these foods.

Winter weather can make it difficult to find fresh vegetation, and the quality of food eaten at this time of year is often poor. Beavers will overeat when food supplies are high in the warmer months. This helps them build a fat layer they can rely on for energy in winter.

Another threat to the volume of food a beaver can eat is competition in the area. This may be from other beavers or animals that eat a similar diet. Large animals such as deer, elk, and moose are a threat to the beavers’ food supply.

Beavers under the age of 2 remain reliant on their parents. If the parents are killed or relocated the young beavers are unlikely to survive without them.

For a wild animal, beaver numbers are not overly affected by predators. That’s because if beavers live in an established habitat, they have very few predators.

The reason for this is their use of water. First, their lodges are built with underwater entrances to stop any surprise invasions. This allows beavers to stay well protected in their lodges. This is part of the reason why baby beavers are so well protected from predators.

Second, is that beavers usually stay close to the water source and just in when a predator is nearby. Beavers are much more agile in the water than they are on land.  When beavers are on land, they are at much higher risk of being caught by larger animals.

Beavers are quite awkward when they are on land. This is due to their short, wide stature and semi webbed feet. This body shape makes them slow and unable to run fast on land.

Beavers are at greatest risk of being attacked by predators when the young beavers are dispersing. This is the time that they leave their parents’ lodge and try to set up on their own. They are much more vulnerable without their family unit.

Another risk factor for predation is when beavers are trapped and relocated. This makes them unfamiliar with the new territory and a target for nearby predators.

Humans are the biggest threat to beaver survival. In fact, beaver Eurasian beavers were almost made extinct in the early 1900s due to overhunting. To this day the number has not yet recovered, and there are currently only 500 beavers in Asia.

Modern-day law makes it illegal for beavers to be killed for their fur in most states. Although beavers can also be hunted as sport, hunting practice, meat, and trophies. Another popular reason for killing beavers is for their pest status.

Landowners often come across issues caused by beavers which make them a nuisance. Beavers can cause water droughts, flooding, habitat damage, and safety issues for landowners. They can be killed without a license if they are on your land, but one is required if beavers are killed on land not owned by the hunter.

There are some invasive species of beavers in South America and Finland. The governments in these areas encourage beaver hunts to keep the population numbers low and reduce their impact on local wildlife.

The general health of a beaver can have an impact on how long they survive. As wild animals, beavers can be subject to various diseases and parasites that can lead to poor health.

Beavers are quite resistant to most diseases that they contract. Yet tularaemia is the one water Bourne disease that can cause large numbers of beavers to die. The condition is highly infectious and can spread quickly amongst beaver colonies. It can be transmitted from touch, droplets, parasites, and contact with waste.

Beavers infected with the disease often become weak and disorientated. This makes them unable to forage for food or flee from predators. Uncontrolled diseases are likely to lead to multiple organ failure and death for the beaver.

An injury for a wild animal can often be fatal. An injured beaver is unlikely to be able to flee from predators or can contract a deadly infection.

Beavers create their habitats in both urban and rural areas. Yet the Urban bevers are at a much greater risk of injury. The most common injury is being hit by a car. This will often happen when beavers are crossing roads that run through forests.

A beaver is small enough to be killed immediately by a car. However, if they don’t die they will likely be left with internal injuries, broken bones, or open wounds which can eventually kill them.

Humans are also likely to cause injury to beavers when they are attempting to get rid of them. This may be from traps, gunshots, poisoning, or domestic dogs.

Struggles between beavers and predators can result in significant injuries. This can also happen when male beavers fight over territory.

Beavers can also cause a fatal or serious injury to themselves if they misjudge the fell of a tree. Often this can result in the beaver being crushed under the weight of the trunk as it lands.

Beavers rely heavily on the environment around them. Any changes that the beaver can’t control will have a big impact on their ability to survive. If the habitat is unsustainable they face the task of needing to find a new area to live in, which can be dangerous.

Humans can cause a lot of destruction to beaver habitats due to their pest status. Beaver lodges can be destroyed to make way for agriculture, housing, or recreational spaces.

Farmers and beavers are often in conflict due to the beaver’s impact on timbers and crops. Beavers can also cause flooding to both residential and commercial areas.

Issues with water flow such as severe drought or flooding can cause the beaver’s lodges to become uninhabitable. This usually only affects beavers living in recently constructed lodges.

How old do beavers live in captivity?

The oldest known beaver in captivity lived until it was 30 years old.

Beavers are not animals that are commonly held in captivity. This is because they are notorious for being poor exhibit animals. Beavers are nocturnal and won’t come out for daytime displays.

Other issues which occur with captive beavers include:

Beavers survive much better when they live in a nature reserve area. These are more common in Europe and Asia where they are trying to increase the population numbers.

Nature reserves reduce the chance of beavers being killed by hunters. They can also provide medical care for sick or injured beavers to improve their chance of survival.

The average age of a wild beaver is 8-10 years old. Beavers are excellent at controlling their environment to aid their survival.

The reason beavers can survive longer than wild animals of comparable size is due to their water habitat. This helps to keep predator numbers down and protect the young beavers.

The biggest threat to beavers is human interference from hunting or the destruction of their habitats. In fact, humans made beavers almost extinct at the turn of the 20th century.

Beavers offer lots of benefits to the ecosystem. The problems come when there are conflicts with humans. A balance needs to be made to allow the population to thrive without becoming pests on human land.