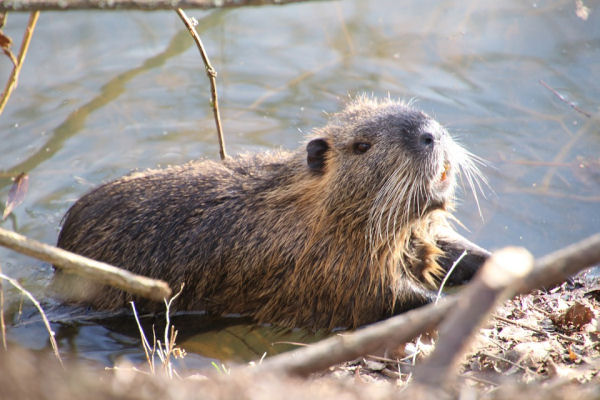 Toothy beavers are large but lovable rodents that are fascinating for wildlife watchers. If you’d love to catch a glimpse of a beaver in the wild, you may want to know where you’d be able to see them. So where do beavers live?

Beavers are semiaquatic animals that live in freshwater habitats of North America and Europe. They can be found in specific areas of South America and Asia. Beavers build specialist shelters known as lodges on, or at the side of rivers, ponds, lakes, and streams.

If you want to know about where beavers live then keep reading. This guide will take you through everything you know about the beaver’s habitat. We’ll also discuss where they live in the world and why they choose to live in these places.

Where do beavers build their home?

A lot of people think that beavers live in a dam, but they don’t. Beavers will build a special habitat, known as a lodge, near most freshwater sources. There are two different types of lodges that beavers build: conical and bank.

This is the type of beaver lodge that most people are familiar with. That’s because everyone knows that beavers love to build dams. Those dams are part of the conical lodge structure.

Bodies of freshwater have currents that keep the water constantly moving. If the water is always moving it’s more likely to make the beaver’s lodge unstable. Creating a dam allows the beavers to slow or stop the flow of the water around their lodge.

A dam also helps beavers to create pools of water that are deep enough to provide protection for the lodge. Think of a conical lodge as being like a beaver-made island in the water.

A conical lodge is easy to see as it look like a large pile of sticks, mud, and rocks, sticking out of the water. This type of lodge is preferable as the water surrounding the lodge gives the beavers extra protection from predators.

This type of beaver lodge is less well known. It gets its name from the fact that beavers create them at the edge of a riverbank. The beavers will burrow in the soil at the edge of the bank and create themselves a little cave.

Bank lodges are created in areas where the water is too fast flowing or too deep to build a conical lodge.

A bank lodge can be harder to spot, as it usually looks like debris washed at the side of the water.

Land predators have easier access to beavers in the type of lodge. Yet, just like the conical lodges, the beavers make the entrances only accessible by diving underwater. This means predators cannot easily raid them.

Why do beavers live in lodges?

A lodge is an amazing piece of engineering by beavers that is a crucial part of their survival. A well-built lodge can last for up to 30 years.

Let’s look at what features a lodge has to benefit the beavers.

The simplest feature of a lodge is that it provides cover for the beavers. The cover provides beavers with protection from predators and shelter from bad weather. A warm enclosed space is essential to keep baby beavers safe and protected when they are most vulnerable.

A part of beavers’ shelter strategy is utilizing water to minimize predator access to their lodge. The fact that the lodges are created in the middle of a pool or near fast-moving water is a deterrent in itself. Then on top of that, the beavers create entrances that are only accessible by diving underwater.

For extra protection, the beaver will create two access points which they can enter and exit. This allows them to go almost virtually undetected by an observant predator lurking nearby.

Lodges are built-in or near water so that beavers don’t have to travel long distances for food. A beaver’s diet mainly consists of aquatic plants and trees and vegetation.

Although beavers will travel to locate a good food source, they set up the lodges to remain close by. This means they don’t waste energy or risk predation by foraging too far.

Beaver lodges are even set up with an eating chamber, like their own little kitchen. There will likely be a food cache near the entrance of the lodge. This allows the beaver to have an area of stored food for when supply is low in the colder months.

Lodges are quite large structures, normally around 16ft (5m) wide and 6ft (2m) tall. This allows around 6-7 beavers to live together. Although larger lodges can provide a home for up to 12 beavers.

The beavers create a nesting area where they sleep together to share body heat. The baby beavers will be born here in the spring.

Where do beavers live during the day?

Beavers are nocturnal and crepuscular. This means they are mostly active during the night, but in daylight hours, they are active at dusk and dawn.

During the day beavers will spend their time resting in their lodges. They need this time to sleep and recover as they are actively foraging and building for around 12 hours overnight.

Being active at night allows beaver’s added protection from predators who can see better in daylight.

Where do beavers live in the world?

Beavers are rodents from the Castor family. There are two different species of beavers in the world: the North American Beaver and the Eurasian Beaver.

Let’s look at the range that each species covers.

It won’t be any surprise that the North American beaver (Castor canadensis) is a native to the northern hemisphere of the Americas.

Beavers cover pretty much most of Canada and mainland USA. The only areas they don’t cover are the arctic regions of Canada and the desert areas of California, Nevada, and parts of Utah and Arizona.

Although it’s not really a surprise that an animal that relies on water doesn’t live in a dry climate. Beavers are also not found in Hawaii or central and south Florida.

The beaver is so well known in Canada that it is their national animal. In the USA the beaver is the state animal of Oregon and New York.

As a native to the mainland USA, the North American beaver naturally covers a small range in northern Mexico. They live mainly around the freshwater areas near the Gulf of Mexico.

The North American beaver was also introduced to the Patagonian area of South America in the 1940s. The population is now around 100,000 beavers thriving in the area. They are now considered an invasive species due to the devastating effect of deforestation in their region.

Unfortunately, the trees don’t regenerate in this area as quickly as those in North America. This causes a lack of habitat for the native species. These beavers are seen as pests and hunting is heavily encouraged in the area to control species numbers.

The Eurasian Beaver (Castor fiber) is a beaver species native to Europe.

The species was nearly made extinct in the 1900s due to over-hunting for fur. Numbers have since increased and the Eurasian beaver is found over a large range of Europe.

In continental Europe, the beaver can be found in large numbers in:

They can also be found with a smaller sporadic population in most central European countries, and numbers continue to grow.

In addition to central Europe, a large number of beavers can be found in Scandinavia and have recently been reintroduced to Great Britain.

Finland has a small population of the Eurasian beaver. Yet they have an even larger population of the North American beaver. This expands into the Karelia region of Russia. The species were introduced to the area in the 1930s to replace the almost extinct native population.

The differences in species were not recognized at the time. Yet the two species cannot successfully breed, and so cannot coexist as they compete for the same resources.

Finland classifies the North American beaver as an invasive species. Because of this, they continue to make attempts to control population numbers.

Historically the Eurasian beaver was a native animal in large areas of Asia as well as Europe. Overexploitation has seen the extinction of the species over most of Asia.

Yet there remain some very small populations of beavers in the Bulgan River region at the border between China and Mongolia. Their numbers are so small that the species are classed as endangered and are state protected.

The Bulgan Gol Nature reserve has been protecting the small population since the 1980s. With their efforts, the beaver population in the area has risen to over 500 in 2020.

What Climate Do Beavers live in?

Beavers are animals that need to live in temperate climates. They adapt best to the areas with heavy rainfall throughout the year. Rainfall keeps water levels high and the forest area thriving. Beavers need to live near water sources with forests close by for shelter and food.

Beavers do not survive in dry climates, this is why you won’t find them in desert areas of the USA.

They are able to adapt to survive in subarctic climates, yet, they cannot survive in arctic regions.

The temperate climate of North America and Europe is ideal for the beaver species to survive.

Where do beavers live in winter?

Beavers don’t migrate or hibernate in the winter. They stay in the area they have built their lodge throughout winter.

The beaver will usually choose to build their lodge on a water source that is deep enough not to freeze through. The beavers are then able to swim under any surface ice to access their lodge.

Like many wild animals, beavers will grow a winter coat and put on a fat layer to survive through the colder months. There lodges house a few beavers to stay together in a colony. This allows them to huddle together in their sleep areas, sharing their body heat to keep warm.

Beavers are not seen much in winter as they reduce their activity. Yet they do remain active in the nearby waters and maintain their dams and lodges.

Do beavers live in dams?

Beavers don’t live in dams, yet it’s an important part of their habitat.

The beaver’s dam creates a barrier that helps an area of still, deep water to pool. They can then build a lodge within this area of pool water. The lodge is the den area where the beaver lives, not the dam.

Although the beaver doesn’t live in the dam itself, plenty of other wildlife do. These pools of water create the perfect habitat for insects, fish, birds, bats, amphibians, and crustaceans.

Beavers are amazing habitat engineers. They are highly skilled at building the perfect environment to survive. For that reason, they stay in areas of freshwater with forested areas nearby for food and construction materials.

The two main species of beaver you’ll find in the world. One is the North American beaver, found in Canada and the USA. The other is the Eurasian beaver found in continental Europe. This species is only just increasing its numbers due to near extinction from overhunting in the early 1900s.

The North American beaver has been introduced to some areas of South America and Finland, which has resulted in them having a pest status. Yet the low number of Eurasian beavers in Mongolia have them classed as endangered and protected.