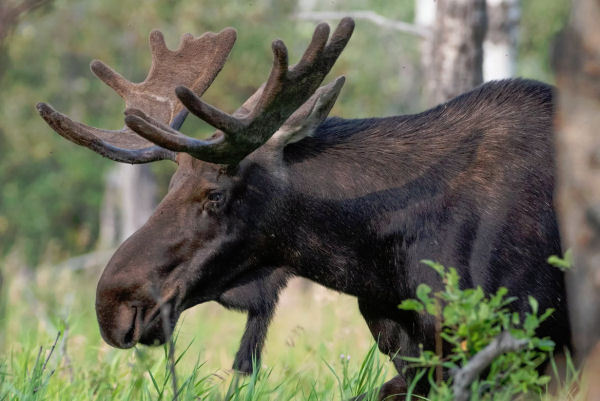 Moose are massive animals, so you might expect them to live for a long time. But have you noticed how difficult it is to tell how old a moose is? It’s probably left you wondering how long does a moose live?

A wild moose will live on average for 10-12 years.  Estimating the moose lifespan is difficult as moose don’t survive well in captivity. Around half of all moose will die within their first year of life. There are several factors that affect the lifespan of a moose. This includes their health, habitat, and predators.

Now you may be intrigued by the fact that some moose die very young, but others can live quite a long time. This guide will take you through everything you need to know about a moose’s lifespan. You’ll learn about the challenges that moose are up against to survive.

How long does a moose live in the wild?

Moose have one of the longest survival rates of the deer species. There are claims that moose can live up to 25 years old, but, there is no official record of this.

Yet, just because some moose can live that age, doesn’t mean that all moose will.  Unfortunately, 50% of moose die as infants. This is a time when they are more vulnerable to the harsh conditions in the wild.

Once moose reach adulthood they have a much better chance of survival. Moose are pretty resilient creatures, which is why they can survive longer than most deer species.

There are 8 recognized subspecies of moose that live in different parts of the world. Their survival rates may vary depending on their habitats and their interaction with humans.

Let’s look at the factors that affect how long a moose will survive in the wild.

Finding a suitable food source is a big threat to moose survival. Starvation is a major cause of death for a moose at any stage of life.

Moose are extremely large animals and need to eat a lot of food every day to remain active and healthy.

A moose’s diet consists mainly of twigs and aquatic vegetation. This is quite different from other deer species that will eat a variety of food. Yet moose have adapted to living in colder climates where fresh vegetation is harder to find.

For moose, the problem is that they need large volumes of food. They may need up to 60lbs of vegetation every day. If the moose population is too high in the area, then there is a lot less food to go around. This puts moose at greater risk of starving to death, especially in winter when natural food sources are scarce.

Moose will adapt to this by overeating in the spring, summer, and fall months when food is plentiful. This helps them to build an emergency fat supply that they can use for energy when there is no food in winter.

Desperate moose may turn to urban settings to find food sources. This can lead to them eating a diet nutritionally poor for them. It can also put them at greater risk of danger from interacting with humans.

Despite the fact that moose are huge, they remain prey for a few large, aggressive animals. So predation is a big threat to a moose’s survival.

That last one may be quite a surprise. Yet moose are excellent swimmers and spend a lot of time in the water to find good food sources. This makes them a great target for coastal orcas when they swim between islands off the coast of Northwest America.

Most moose caught by predators are usually under 6 months old. Wolves and coyotes find it much easier to kill a small moose rather than a full-grown adult bull. Large males have the extra protection of their sheer size, antlers, and hooves for protection. Other moose that are vulnerable to predators are elderly, sick, or injured.

Baby moose will often stay with their mother for protection until they reach around 18 months old. Female moose are fiercely protective of their calves and will often sustain injuries or die trying to protect them.

Moose also have to contend with human hunting. Due to their large size, moose are highly sought after by big game hunters. Moose are hunted in large numbers for trophies, sport, meat, and fur.

Moose can also be killed by humans as they can be considered as a danger, and to control their population numbers. In the USA and Canada, tens of thousands of moose are killed each year. And in Sweden, they are known to kill around 100,000 moose each year.

States are often required to adjust moose hunting permits depending on the numbers in the area. In the past, some annual hunts have been called off altogether when it’s been a harsh year for the local moose populations.

A moose’s general health will have a big impact on how long they survive. As wild animals, they are subject to various diseases and parasites that can lead to poor health and death. Parasites seem to be the biggest threat to moose populations.

These parasites are often fatal for moose. This is a result of symptoms including disorientation, hair loss, anemia, and weight loss. These all impact the moose’s ability to survive in hard winter by making them weak and unable to find food or fight off predators.

Moose are generally able to avoid most diseases that are common amongst deer herds. That’s because they generally remain solitary most of their lives. Although one disease that moose can contract is a debilitating condition known as Chronic Wasting Disease (CWD). This virus can be passed on to moose through contact with animals’ bodily fluids in soil or vegetation.

The environment that moose live in can make them much more susceptible to injuries. An injured moose is much more likely to die as they can’t flee from predators or can contract a deadly infection.

Moose that live near urban areas are at greater risk of injury than those in more rural locations. The most common injury that moose sustain is the result of vehicle collisions. This is because moose will often use clear roads or rail tracks to travel on in areas of heavy snow. This puts them at a greater risk of being hit by a car or train.

Only around 55% of moose die during a car collision. Yet those that survive are likely to be left with fatal internal injuries, broken bones, or open wounds.

Another human-caused injury moose can sustain is from gunshots or traps used to deter them, or other animals.

Moose can also be badly injured when they are escaping predators. Moose predators have sharp claws and jaws which will easily cause large wounds that can become infected.

Males rutting during the breeding can cause injury to the moose antlers, resulting in an early shed. Injury to the male’s testicles can result in deformed antlers which cause significant health issues.

Moose are quite susceptible to small changes in the climate. They have adapted to living in temperate and subarctic conditions. Ideally, they live in northern areas that have mild summers and cold winters.

Moose have adapted to survive in the freezing winter weather in these areas. Their warm coat, thick skin, and long legs allow them to navigate snowy conditions. Yet the problem with this is that they can’t survive warm conditions too well.

When the weather starts to warm up in spring and summer, the moose struggle with heat stress. Their large size makes it easy for them to overheat quickly. If they can’t cool down in the shade or water, they risk dying from overheating.

Hot weather also makes moose much more susceptible to contracting ticks. As we’ve already discussed, a lot of fatal diseases that moose contract are through parasites. The heat can also weaken their immune system, making them more vulnerable in the wild.

Climate change is having a big effect on moose populations due to their usual territories becoming warmer over the years.

How old do moose live in captivity?

Moose will live until around 6 years in captivity, although the oldest captive moose lived until 18 years old. That’s a lot less than wild moose. This is quite unusual for a captive animal who normally lives a lot longer than those in the wild.

Captive animals usually live longer as they are protected from a lot of the dangers they experience in the wild. They have no predators, a steady food supply, shelter, and access to health care if they get ill.

Yet, moose are not animals that are often held in captivity. That’s because captive moose often die prematurely due to the difficulty in providing a natural diet for them. Moose need access to large volumes of twigs and aquatic plants which isn’t easy to replicate in captivity.

Moose appear to be much more susceptible to disease when they are held in captivity. This is more than likely due to the warmer temperatures which allow ticks to thrive. Colder temperatures in the wild help to naturally reduce tick infestations for moose.

Most wild moose will survive for around 10-12 years, but almost half of the moose will die in their first year of life.

Infant moose will often become victims of predators such as wolves or coyotes.

Adult moose will need to survive from contracting deadly parasites, lack of food, and being killed off in the thousands by hunters every year. Humans also affect moose numbers due to vehicle collisions which can kill thousands of moose every year.

The danger is that moose don’t survive well in captivity, so to ensure the species survival their populations need to be maintained in the wild.