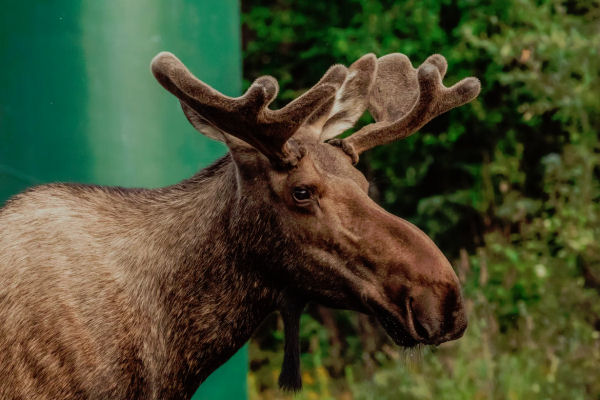 Moose are large, majestic animals that you may occasionally get the pleasure of seeing in your local area. But are moose only found in the USA? What you want to know is where do moose live?

Moose live in forest areas with nearby water sources in North America, Canada, Northern Europe, and Russia. Due to their large size moose prefer to live in cold climates. Moose stay near trees, meadows, and water for safety, shelter, and food.

If you want to know more about where Moose live in the wild then keep reading. This guide will take you through everything you need to know about moose habitat. You’ll also learn where they live in the world.

Where Do Moose Live?

Moose need a habitat that suits their daily habits. Knowing what a moose needs to survive will help you to understand why they choose the habitats they live in.

Although moose are large they are still prey for a lot of hungry predators. This means they need a habitat that provides them with cover to keep them protected from predators such as wolves and bears.

Evergreen forested areas help to provide cover for both adult and young moose. Trees provide shade which makes it harder for the moose to be detected against tree bark in low light conditions.

Moose often choose to rest in meadow areas. Tall grass hides them well in the distance as they rest on the ground.

A good food source is essential for moose to survive. Moose need a lot of food every day to keep them healthy. That means they want food that’s close without having to travel long distances.

Moose have a diet of mainly twigs and vegetation. Aquatic plants are a large part of the moose diet. This means they like to stay near a fresh water source for food.

Water is essential to moose to keep themselves cool in the summer months. Water can also provide moose with a place of safety to avoid nearby predators.

Moose are solitary animals and they don’t live in herds like other deer species. The only time they will live close to each other is during mating season. During this time moose can be seen in small groups of one male and several females.

Out with mating season moose will usually roam around forests and meadows. These areas provide enough space for a large moose to bed down to rest.

Where do moose live in the world?

Moose are native to Northern areas of the globe including North America, Europe, and Eurasia.

Let’s look at the moose range in each area.

There are 4 sub-species of moose that can be found in North America:

Moose will be found mostly all over Canada, Alaska, and in some northern states of mainland USA. Depending on the species they can be found as far down as Utah and Colorado in the west. The moose found this far into the USA were introduced to the area in the 1970s for hunting and tourism.

There are some areas of North America where you won’t find moose. As a general rule moose don’t live in the arctic areas of Canada or Alaska as the climate is too cold. They also don’t live on Vancouver Island. You can find them in Newfoundland as they were introduced to the island.

Moose can also be found in northern Europe, although they are often known as Elk (not to be confused with American elk). European moose are found in the northern mainland including Sweden, Norway, Finland, Poland, and Ukraine.

Small moose populations can be found in some European countries such as:

The moose population has reduced significantly in these areas due to human interference. Hunters kill off moose in large numbers and the small numbers left then find it harder to repopulate. Efforts are being made by wildlife conservationists to reintroduce moose in larger numbers.

The largest moose population in the world lives in Russia with around 1.3 million moose living there. There are 4 subspecies of moose known to live in Russia:

Just like the American moose, these subspecies all differ. Including the locations that they live in, and the physical characteristics they’ve made to survive in the local conditions. The largest moose found in Russia is the eastern Siberian species.

As the border of Russia meets the northern border of China, it’s only natural that some Moose will live there too. A small population of moose can be found in both Mongolia and Manchuria.

The small populations in these areas mean that moose have been classed as rare and protected in Mongolia. Just like in other areas of the world, moose hunting has had a devastating effect on population numbers.

Where Moose Live By Sub- Species

What Climate do Moose live in?

Moose live in the northern hemisphere in temperate or subpolar climates. They adapt well to the cold so moose prefer lower temperatures. Although they don’t like it too cold. Moose prefer a habitat with a layer of snow, however, deep snow slows them down.

When temperatures reach over 56°F (13°C) in summer and 23°F (-5°C) in winter the moose struggle with heat stress. That’s because moose have a warm thick coat and skin to retain heat.

Shade and water are used by moose to cool down as they are too large to cool themselves down quickly. For this reason, they will stay close to wet, woodland areas.

Humans have made attempts to introduce moose to several US States over the years with little success. This is due to the fluctuations in the climates that the moose cannot adapt well to and quickly die off.

Where do moose live in winter?

Moose don’t hibernate in winter, as they thrive within cold climates. Although moose can make a partial migration in the winter if the conditions get too cold.

Moose adapted well to the cold. Yet, they need to make a trade-off between having a food source and keeping safe from predators.

Cold weather conditions make it harder for plants to grow and water sources freeze over. Lack of land and underwater vegetation means that the moose may starve if they can’t eat enough each day.

Deep snowfall can also cause issues for Moose in winter. Moving through the snow can waste a lot of energy for a large moose. It also makes it particularly tricky for them to flee from nimble predators such as wolves.

Do Moose live in caves?

Moose don’t make dens in caves, however, they may take shelter during harsh winter weather. Caves can help moose to conserve heat for a period of time. Moose won’t stay in the caves long as they need to find food sources to keep up their energy.

Caves can also make the moose more vulnerable to predators who can back them into an enclosed space without any way to escape.

Moose are large animals that have adapted well to living in cold climates. They are native to North America, Alaska, Europe, Russia, and Asia. Moose prefer to live in forest areas with a nearby water source, but also live in mountainous and grassland environments.

Moose are solitary creatures who prefer to live alone. Humans have greatly affected their numbers all over the world due to hunting. Slowly moose are being reintroduced back to areas they previously thrived in before humans interfered. This has been a success to increase their numbers in lots of European countries.