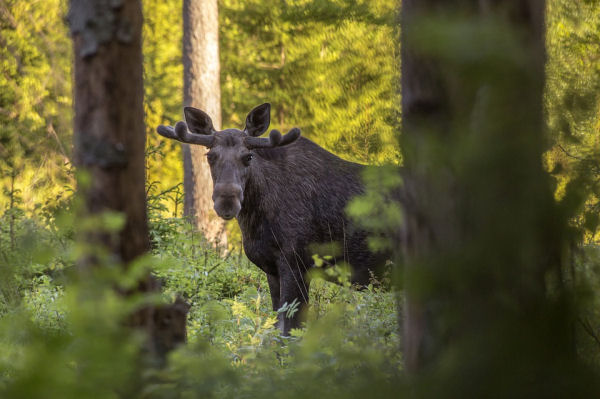 Moose are massive creatures, so it’s hard to believe that they have any predators in the wild. Yet, you’d be surprised to know that even moose need to be wary of other animals trying to eat them. So what animals are natural predators of moose?

Moose have a few natural predators including wolves, bears, cougars, and orcas. These animals are extremely large and strong or can attack the moose in packs. The sheer size, weight, and speed of a moose can offer some protection. Yet, they are solitary creatures living in landscapes which can make them vulnerable to carnivorous animals.

Now I know you’re intrigued by the fact that we’ve mentioned orcas as natural predators of a moose. So if you want to learn more about moose predators then keep reading.

Wolves are one of the largest predators of wild moose. Surprisingly, the moose depend on the wolves just as much.

This interdependent relationship between wolves and moose has been studied for a long time.  Since 1958, researchers have been observing the two species interacting on the secluded Isle Royale in Lake Superior.

The outcome of this long-term observational research has given an insight into how Moose make up a large part of the wolves’ diet. Yet, the wolves benefit the moose by keeping their populations in check.

Although population control doesn’t initially sound like a good thing, it can be. Uncontrolled moose numbers can lead to starvation, disease, and injury to nearby human populations. Wolves can naturally keep these in check.

Wolves are much more likely to attach a female moose or a calf. A large bull moose can be targeted but, it would need to be a large healthy pack to be successful. Fully grown bulls are more likely to be killed by wolves if they are injured, diseased, or old.

Wolves normally kill the moose by causing large open wounds to their rear areas. The aim is to cause massive blood loss which ultimately kills the moose. Wolves may also attack the moose by biting their nose and causing a state of paralysis.

Wolves can often stalk their target moose for miles and days on end. The moose can sometimes fight back by charging or stampeding at the wolves. Most of the time they will protect themselves by fleeing.

Wolf scent and evidence of previous kills will alert the moose that an area is not safe for them.

There are two types of bears that regularly attack and kill moose. Those are the grizzly brown bear and the American black bear.

The American black bears do not actively seek out moose to kill, as they are omnivores. Yet, they will eat them is given the opportunity to. This will mainly be young calves that are within their first few months of life. Black bears will also kill adult moose but they mainly attack females rather than males.

Brown bears are a predator of moose in North America, northern Europe, and Asia. Apart from wolves, they are the only other animal that is a predator to moose on all continents.

The brown bear usually kills moose by taking over a wolf kill in the final moments. Bears don’t have the same stamina that wolves do to chase and wear down a large moose.

The brown bear will also kill young moose by themselves as these are a much easier target.

Moose can use their antlers to fend off a surprise attack by a smaller bear. Yet the moose shed their antlers in late winter. This means they don’t always have antlers for protection, particularly in the early spring when bears come out of hibernation.

Bears and moose can both run at a full pace of around 35mph, so the moose need to keep their wits about them when they share the same range as brown bears.

There have been some accounts of polar bears killing moose. Yet these two species rarely cross paths in the same habitat.

Polar bears are amazing swimmers and have been known to drown moose who try to escape in water. Although these attacks are more likely opportunistic for a hungry polar bear than a regular occurrence.

A wolverine killing a moose can be quite surprising, considering the size difference between the two animals. Wolverines are predators of moose, yet they need the right conditions for a kill.

A wolverine can kill an adult moose. Yet, they need to be sick or injured in order for them to be weak enough for the wolverines to overpower them. Starvation and deep snow causing exhaustion can also help wolverines to kill vulnerable moose.

Wolverines are expertly skilled at attacking prey in deep winter environments. For a moose, the snow slows them down, and this works to the wolverine’s advantage.

Wolverines have extremely sharp claws, strong jaws, and powerful teeth which can cause the moose a lot of injury during a sustained attack.

Wolverines will often eat moose meat as carrion when they’ve been killed by other animals. This often leads wolverines to hang around a pack of wolves, waiting for them to take down a moose.

Hooved animals make up the large majority of the prey killed by cougars. If moose are in the same area they will also be preyed upon by cougars.

Both males and female cougars will kill moose. The female will mainly kill very young moose under one year old or those around 1-2 years old. Although this may be risky for them if they have a protective mother nearby.

Male cougars prefer to seek out moose to kill than any other hooved animal. In fact, moose can make up over 90% of a male cougars diet in the winter months in northern regions of Canada.

Cougars will only prey on adult moose which are in extremely poor condition. Studies have shown this through the investigation into the bone marrow of the moose who were prey for cougars in Alberta.

Cougars will recognize starving and weakened moose and usually kill them by ambush. The kill will generally come from the cougar leaping onto the moose’s back and delivering a powerful and crushing neck bite.

Tigers are not often known to be natural moose predators as it’s not well known that they do live in the same areas.

As the largest big cat species in the world, the Siberian tiger needs large prey to keep it well fed. Moose is just the perfect type of animal that Siberian tigers can prey upon.

Like many other predators, the Siberian tiger will often pick off the young, old, female, injured, or sick moose. A healthy adult bull moose can cause a lot of damage to a tiger through the use of its powerful legs or antlers.

A tiger will kill a moose by stalking them as they forage amongst vegetation. They will then pounce onto the moose’s throat, biting down with such force it suffocates them.

The problem for moose is that tigers are also great swimmers just like them. This means they use the waterways to attack the moose too.

The biggest single animal to kill moose on masse is humans. Hundreds of thousands of moose are killed every year by big-game hunters.

The main reason hunting permits are issued is part of moose population controls in most countries. Moose can be seen as a threat especially when they live near a human population and can cause death or serious injury.

Moose are also killed in huge numbers for meat, sport, fur, and trophies. The size of the kill makes them extremely popular targets in the world of big game hunting.

Moose hunting is popular in the USA, Canada, and Sweden. Alaska is the most popular US state with around 7000 moose being killed each year. Yet, Sweden is known to kill around 100,000 moose every year to control population sizes.

Obviously, a human cannot kill a moose by themselves, they need some kind of weapon. The most commonly used weapons of choice are rifles or bow and arrows.

Hunters usually kill moose by shooting them through the heart or both lungs.

This one can be quite a surprise as you don’t typically put moose and orcas in the same habitat.

Yet moose are excellent swimmers and will swim between islands in northern Canada and the bays of Alaska.

These deep water are also home to some local killer whales, who are looking for a meal. The moose are much slower in the water than they are on land.  The orcas will take advantage of this and will kill the moose as they swim.

Orcas are certainly large enough to take on a moose. And because the moose have little defense in the water, they are easy to kill.

This is no surprise as orcas are apex predators and will kill a huge variety of marine life. Orcas are carnivores and will only eat the meat of other animals.

Orcas can kill animals in many different ways including ramming, biting, and drowning. Carcasses of moose washed up on the shore have evidence of orca bites from its flesh.

So orcas don’t regularly hunt moose, however, they are opportunistic predators and will likely kill a moose if given the chance.

Moose are extremely large animals which makes them less likely to become prey for many animals in the wild. Despite having a lifespan of up to 25 years, they can fall victim to large carnivorous animals which actively seek out large prey.

Most of these animals are powerful enough to kill a moose with their jaws and claws. Others may use the power of a pack to attack in numbers.

Young, old, injured, and weakened moose are much more likely to fall victim to predators in the wild. Healthy adult bulls and cows are usually strong enough to defend themselves against most attacks.

Yet moose find themselves in a variety of habitats and environments which can open them up to even unlikely predators such as orcas.

These skilled predators use their powers of attack to hone in on the moose’s vulnerability and then they become a large and tasty meal.