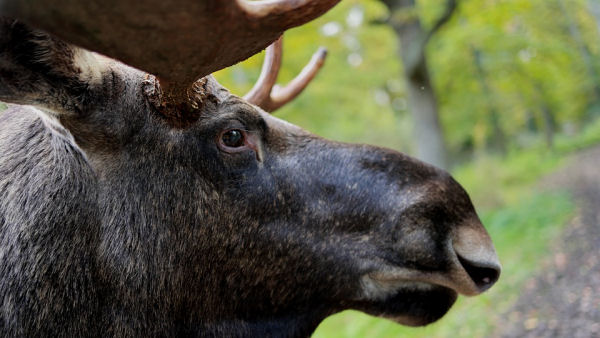 Moose are the largest member of the deer family and are well known for their distinctive antlers. Yet you may have seen some moose without antlers. So you’re probably wondering if moose antlers are permanent or do moose shed their antlers?

Male moose shed their antlers every year. Antler shedding usually happens each year in mid to late winter and starts to grow back again in early spring. Moose grow their antlers to improve their success in finding a mate during the breeding season. The antlers are not fixed to the moose’s skull and can easily separate from their head.

Moose antlers are an extremely interesting body part. So if you want to know more then keep reading. This guide will take you through the why, where, when, and how’s of moose shedding their antlers.

Sound good? Then let’s jump in.

Why do moose shed their antlers?

Moose shed their antlers due to seasonal changes and hormonal triggers, it’s a process officially known as antler casting.

Only male moose (bulls) make antlers as it’s a body part controlled by the testosterone hormone. These antlers have a variety of benefits for the males including:

These benefits help the males to show off their strength and protection to the females. Usually, large powerful antlers are a display to the females that their offspring will be healthy and strong like them.

Although there are a few downsides to carrying massive antlers around on your head. The biggest disadvantage is that the antlers are extremely bulky and heavy.

In fact, moose antlers can grow to around 75 inches wide and 70 lbs in weight.

Carrying that around on your head all day every day uses a lot of energy and effort to move around. Once the mating season is over the males don’t really need their antlers. So it only makes sense that shedding their antlers is much more beneficial than keeping them.

Shedding their antlers in wintertime also helps them to survive when food supplies are scarce and they need to conserve energy. Plus, it helps them to be much more nimble when trying to escape hungry predators in the snow.

How do moose shed their antlers?

Moose are able to shed their antlers once the testosterone hormone levels drop in their blood.

The antlers are dead bone tissue that is not bonded to the moose’s skull. Instead, it sits in a shaped area known as the pedicle. The antlers are then held in place by connective cells known as osteoblasts.

Testosterone is vital for the production of osteoblast cells. As long as the testosterone levels are high the moose continue to make the osteoblasts that support the antlers.

Once those hormone levels start to fall the production of the osteoblast cells stops. This means the antler attachment becomes weak and naturally starts to separate.

With no supports to hold up the massive weight of the antlers then gravity helps in the process of them falling off. Think of this process as the same way we lose our teeth.

When do moose shed their antlers?

Moose shed their antlers in the wintertime as the mating (rutting) season is usually finished by then. December and January are the most common times for moose to cast their antlers.

Although the time of year that each moose will shed their antlers will vary. That’s because some moose may have higher testosterone levels for longer than others.

Dominant males are the ones who will mate with several female moose during the rutting season. They have naturally higher testosterone levels which are evident from larger, heavier antlers.

It’s not unusual for these males to keep their antlers until February or early March due to their high hormone levels.

That means that older moose will drop their antler much earlier into the winter season than the younger, dominant males.

Moose that live further north also shed their antler a lot sooner than those in more southern regions. That’s because their antlers are a disadvantage to their survival in the harsh snowy conditions.

Injury and food availability can also impact when the moose sheds their antlers. This may delay or speed up the process depending on how it impacts the health of the moose.

How often do moose shed their antlers?

Moose will only shed their antlers once a year and it is a cyclical process.

The antler growth cycle starts in early spring. Rising testosterone levels stimulate the osteoblast cells. The antlers start to form rapidly and are known to be one of the fastest-growing tissues in the animal kingdom.

It takes around 5 months for the moose antlers to be fully grown for the rutting season. The antler will be covered in a soft velvet protective layer as they grow.

Once they are formed this velvet layer starts to shed. The moose speed this up by rubbing their antlers onto trees.

If a male moose is castrated either on purpose or through injury they will shed their antlers within two weeks. A new set of peruke antlers will grow back in their place. These antlers appear deformed and never shed. That’s because the reduced levels of testosterone are no longer available to control the growth and shed cycle. These antlers are made from living bone rather than the dead bone of a non-castrated male.

The antlers get larger and larger on the males every year until they reach their prime at about 10 years old. After this age, the antlers start to grow back smaller and smaller each year.

What happens to Shed Moose antlers?

Shed moose antlers will drop onto the ground. As a bone structure, they are larger and heavy and will usually stay where they fall.

Moose live in meadows and forested areas, which is where shed antlers can be found.

The moose and other animals within the area will make use of the cast antlers as a food source. The antlers are full of proteins and minerals such as calcium. This will provide other wildlife with nutrients to keep them healthy.

Animals that east moose antlers include:

For antlers to grow the moose needs to be able to produce testosterone. This is a hormone that only the male moose will produce.

To wrap up, male moose do shed their antlers. They will do this once a year in the winter after the breeding season is over.

Moose cast their antlers as they no longer need them for attracting or warding off other males when they are trying to mate. Antlers are heavy and use up a lot of energy. By shedding them the moose are able to conserve energy and flee predators in poor weather conditions.

Moose antlers are controlled by their hormone levels and will follow a cyclical pattern of growth and shedding each year. This pattern slows as they get older and get past their prime.

Shed antlers are beneficial for other wildlife too. Antlers are a large food source full of nutrients for a variety of animals who are struggling in the winter months.