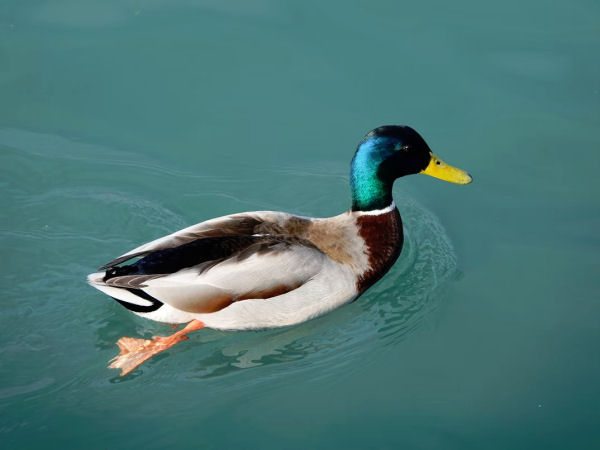 Ducks are popular birds you’ll see near ponds, lakes, and wetlands in your area. You may have noticed that like most birds, it’s quite difficult to tell how old an adult duck is. That’s probably left you wondering how long do ducks live in the wild?

The average life expectancy of a wild duck is 5-10 years. Most ducks will die as infants before they reach the age of one. The breed of the duck plays a large role in how long they live. Other factors such as their health, diet, and environment affect their survival.

If you want to know more about what affects the ducks’ lifespan, then keep reading.

This guide will take you through all you need to know about the challenges that ducks face to survive. You’ll also learn about the age differences between species and also how you can help ducks live longer.

How long do ducks live in the wild?

Now you may be wondering why there is such a big difference in the life span of these wild ducks. Because that means that some ducks can live up to 3 times longer than others.

The main reason for this huge difference is that some ducks have much better living conditions than others. If a duck’s living conditions are optimal then a duck can expect to live a long and healthy life. If not then the duck is exposed to danger or poor health and is likely to die a lot younger.

Ducks are most vulnerable when they are ducklings. In fact, around 30-70% of baby ducks will die in the first three months of life.

Once they are passed the first 3 month period their survival rate improves a little. This is mainly because they can start to fly.

Let’s take a look at the things that affect a duck’s lifespan.

Why do Ducks die?

The species of duck can play a huge role in how long they will survive in the wild. The reason is because of the different living conditions they are exposed to.

Let’s look at the average age ranges of some of the most common duck species.

Ducks are medium-sized birds. They live longer than smaller bird species such as songbirds, but not as long as larger birds such as geese. That’s because the smaller the bird, the faster their metabolism and the quicker they wear out.

There is generally no difference between male and female duck survival rates. Males tend to die more due to territorial aggression. Female ducks are at greater risk of injury from aggressive males during mating season.

Ducks have a varied diet but mainly eat aquatic vegetation and insects. Their diet will change with what’s available to them each season.

Colder seasons bring the challenges of finding enough food to eat. Frozen ground and snow can make foraging hard for the ducks. During this time ducks will opt for foods that are easier to access such as sedges, acorns, and grains.

Most wild ducks are migratory and will need enough food to make long journeys. If they are unable to store enough fat from food, they won’t be able to complete their journey due to exhaustion or starvation.

Even if the ducks don’t migrate, they will need to tough out the winter and forage in harsh weather conditions. Without a regular food supply, they will starve.

Some ducks over-rely on poor quality food sources such as bread. Overeating too much nutritionally poor food can cause ducks lots of problems. You can read my guide on 8 reasons why you shouldn’t feed ducks bread.

Young ducks born later in the year are particularly vulnerable during this period. Ducklings need to learn to forage for themselves almost from birth. That means they can often die of starvation due to their foraging inexperience.

Ducks are a great food source which means they have a lot of natural predators in the wild. Their eggs and ducklings are most vulnerable in the wild.

The smaller animals will generally only take the duck eggs if they find them unattended. Although larger prey birds will also attack the young ducklings.

The mother ducks are very protective of their young due to their vulnerability. In fact, the females will even kill stray ducklings from other broods if they can.

Larger animals will attack the adult ducks to eat. They provide these animals will an excellent source of nutrition. Ducks have very poor defenses which makes them a very easy target for these larger predators. They can’t really put up much of a fight.

A duck’s health plays a large part in its chances of survival. Disease and parasites can make ducks vulnerable or even result in death.

Common diseases that ducks contract are:

Injured, starving, old, or young ducks are much more susceptible to contracting these diseases.

Ducks are very social birds which means they spend a lot of time around each other. Contagious diseases can spread very quickly amongst them. Transmission is usually through their feces or parasites easily passing between host ducks.

Wild ducks don’t have access to any medical help that domestic ducks do. A period of ill health can be deadly for them. Even if the diseases don’t kill them, they may be too slow and weak to escape predator attack.

Ducks are quite curious animals and will often wander far and wide to forage. Overexploring can make them exhausted, disorientated, and more likely to get injured.

Injured ducks are unable to fly, find food or flee from predators. Depending on the type of injury, they may be more susceptible to contracting an infection.

Male ducks can be more prone to injury when they are territorial with other males. Females may sustain more internal injuries during the mating season.

Other means of injury can be the result of human interaction. This includes collisions with vehicles, boats, aircraft, wind turbines, and power lines.

Hunting is another cause of injury for ducks. Those who aren’t killed by a gun or trap can be left with broken bones, internal injury, or large open wounds. Official figures state over 11 million ducks are killed in the USA each year by licensed hunters. Although unofficial kills mean true numbers are likely to be much higher than this.

Ducks can also become injured if they are trying to flee from a predator attack. Ducks aren’t the best at defending themselves but they may be lucky enough to fly away. However, predators with sharp claws and jaws can cause a lot of damage by then.

Ducks can survive low winter temperatures, but only to a limit.

They use various tactics to keep themselves warm. This includes using their feathers to act as a warm and waterproof layer. They can also isolate blood flow to keep only their body warm and not their legs.

But despite this, the weather can sometimes get worse than the wild ducks can withstand. Once it falls below 20 degrees the temperature becomes intolerable for ducks. They can suffer irreversible cold damage or even freeze to death from exposure.

Other forms of severe weather can also cause stress for ducks and impact their ability to find food or habitat. This includes weather such as fires, hurricanes, tornadoes, and severe storms.

Migrations are common amongst many duck species. They will travel around 800 miles to their overwintering and breeding spots at certain times of the year. This allows them to avoid the risks associated with cold climates but also gives their young a better chance of survival.

Each duck species has its own migration routes. Some will be longer and more treacherous than others.

Migrations are a risky time for ducks. It requires a lot of energy to fly hundreds of miles. This means they need to be physically prepared. An injured, starving, or diseased duck may not be able to meet those demands.

Other risks of migrations include unknown landscapes, predators, and scoping out food sources. Doing this in an unfamiliar environment can make them vulnerable, especially the ducks doing it for the first time.

How to help Ducks to live longer

As humans, we can have a big impact on a duck’s ability to survive. The good news is that there are a few ways you can be mindful of your own behavior to minimize your impact on the local ducks.

Let’s look at 4 ways you can help ducks to live longer.

Ducks are great fun to feed. Yet the most common food that is offered to ducks is stale white bread. That is a really unhealthy option for them.

Offering bread to ducks fills them up with nutritionally poor food. That can lead to physical deformities and poor health.

It’s still debatable whether you should be feeding ducks at all, as they are wild animals. They are able to forage for themselves and can do so easily.

If you do still want to feed the local ducks try offering quality birdseed or mealworms instead of leftover bread.

When you visit a local park that has ducks nearby, make sure you clean up after yourself.

This includes things such as trash, fishing equipment, balloons, or toys. Ducks are really curious and will probably try to eat most things they come across.

That can cause them injury by exploring the grassy area or even risk them choking by eating something inappropriate.

Wild ducks can be a bit of a pest if you have a pool in your yard. They may try to use it as a pond and set up home nearby.

Ducks are a protected species under the Migratory Bird Treaty Act 1918. That means you can’t cause harm to them, their eggs, or their nests.

You can however take steps to scare them aware without causing long-term harm. This causes the ducks to think the area is unsafe and will nest elsewhere.

Simple scare tactics such as motion sprinklers, automatic pool cleaners, or even fake birds of prey can keep ducks from setting up homes in your yard.

If you have found a sick, orphaned, or injured duck or duckling then the best thing to do is call a wildlife rehabber.

They will be able to give you advice on what to do. They may be able to provide some care for the duck and release it back into the wild.

Don’t try to trap the duck yourself, leave it in situ, stay close by and alert the rehabber to its location. Otherwise, you may put the duck at risk of injury.

This data has been collected from banded birds that have been monitored closely by ornithologists. A banded widgeon was last recorded as living to 34 years and 7 months in 1996.

Although, living to this age is rare. If the conditions are right for a wild duck then it is certainly possible for them to live 30 years. This means having access to a suitable diet, predator protection, and shelter.

Wild ducks will typically live from 5 to 10 years old. The average ages are lowered due to the high death rate of ducklings.

Living in ideal conditions will help to extend the duck’s life as long as possible. Being familiar with an environment will help with foraging, migrations, and predator awareness.

Yet other challenges such as disease, injury, and human interference can all play a part in the ducks’ ability to survive longer.

Minimizing the part we play as humans can go a long way toward helping ducks to thrive in their local environment.