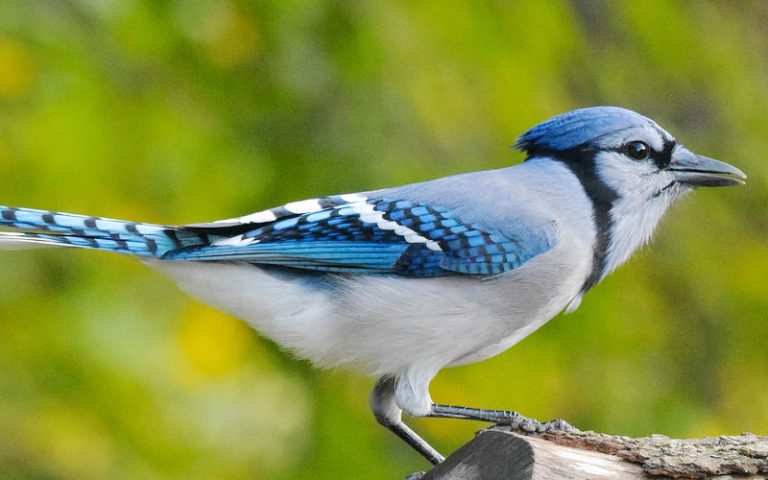 How would you like to be able to immediately identify a blue jay if it landed in your backyard?

That would be pretty cool, right?

Well, this is entirely possible, and in this guide, I’m going to show you how you can do this.

As a beginner birdwatcher, it can be tricky to know if you’ve identified the right bird.

But, this is an easy read bird ID guide. You don’t need to be an expert to follow along.

I’m going to show you how to spot different types of blue jays and the signs that they are coming to your yard. You’ll be able to spot a blue jay without having to question if you’ve got it right!

Sound good? Let’s get to it

The first thing you need to know about easily identifying a blue jay is to look at the size, shape, and color patterns on the bird.

So let’s see what an adult male blue jay will look like.

If you’ve never seen a blue jay in real life their size might surprise you.

Blues jays are a larger songbird. In comparison to other birds, they’re smaller than a crow but larger than a sparrow.

You’ll notice a blue jay is about the same size as an American Robin.

An average blue jay is:

Blue jays are crested birds. That means they have a little tuft of feathers sticking up on the top of their head.

You may notice they lower their crest when they are feeding.

As the name suggests, you won’t be surprised to find that the upper feathers of a blue jay are striking blue. This spans from the head down to the tail.

The wings and tail feathers have a pattern of black and white bands over the blue.

A blue jay will have a white face with a black collar. That means they have a black ring shape around their neck and up to the head.

Believe it or not, it’s thought that that black collar is how blue jays recognize each other.

Blue jays have light grey and white feathers underneath. These will look softer and fluffier than the blue feathers.

Now let’s have a look at the female of the species.

But what about the females?

You read that right. There is no physical difference between a female and a male blue jay.

That’s quite unusual as other blue-colored male birds will usually have brighter feathers.

So what’s the secret?

It turns out that birds actually have eyes that are better at detecting the differences in their color.

So the birds can see the difference between a male and female blue jay but us mere humans can’t.

Also, If you see a pair of male and female blue jays side by side you’ll notice that the male is slightly larger. But this is difficult to detect when they are alone.

By now you’re probably wondering: ‘how you tell them apart?’

Well, you have to watch their behaviors.

This is more noticeable if you have a blue jay nest nearby. The male will always be the food delivery guy and the female the one that sits on the eggs.

Another great way to figure out the sex of a blue jay is by their calls.

Female blue jays make a rattle call whilst bobbing up and down.

Male blue jays make ‘the squeaky gate’ call. It’s quite distinctive because it does sound exactly like a squeaky gate!

Have a listen for yourself

It can be easy to get blue jays confused with other birds when you’re starting out.

That’s simply because there are other common blue backyard birds that look similar to a blue jay. This might be because it’s another Jay species or they are simply blue in color.

The most common birds that you make mix up with a blue jay are:

Blue Jays feathers are mainly blue with blank bands. You’ll notice some blue jay feathers have a white tip or are half dark grey.

Each feather will vary in how many black bands or how much white tip, depending on its position in the wing or tail.

That bright color you’re seeing is a trick your eyes play on you as the structure of the feather catches the light.

If you crushed a blue jay feather and damaged the structure you’ll notice it’s actually brown or grey in color.

This depends on what age of baby blue jay you’re thinking about.

A hatchling will be bald and impossible to identify as a blue jay unless you know it’s a blue jay nest.

A nestling blue jay will be mostly a dark fluffy grey. As they get a little older you’ll start to see some tell-tale sign of blue on the tip of their wings.

A fledgling blue jay (around 3 weeks old) is very cute indeed. Their blue wings are a big giveaway that they are a blue jay.

However, you’ll notice the rest of their coloring is quite different. Instead of a blue head, white face, and black collar there will be a lot of grey or brown fluffy feathers.

You’ll also notice a baby blue jay doesn’t have the long thick blue tail feathers that an adult does.

And their beak, legs, and feet tend to be lighter in color than an adult blue jay.

Blue Jays eggs can be a beautiful muted tiffany blue color. However, they can range from blue to light brown.

Some eggs are a solid color and other eggs have brown speckles over the shell.

They make their nests in an open cup shape using twigs and grass. You may sometimes see mud and roots used to line the outside of the nest.

You’ll find a blue jay nest around 10-15 feet off the ground in the thick branches of a tree.

Blue Jays are quite easy to identify when you know how.

This guide has shown you how to spot a blue jay by its size, shape, and color.

You may also be able to work on watching their behavior to tell the difference between the male and the females.

That can be quite tricky for a beginner but keep working at it.

Let me know in the comments below if you have blue jays visiting your backyard.