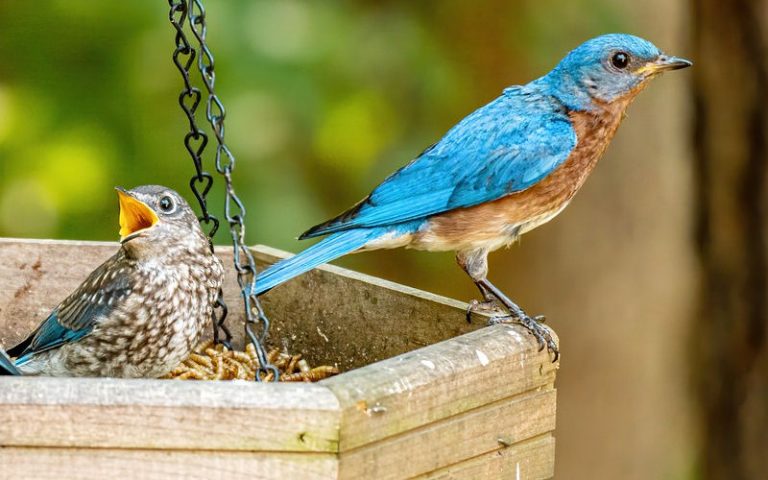 Are you wondering ‘What does a bluebird look like?’

I’m gonna guess you’re struggling to identify a bird in your backyard?

Believe it or not, all birdwatchers, even the pros, find it difficult to pinpoint the exact bird they’ve seen.

Let’s be honest, you can easily get hung up on it and let it ruin your enjoyment of birdwatching.

The key is to learn as much as you can about common bird species, like the bluebird.

And this guide is going to help you learn all you need to know about identifying the most common backyard variety: the eastern bluebird.

Well, this is entirely possible, and in this guide, I’m going to show you how you can do this.

And don’t worry, you don’t need to be an expert to follow along.

I’m going to show you how to spot different types of bluebirds and the signs that they are coming to your yard. You’ll be able to spot a bluebird without having to question if you’ve got it right!

The first thing you need to know about easily identifying an eastern bluebird is the look at the size, shape, and color patterns.

Eastern bluebirds are small birds. In comparison to other birds, they’re smaller than an American Robin but larger than a sparrow.

An average Bluebirds is:

Bluebirds are a type of thrush. That means they have small rounded heads and plump little bodies.

You’ll notice that bluebirds have long feathers but short tails.

They also have small feet which makes it easy for them to perch.

You’d think from the name that bluebirds were completely blue. But, they have a variety of colors.

The male bluebirds have bright blue top feathers from the face right down to their tail.

Then on their throat and breast, you’ll notice beautiful rusty orange or muted red feathers.

The under feathers are an off-white light grey color.

The beak, legs, and feet are dark grey or black.

Now let’s have a look at the female of the species.

So the best way you’ll be able to tell them apart is by their coloring.

Female bluebirds can be a bit trickier to spot as they aren’t as brightly colored as the males.

The female bluebird is mostly light brown or grey feathers. But they do have a little flash of that beautiful blue on the tips of their wings.

Misidentifying an eastern bluebird is common as there are other birds that look similar.

You’ll find this is usually another thrush type of bird or a blue-colored bird.

The most common birds that you make mix up with eastern bluebirds are:

You may even find you confuse immature female bluebirds with sparrows. This is mostly due to their underdeveloped size and coloring.

Bluebirds’ feathers are quite distinctive. They are usually pure blue feathers with no other distinctive markings.

A bluebird feather is around 1-2inches (3-6cm) in length depending on the part of the bird it comes from.

This depends on what age of baby bluebirds you’re thinking about.

A hatchling will be bald but they are often pink with grey patches and a bright yellow beak.

A nestling bluebird will be mostly a dark fluffy grey. They start to develop the blue tip on their wings quickly. You’ll notice this when they are around 5-7 days old.

A fledgling bluebird (around 3 weeks old) is quite similar to a female bluebird. They are mainly grey with blue tips on their wings.

A juvenile bluebird looks different from an adult female as they have quite distinctive white spots over their wings and breast.

Usually, they are just short of 1inch (2.5cm) long and 0.7in (2cm) wide. So roughly around the size of a penny or sometimes a nickel.

Bluebird’s eggs are a lovely shade of blue, similar to a robin’s egg.

You’ll notice a bluebird’s eggs are solid in color and don’t have any color variations or markings such as speckles.

Bluebirds have a typical-looking bird nest. But you’ll find it difficult to see one without searching as bluebirds like to nest in cavities.

A bluebird’s nest is a typical cup shape, made of neatly woven grass and pine needles.

Bluebirds are also known to add extra insulation to their nest using feathers, fur, or long hair they find from other animals.

A good cavity for a bluebird is usually in an old oak or pine tree. Old woodpecker holes and bird boxes are other favorite places for bluebirds to nest. These cavities can be anything from 2-50ft off the ground.

Other ways to identify a Bluebird

Although appearance is the most common way to identify a bluebird, there are other ways you can confirm your suspicions.

This includes sounds and behaviors.

Let’s look at what you’ll see and hear from bluebird in your yard.

Bluebirds have several to communicate but these are mainly soft and low-pitched.

They also sing soft-toned songs which are quite short lasting.

These calls and songs can be a bit louder and harsher when courting mates, chasing intruders, or confronting predators.

Have a listen to some eastern bluebird sounds to hear if they are familiar in your yard.

An eastern bluebird will mostly be found on the ground foraging around for insects.

Bluebirds are generally friendly birds and aggression is mainly during mating and nesting season. Males may sometimes be seen fighting with other cavity-nesting birds.

In fact, bluebirds are partial to a bit of human contact and won’t be scared to feed or nest near your home.

If you want to attract eastern bluebirds to your backyard to watch I’d highly recommend serving up mealworms in your feeders. Bluebirds go crazy for a mealworm offering.

This guide has shown you how to easily identify bluebirds that visit your backyard.

Start with size, shape, and coloring.

Remember that male, female, and baby bluebirds all have different coloring. It’s easy to confuse them for another bird species.

If you’re still unsure listen to the noises they make and watch how they behave.

You’ll be spotting bluebirds with ease in no time.

Let me know in the comments below if you have bluebirds visiting your backyard.