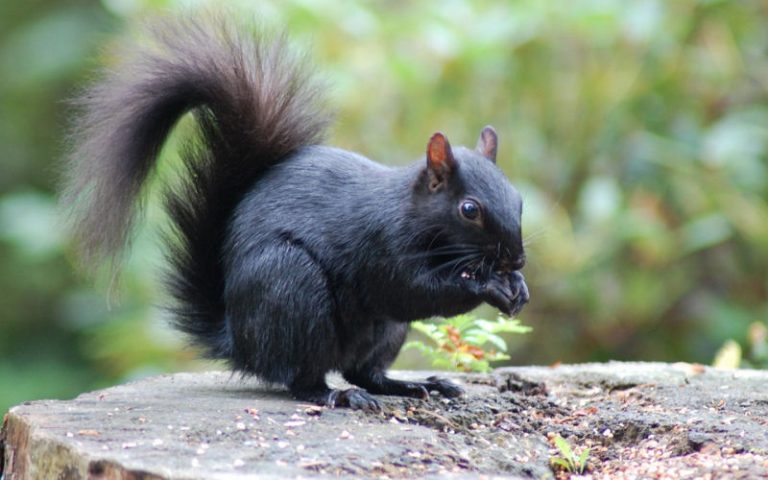 Black Squirrels are uncommon in the USA. Around 1% of the squirrel population has black fur. Northern and south-eastern areas of the USA will see higher rates of black squirrels in the wild. Black squirrels are not a species on their own. They are a subgroup of existing species such as grey, red, ground, and flying squirrels.

Let’s take a further look into what black squirrels are, and why they are not as common as other squirrel colors.

Why are Some Squirrels Black?

This variation in fur color is what is known as a melanistic subgroup. This just means a regular animal that has black coloring.

Think of melanism as being the opposite of albinism. There is an overproduction of melanin in the body rather than an underproduction like albinism. Melanism is rarer in nature than albinism.

Black fur is most common amongst eastern grey squirrels and fox squirrels.

The black morph is caused by a genetic mutation when the squirrels mate. These abnormal pigment genes result in black-furred squirrels. The black gene is dominant which means if it’s present in one parent more likely to show in any squirrel kits.

Squirrels can be fully jet black, or may even present as normal colored with black patches over their body.

Where do black squirrels live?

You’ll find that black eastern grey squirrels are much more common in northern US states and lower regions of Canada, such as Ontario.

Black fox squirrels are much more common in south-eastern states.

Michigan is the state with the highest percentage of black squirrels. It’s thought that up to 56% of 5squirrels in Michigan are black morphs.

Black squirrels are also known to occur in large numbers around Council Bluff in Iowa and along the Missouri River.

Black squirrels are also found in the UK. This is mainly confined to the Bedfordshire, Hertfordshire, and Cambridgeshire areas of England.

Benefits of Black Fur For Squirrels

It’s unclear why the black morph gene mutation has occurred amongst squirrels.

There are benefits to their black fur. Let’s take a look.

One theory is the black fur helps squirrels in colder northern climates. Black colors are known to keep more heat. This can help survival in cold weather conditions as tree squirrels don’t hibernate in winter.

This may be true for the black morph grey squirrels living in the northern states and Canada.

Grey squirrels have a really good advantage at hiding themselves amongst trees that shed their leaves (deciduous).

Black morph squirrels have a better advantage at hiding themselves well from predators in thicker evergreen trees.

With fox squirrels, it’s thought that the black morph helps these squirrels to be concealed better when they are moving, rather than standing still.

Some scientists believe that black squirrels have higher immunity than their non-black counterparts.

Although science needs more evidence to support this theory. Black squirrels appear to survive in harsher conditions and have less death from disease.

In nature, melanistic species are much more aggressive. This is usually because they have higher testosterone levels.

Although there are no official studies to prove this theory yet. Anecdotal information from scientists and wildlife observes have noted that black squirrels have much more aggressive behavior.

This aggression may help them to survive in the wild when common squirrel species try to attack the black morphs.

Black squirrels also don’t appear to be as skittish around humans as other squirrel species.

As black squirrels are quite uncommon to see, you may think yourself lucky to witness a rarity in nature.

In Native American stories, a black squirrel is associated with solar eclipse events.

Native Americans often associate squirrels with messengers that bring warnings and threats. Because of this, a black squirrel is not a sign of good luck in Native American culture.

The city of Marysville in Kanas has a black squirrel as their official town mascot. Marysville call themselves the Black Squirrel City. The Black Squirrel Parade is the annual celebration they hold each year. which features 21 five-foot squirrels all around town which are decorated by local artists.

There is legislation in some states such as Kansas and Iowa which makes it illegal to ‘annoy, worry, maim, injure or kill a black squirrel.’

Just like the grey squirrels, black morphs present a danger to red squirrel populations. Not only is this because they are more aggressive, but they will eat their food source.

Red squirrels have quite a specific diet compared to other types of squirrels. If grey and black squirrels eat the red squirrels found resource, it makes it harder for them to thrive in an area. Check out my article to find out more about what squirrels eat.

Black squirrels aren’t rare but they are uncommon. You’ll find one black squirrel for every 10,000 squirrels in the United States.

Black squirrels are simply a black version of common species found around the USA. The only difference is they have a black pigment gene which makes their fur a different color. Or sometimes a mix.

Black squirrels are growing in their numbers. This may be because they have a genetic advantage to survive in colder areas such as the north.

Black squirrels can be quite a treat to see and are much loves in common culture by certain areas in the USA.