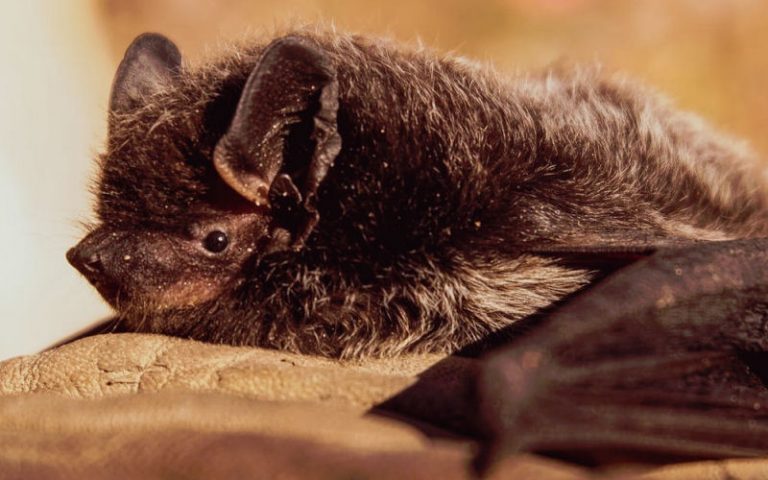 You’ve heard the phrase ‘as blind as a bat’ right? But don’t bats catch tiny little insects in the dark night? All this confusion has left you wondering, do bats have good eyesight?

Bats have excellent eyesight in low light levels. As nocturnal animals, this helps bats to see better at night. Bats rely on vision along with other senses such as smell and sound, to help them find good food sources. Large fruit bats have big eyes which can see three times better than the human eye.

Now you may be curious about why people say that bats are blind. And you probably want to know a little bit more about how bats use their eyesight and other senses. This guide will take you through everything you want to know about a bat’s sense of sight.

Sound good? Then let’s get going.

As Blind As a Bat?

Bat eyesight gets a pretty bad reputation because of the phrase ‘as blind as a bat’. This is usually used when someone where glasses or can’t see very well. So are bats blind?

Bats are not blind. As a general rule, they have eyesight that adjusts to low light levels. Bats will use their eyesight along with their echolocation skills and sense of smell to forage for food at night.

So if a bat can see really well, why are they believed to be blind?

The phrase blind as a bat evolved from an Aristotle quote on ignorance. The actual quote mentions how bats cannot see so well in the daylight. The phrase became popular as people believed bats are uncoordinated when they fly, meaning they couldn’t see too well.

How Good is Bat eyesight?

Bats rely on their eyes to see and forage for food, like all other mammals.

A bat’s eyes are very different from human eyes. They don’t need to see the different range of colors that we do. That’s because they hunt during the nights, and colors aren’t much use to them in the dark.

There are two categories of bats which have different kinds of eyesight.

Larger bats species are known as macrobats and have a diet of mainly fruit and nectar.  Macrobats have evolved to have very large eyes which they need to forage for fruit and nectar during the nights. They use their eyes together with their sense of smell.

Large fruit bats will navigate their environment by vision only. To do this they need the moon to help provide some light. On nights when the moonlight levels are low fruit bats are unable to fly and will go hungry.

Macrobats can also see well in the daylight. Young foxes can also be seen flying around as a type of training session for the night.

Fruit bats have owls and hawks are their main predators and rely on vision to detect an imminent attack on their treetop roosts.

Smaller bat species are known as microbats and have a diet of mainly insects. This bat species have little eyes with very sensitive night vision. They need this for targeting small, fast-moving insects during low light conditions.

Although microbats seem erratic when flying around, this is because they are catching several insects that you can’t see, but they can. Bats need to eat thousands of insects each day to stay healthy and prepare for hibernating in winter.

Bats have really poor color perception. That’s because the color is pretty useless to bats in low-light conditions.

Although bats can see color well, some species can see in ultraviolet light. It’s thought that bats use UV light to navigate better during the night hours. Although UV light is less during the night, the moon helps to provide low levels for bats.

Seeing UV light levels can also help bats to detect how many insects will be available during the night. This works the same way as heavy rainfall and poor weather conditions making the insects hide away.

For fruit and nectar-feeding bats, UV detection is used for finding flowers that reflect UV light. This helps the flowers to essentially light up and night to help the bats to locate good nectar sources.

Bats rely heavily on their eyesight for moving around and finding food. However, they need to use their eyes along with other senses to function as best as they can.

Let’s look at the other senses bats use to assist their visual skills.

Bats are well known for their excellent hearing skills. Bats have a special type of hearing known as Echolocation. This allows bats to produce small sound waves (ultrasounds) from their nose, which bounce off objects around them. These waves bounce back to the bats’ ears and give them lots of feedback information on what’s around them.

Echolocation helps bats to determine the location, speed, and size of environmental objects and food sources near to them.

Bats can hear at frequencies up to 200kHz. Compared to humans only hearing up to 20kHz then a bat’s hearing is outstanding.

Bats can use their echolocation skills to detect items as far as 55ft (17m) away from them. Any further than this a bat uses their eyesight to detect potential landmarks or even predators.

Fruit bats don’t use echolocation to find food. They will use vision and smells to navigate.

Fruit bats have adapted their sense of smell much more than the microbat species.

As fruit bat don’t use their noses for echolocation, they have adapted them to improve their sense of smell.

Microbats can also use their sense of smell to detect food sources too. This is mainly seen in the vampire bats species that drink blood. These bat species have special infrared senses around their nose that can pick up the heat from an animal’s blood. This helps them to locate large animals to feed on during the night as they sleep.

Can Bats see during the day?

Bats can see during the day. They do have color perception but it’s limited to only seeing two spectrums at a time. This limits their color perception and they don’t see in as many colors as humans do.

Although this may seem a disadvantage, it’s not really. That’s because bats are nocturnal and are mainly active in low-light conditions. Normal color spectrums are not as useful for mammals when there is little light.

Bats may be perceived as unable to see in the daylight due to erratic flying patterns. However, that’s because it’s unusual for bats to be seen in the day.

If a bat is seen in the day it’s likely to be young or disorientated. Either way that lack of coordination is due to the bat being lost, rather than it having poor eyesight.

So to wrap it up, you now know that contrary to popular belief, bats actually have excellent eyesight. They will use this along with their other senses such as sound and smell to find food and keep themselves safe from predators.

Bats have adapted their eyesight for foraging during the night rather than in the day. Bats don’t have good color perceptions, but, some species can detect UV light and infrared light to find food.

These body adjustments have helped bats to adapt to local food sources and help their species to survive in environments all over the world.