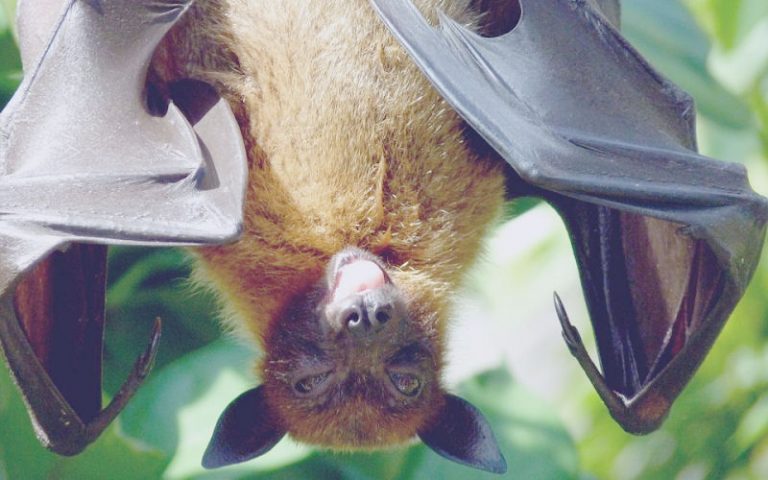 Bats have a pretty bad reputation for being flying bloodsuckers. If you’ve seen bats flying around in your local area, you’re probably wondering what do bats eat?

Most bats are insectivores which means the majority of their diet is made up of eating a variety of insects. There are thousands of bat species worldwide with varying diets depending on their size and the climate they live in. Small bats (microbats) are mainly carnivorous and eat insects, fish, small animals, amphibians, and reptiles. Large bats (megabats) are mainly frugivorous eating fruits, seeds, leaves, nectar, pollen, and insects as a supplement.

The good news is that bats are not interested in biting your neck and draining your blood!

And I bet you’re intrigued by the fact that bats eat fish, frogs, and fruit. This guide will take you through everything you want to know about a bat’s diet.

Sound good? Then let’s get started.

What Do Bats Eat In The Wild?

Bats tend to eat bugs that are considered pests. This includes mosquitoes, spiders, June bugs, crickets, locusts, fruit flies, and gnats. These bugs tend to be more active at night when the bats like to forage. Bats don’t eat many bees or butterflies as these insects are most active during the day when bats are asleep.

A bat can eat thousands of insects in one night. They need that amount of energy to forage, mate and prepare for hibernation in the winter.

It may seem impossible to find thousands of bugs each night. However, bats can easily do this by using their echolocation skills. These sound pulses help bats detect and attack even the tiniest of flies in the pitch-black night.

The fact that bats eat so many insects is a huge benefit to people. It not only helps reduce the spread of disease but also stops insects from destroying essential food crops.

Some bat species have a preference for eating fruit over insects. These bats are usually larger macrobats, although some microbats are also fruit eaters. A bat that eats mainly fruit is known as frugivorous.

Most fruit-eating bats live in warm climates where lots of soft, sweet fruits grow all year round.

The type of fruit that bats eat include:

These foods are high in sugars, nutrients, water, and fats that help the bats to thrive.

Fruit bats don’t need to rely on echolocation to source their food. They have larger eyes and a good sense of smell to forage for fruit.

Fruit bats can eat the fruit directly from the plant or tree while in flight, or they can carry it can eat it when landed.

Fruit bats don’t eat the whole fruit. They really only want the fruit juice inside. Once they chew the fruit flesh to release the juice they will spit out the pulp and seeds.

The good news is that the bats do manage to consume some fruit seeds. That means they help with the dispersal of fruit seeds when they fly off and poop them out.

Some bat species are nectivorous which means they use plant nectar as the main food source. These bats are usually fruit eaters too.

Nectar-eating bats have different facial structures to eat nectar easily. They have longer noses and tongues which they use to source the sweet nectar from flowers. As the bats eat the nectar they will also consume some pollen from the plants.

As nectar and fruit-eating bats don’t rely on insects they need a good protein source. Pollen is a source of protein for nectar-eating bats.

Certain plants have adapted to only flower at night to allow bats to feed on their nectar and pollen.

There are two species of bats that rely mainly on nectar to eat. These are the lesser long-nosed bat and the Mexican long-tongued bat. Yet, many leaf-nosed bats will eat fruit and nectar as part of their diet.

In the USA bats will often source their nectar by raid hummingbird feeders at night. If you find your nectar feeders are being drained at night, it’s likely bats are the culprits.

Some bat species have evolved to catching small frogs and lizards to eat.

The Fringe-lipped bat is also known as the frog-eating bat. They will eat not only frogs but insects and lizards too. These frogs can distinguish between poisonous and non-poisonous frogs.

Frog-eating bats will fly up and down near rivers and ponds listening out for the calls of the frog or reptiles. Once the bat finds its prey they swoop down and immobilize them with a bite. They will then fly off and eat their prey when perched.

To locate their prey, these bats have large ears which help them to hear well. They also have sharpened teeth to bite and long claws which can help them to carry their victims away.

Species of bats that eat frogs and lizards do not live in the USA. They are mainly found in southern American countries.

The most well-known fish-eating bat species is the bulldog bat. This species is found in Central and South America. The bulldog bat is so good at catching fish its nickname is ‘the fisherman’. The most common fish it likes to catch are anchovies, thread herring, and silversides.

Fish-eating bats use their echolocation to detect fish using ripples near the surface. They then swoop in and catch the fish with their claws. They can pull larger fish out of the water and carry them in their mouths to land and eat. Small fish can be eaten right away, like insects.

Not all bats have the ability to catch fish. That’s because fish-eating bat species have adapted their feet and jaws. This gives them strong, sharp claws and better bite to catch fish easily.

Meat-eating bats do exist. Although they only make up around 1% of the worldwide bat species. These carnivorous bats have adapted to eat small animals such as rodents and birds as part of their diet.

The most well-known carnivorous bat is the spectral bat, also known as the false vampire. This species is found in South and Central America.

Meat-eating bats are very similar to owls when locating and catching their food. They stalk their prey from the sky then swoop down, hook their prey and kill them by biting their skull. Often prey is taken back to roosts to feed other bats.

Meat-eating bats have adapted their wings to carry heavier animals. They also have larger noses to sniff out prey. As well as larger jaws and claws to grab and maim.

There are three known species of bats that drink blood. Although the myth of bloodsucking bats may seem true, it’s only partially true.

Blood drinking bats are known as vampire bats, as their diet is mainly made up of blood. They don’t bite and suck blood. Rather they make a small cut in the skin and lap the oozing blood, like how a cat or a dog drinks water.

Blood provides these bats with a good source of protein, salts, and nutrients to survive.

Contrary to popular vampire stories, blood-drinking bats rarely prey on humans. They much prefer to drink the blood of sleeping livestock such as cows and horses.

They will land on their victim and feed for around 30 minutes. Vampire bats are small and don’t drink enough blood to harm their prey.

Vampire bats can heat-seeking noses that detect flowing blood in animals. They have adaptive to have razor-sharp teeth to draw blood easily. Their saliva help to prevent blood from clotting as they feed.

Although the vampire bat sounds pretty creepy, their bite is pretty harmless, other than the risk of spreading disease. You’ll be happy to know they are only found in Central and South America and not the USA.

Baby bats (pups) won’t eat the same diet as adult bats. For the first 4 weeks after birth bat pups will rely on their mother’s breastmilk. They will stay with their mother and feed on them until they are old enough to forage for themselves.

As bat pups get a little older their parents may bring back food to their roost and regurgitate it into their mouths. This can help the baby bats to transition to more solid foods.

What do bats eat in winter?

Most bats will go into a period of hibernation over the winter. That’s because the cold weather makes the insects hide away and food is scarce.

Although bats hibernate they do wake for short periods of time every few weeks and forage for food. Bats will usually try to find as many insects to eat as they can during this short wakened period.

Bats will stay in a state of hibernation until around spring when the insects start to reappear.

What do bats drink?

Bats love to drink water to stay hydrated. They need a lot of water and prefer to hunt and roost near a good water source.

Open water sources such as ponds, lakes, puddles, and birdbaths are ideal for bats. They won’t drink directly from the water. Instead, they dip themselves in the water and lick the water droplets off.

A good water source is great for foraging insects and larvae near the surface.

Bats are mainly insect eaters, although their main food source will depend on the bat species. They have adapted well to sourcing foods from the environment they are living in.

Bats in the USA are mainly insect, fruit, and nectar eaters. Other species will eat small animals, fish, birds, amphibians, and reptiles. Although these species are mostly located in central and south Americas.

There are vampire bats that survive by eating animal blood. These bats are relatively harmless and are only found in central and south America.

If you want to help bats make sure your yard attracts insects with plants and bushes. A water source is always good for thirsty bats to drink from too.