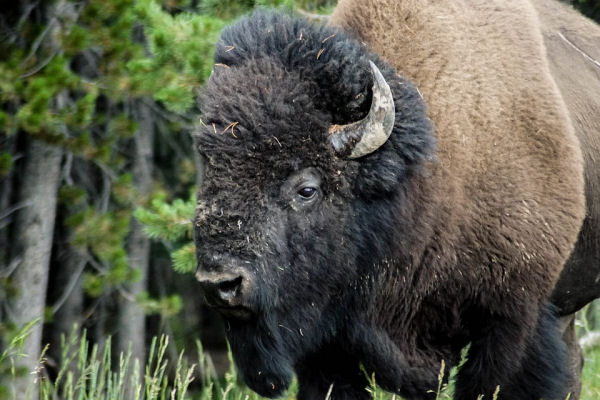 Bison are large, iconic animals that represent the national mammal of the United States. But are bison only found in the USA? What you really want to know is where do bison live?

Bison live in large prairies, plains, and valleys of the United States, Canada, Mexico, Northern Europe, and Russia. They are found mostly in national parks as conservation herds to closely track their numbers. Bison prefer to be near grasslands and forests to easily source food.

If you want to know about where Bison live then keep reading. This guide will take you through everything you know about the bison habitat. We’ll also discuss where they live in the world.

Where Do Bison Live in the wild?

Bison choose to live in habitats that have everything they need to survive. Knowing the bison’s daily habits will help you understand why they choose to live where they do.

An animal as large as a bison needs a lot of food to keep them going. A nearby food source is essential for bison as they need to eat a lot every day.

The bison diet is made up of mainly grasses. This is why bison prefer to live in large open grasslands. They also eat some other plant vegetation when grass sources are limited. They can often find this near woodland areas.

Water is essential for bison too. It’s estimated one bison needs around 8 gallons (30L) of water each day. Bison drink from temporary pools of water such as large puddles created by rainfall. Unless freshwater sources are nearby then traveling to one impacts their grazing time. Bison will use snow as a water source in winter.

Bison are social animals and live in herds.  The size of the herd varies from around 20 in winter up to 1000 during the breeding season.

Imagine the space that is required for 1000 bison!

Bison will roam up to around 2 miles every day to graze. That’s why large prairies and grasslands are preferred to give them all enough room to graze and rest.

What kind of shelter do bison need?

Bison don’t need any kind of outdoor shelter in the wild. They will simply hunker down in the cold weather and may even face directly into a storm until it passes.

Although bison don’t need shelter they may stay close to a forested area or in a valley during bad weather. These landscapes offer a natural barrier against harsh weather such as snow, winds, and rains.

This is quite an unusual trait as most animals need shelter from bad weather or even predators. The amazing thing about bison is they have adapted to survive without shelter.

Their large bodies, fat layers, and thick coats allow them to see out even the worst weather. They also don’t need to worry too much about predators as their size and herd will offer them a lot of protection.

Trying to find a natural area of cover large enough to fit a herd of bison would also be quite difficult.

Where do bison live in the world?

Bison are native to the USA, Canada, and Europe.

Let’s look at the Bison range in each area.

Where do Bison live in the US?

There are only one subspecies of bison that can be found in the USA. This is the American bison or plains bison and more formally known as bison bison. They are also known as buffalo in many parts of the USA, however, this shouldn’t be confused with water buffalo.

Most Wild bison now only live in national parks around various parts of the USA. Although bison ranches do exist on private land, these bison are not considered domesticated.

Native American reservations are also home to bison herds, as they remain an important part of their culture.

Although numbers are a fraction of what they once were, you can find bison in all 50 states including Alaska and Hawaii.

South Dakota is the state with the largest bison populations. Other states with large populations include Nebraska, Montana, Colorado, and Oklahoma. In fact, the bison is the state animal of Oklahoma.

The plains bison have been introduced to several areas of the USA they are not native to. This includes Alaska, Hawaii, and the Catalina Islands in California.

A small number of wood bison are being introduced to their native lands in Alaska.

Where to see Bison in the USA

Bison can be found in various places in the United States. This is a list of well-known locations with large wild roaming herds.

Where do bison live in Mexico?

Hundreds of years ago bison ranged over the majority of the central and eastern USA and down into Mexico. Overhunting resulted in many sub-species going extinct until only the plains bison species remained in the United States.

There are now three thriving herds of bison in Mexico. The Janos-Hidalgo bison herd has migrated between the US and Mexico for over 100 years.

Conservationists are attempting to re-introduce bison to Mexico. A herd of 23 bison was introduced from the wind cave herd in South Dakota to the Janos Biosphere Reserve in 2009. This herd is known as the new Janos reserve herd. Their population numbers were estimated to be around 138 bison in 2017.

In 2020, 19 of the bison from the Janos reserve were transported to the Maderas del Carmen reserve. This has helped to further establish a wild bison population in Mexico.

Where do bison live in Canada?

Unlike the USA, Canada is home to two subspecies of bison: the plains bison and the wood bison (bison athabascae).

In the late 1800s, there were no wild bison left in Canada after hunting extinction. They have slowly been reintroduced to the area with conservation effort since 1905.

Bison are now found in the following regions of Canada:

The largest population of bison in Canada is found on the wood buffalo national park over the Alberta and Northwest Territories. Although the bison is that national animal of the Manitoba province.

The Canadian population of wild plains bison is around 2200. The wood bison population in Canada is estimated to be around 3-5 times larger at 7000-11,000.

Where to see Bison in Canada

Commercial ranches account for large populations of bison across Canada. You can see wild bison roaming in various national parks across the country. This is a list of a few of the most popular parks to view roaming bison herds.

Where do bison live in Europe?

There is a different subspecies of bison which is native to Europe. This is known as the European bison or bison bonasus. Bison are also commonly known as Wisents in many parts of Europe.

Like populations in the USA, the European bison once roamed most of mainland Europe and spread into Asia.  Most bison were made extinct due to overhunting in the 19th century.

The bonasus subspecies are the last remaining. Conservation efforts over the last few decades, have changed them from endangered status to near threatened.

Most European bison reside in large national parks to help protect the species.

The largest European bison population can be found in the Białowieża National Park which neighbors Poland and Belarus.

There are 9 other countries in mainland Europe that have a population of over 100 wild European bison. You can learn where they can be found in the table below.

Bison can also be found in a few other countries in Europe but their population sizes are only in single or double digits. A few of these countries are working on captive breeding programs for bison to eventually increase their numbers in the wild.

Smaller bison populations can be found in:

Where to see Bison in Europe

There are some bison that are free-roaming in various places over Europe. Other herds are managed within national parks to help the populations thrive. These are a few places you can see bison herds over Europe.

What Climate do Bison live in?

Bison live in temperate climates in the northern hemisphere. They can live through both hot summers and freezing cold winters.

Bison have adapted well to living in extremely low temperatures in the north of the Americas and Europe. In fact, they don’t feel any effect of the cold until temperatures dip to -40°F (-40°C).

Bison can still find food in deep snowy conditions by clearing the ground with their large heads. They also have large fat stores and a thick coat to survive cold climates.

Bison can survive warm summers by shedding their coat and cooling in water sources. Migrating during the seasons helps bison to find a climate that best suits their need for food and water sources.

Where do bison live in winter?

Bison don’t hibernate in winter, as they can easily survive in cold conditions. Although they do migrate to around 70 miles from summer to winter ranges.

The bison’s winter range isn’t to warmer south, but to lower elevations. This gives them more protection as the snow isn’t as deep in these areas. They also choose a place where there is plenty of grass available from autumn growth.

Deep snow can be dangerous for bison. Moving through the deep snow can make it difficult for the Bison to escape hungry predators such as wolves. They will also use up a lot of energy trying to move a large patch of snow to get to the grass below.

Do bison live in forests?

Plains and wood bison don’t live in forests as they mainly live in grassland. Although they will occasionally pass through forested areas within their range.

European bison live in woodland areas. These habitats vary from light to fully wooded areas. Although they also live in grasslands like their American counterparts. The largest bison population of bison in Europe lives in the Białowieża Forest in Poland.

Bison are very large animals that live in the Americas and Europe. Although their populations are a fraction of the size they were before overhunting in the late 19th century.

American Bison prefer to live in grasslands, however, European bison can be found in a large numbers in forested areas.

As social creatures bison love to live in herds. That means they need a lot of space and food to keep them healthy and thriving. Efforts have been made by large parklands in the USA, Canada, Mexico, and Europe to conserve the bison population and improve their numbers in these countries.