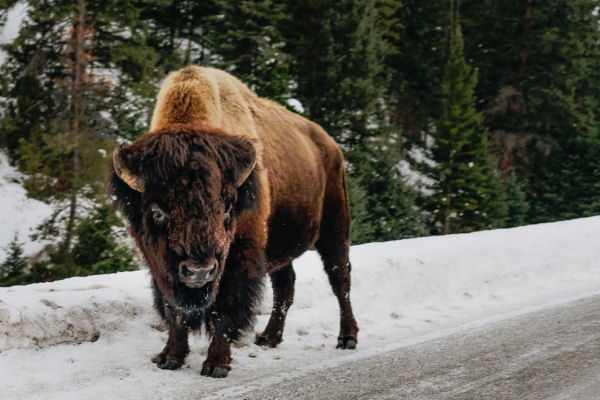 Bison are one of the largest land animals in the world. So you may expect them to live for a long time. But how long do bison live?

A wild bison will live on average between 10-20 years. Around 40% of bison die within their first year of life. The factors affecting a bison’s lifespan include health, habitat, predators, and food availability.

If you want to know more about the challenges the bison face to survive then keep reading. This guide will take you through everything you want to know about how long bison live in the wild.

How long do bison live in the wild?

Bison are extremely resilient animals and they can survive a long time despite the hardships they face. Some bison have been known to live up to 28 years old.

Yet just because a vison can live into their twenties, it doesn’t mean all bison will. Unfortunately, up to 40% of bison die before they get to one year old. This is a time when they are much more vulnerable to the harsh realities of living in the wilderness.

Once bison reach adulthood they are extremely resilient. This is why the average age of adult bison is around 15 -20 years old.

There are 3 recognized subspecies of bison living in different parts of the world, all with similar survival rates.

Let’s look at the factors that affect how long a bison will survive in the wild.

How do Bison die?

Finding enough food to sustain their massive size is a challenge for bison. They need to eat up to around 24lbs of food each day. If they can’t find enough food they’ll become malnourished and may even starve to death.

The bison diet is made up of mainly grasses. Although these can be harder to come by in deep winter snow. In that case, they will eat other foods such as woody vegetation, grains, and fungi.

Bison have adapted well to living in conditions where food sources are scarce in winter. They build fat stores and take days to digest food. This allows them to survive on less.

Yet, these safety measures only last for so long. If the bison can’t eventually find food then they will quickly lose those fat stores, become weak and vulnerable.

Add to this that bison usually live in herds, so they’re having to feed a large group rather than one bison. That’s a lot of competition for a small amount of food.

Starvation particularly affects female bison. If malnourished they are likely to be unable to conceive or miscarry.

Infant bison are also at risk of starvation if they are part of a multiple births. Female bison produce very little breastmilk and will often need to abandon one calf to ensure the survival of at least one. An abandoned baby bison will starve to death.

Even though bison are massive animals, they still remain prey for a few large animals. Predators are one of the biggest threats to the most vulnerable in the bison herds.

Adult bison can be quite hard to kill, so they are the ones that offer protection to defend the rest of the herd.

As you may expect the most vulnerable of the herd are the ones that can be easily picked off by a hungry predator. This includes the young, old, injured, and diseased bison.

Most predators will find it much easier to kill a small baby or young bison, rather than a fully grown adult. The males have size and weight on their side. Yet female bison can be extremely aggressive if they have a baby bison to protect.

Baby bison will stay in a herd with their mother until they are around 2-3 years old. The whole herd is fiercely protective of the young bison due to their vulnerability as prey.

Bison also have to contend with human predators in the form of hunters. Bison are hunted for trophies, sport, meat, and fur.

Although wild bison hunting is legal, a special permit is required. A few hundred permits are granted to kill bison each year due to conservation efforts to increase bison numbers. To get around this hunters often use private ranches which raise bison to be killed by big-game hunters.

Bison hunting remains a large part of Native American Indian culture. Permits are not required if bison are killed on Indian reservation land.

One of the largest risks to bison’s survival is their general health. As herd animals, they pass on disease and parasites easily through close contact. This leaves them vulnerable to poor health and death that can result from infections.

These diseases often cause issues such as weight loss and the inability to absorb nutrients from foods. If left untreated the bison that have these infections will usually die from the infection.

Even if the disease itself doesn’t kill the bison it may make them too weak to forage or to fight off predators. Disease such as Brucellosis often impacts the females’ ability to sustain a healthy pregnancy.

Bison that live in large parks such as Yellowstone are often immunized against some of these diseases. This stops the bison from spreading it amongst the herd in the area, or passing it to cattle out with the park.

Injury can really impact a bison’s ability to survive in the wild. An injured bison will die if it can’t flee from predators, find food, or contract an infection.

When bison have closer interactions with humans, their risk of injury greatly increases. A common cause of injury to bison is vehicle collisions. The issue is common on roads in national parks, where bison can easily walk into the path of a moving car.

Even if a bison is not killed in a car collision it is likely to sustain injury. This may be from internal injury, large open wounds, or broken bones.

Bison can also sustain injuries when they are trying to fight off predators. The animals which attack bison have sharp claws as well as powerful jaws and teeth which will cause them a bad injury.

Bison mainly live in temperate climates with both hot summers and freezing cold winters. Bison live only in the northern hemisphere.

As a species, they have adapted to survive in cold weather.  Their resilience to freezing snowstorms has made them one of the most resilient animals in the world. Their sheer size, fat stores, thick hide, and furs help them to live in snowy conditions with no shelter.

Winter exposure is often difficult for young bison to withstand. A lot of young bison are unable to see out their first winter due to their inability to withstand such low temperatures.

Adult bison may also be more susceptible to the harsh winters if they haven’t managed to put on large fat stores in the warmer months. This is often due to poor nutritional intake or disease affecting their ability to source nutrients from food.

Climate change is having an impact on the bison’s ability to find nutritionally rich food. Warmer climates result in grasses with less nitrogen which can impact the bison’s weight over time.

Hot weather can also make bison more prone to parasites. Fleas and ticks can use bison as a host, resulting in disease and poor health from infections.

How Long do bison live in captivity?

Bison held in captivity can live up to around 25 years old. Although their lifespan in captivity will depend on the reason for their captive state.

Often bison are raised in captivity for meat or hunting. These bison won’t be given the chance to live as long as 25 years. Bison farmed for meat are usually killed between 2-3 years old. Those farmed on hunting ranches are typically killed around 1.5-2 years old.

Bison kept in captivity in zoos can last for a long time. They are protected from a lot of danger they experience in the wild. They have no predators, a steady food supply, and will be treated for disease and injury.

One of the biggest challenges for keeping moose captive is the sheer size of space they need for roaming and grazing.

On average wild bison will live for around 10-20 years. Yet most bison will die within their first year of life. This is often due to predators, disease, or cold weather exposure.

Adult bison are extremely resilient but can also fall victim to disease, injury, or starvation. Humans impact on adult bison through hunting or vehicle collisions.

Although bison are kept in captivity they are often killed off within the first 1-3 years for meat or big game hunting. To ensure the populations continue to thrive conservationists need to help support them. Currently, this is done through close monitoring in national parks.